Eric Olhats, a former advisor to French forward Antoine Griezmann, has hit out at the power that Lionel Messi holds over Barcelona, saying that he has attempted to unsettle Griezmann since his arrival from Atletico Madrid.

Barcelona signed long-term target Griezmann last summer in a £107 million ($142 million / €120 million) deal after he scored more than 130 goals in a five-year stint in the Spanish capital. But Olhats claims that Messi was unsupportive of the deal, as well as being unwilling to accommodate his inclusion into the team.

“He’s at the same time emperor and monarch, and he didn’t see Antoine’s arrival with a good eye,” Olhat told French Football.

“His attitude has been deplorable, he made him feel that. I’ve always heard Antoine say there’s no problem with Messi, but never the other way around. It is the regime of terror. Either you are with him or you are against him.”

Furthermore, Olhat claims that Messi’s public wrangling with Barcelona this past summer where he attempted to engineer a move away from the Camp Nou was little more than a tool used to gauge exactly how much power he wields in the Barcelona corridors of power.

“In my eyes, Messi said he wanted to leave to see what role he still had as a decision-making player, regarding the players who arrived and those who left, but he eventually stayed. Classic Messi!” Olhat said.

“(He is) as good on the pitch as he is bad off it. Barcelona has been suffering for a while. There was a cancer in that club, and it obviously leaves some marks.”

World Cup winner Griezmann has so far endured a stop-start beginning to his Catalan career. He has found the net 17 times in just under 60 games – a respectable return, but perhaps not one that would command the type of eye-watering transfer fee agreed upon last summer.

Barcelona appears to be a club very much in transition, with repeated backroom uncertainty leading to a managerial merry-go-round in the Camp Nou dugout, with Ernesto Valverde, Quique Setien and now Ronald Koeman all having sat in the hot-seat over the course of the last year.

Furthermore, club president Josep Bartomeu recently quit the club due to the financial strife they currently find themselves embroiled in.

“It’s the club that’s sick, not him,” Olhats alleged.

“Last year, when Antoine arrived, Messi didn’t talk to him, didn’t pass him the ball.

“He created a real trauma for a more than negative adaptation. That clearly left its mark. It was clear and visible. Add to that the president stepping down, the club conceding eight against Bayern and three different managers… the conditions aren’t good.“ 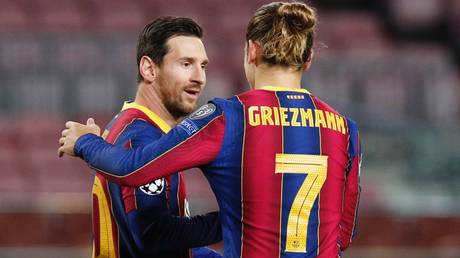 Wales SCRAPS all GCSEs and A level...