‘A damning measure of how bad things have got’: Barcelona fans fume as club hand Suarez’s No. 9 shirt to Martin Braithwaite

‘A damning measure of how bad things have got’: Barcelona fans fume as club hand Suarez’s No. 9 shirt to Martin Braithwaite

Barcelona fans were stunned on Tuesday when the club confirmed Martin Braithwaite has inherited Luis Suarez’s No. 9 shirt at the Camp Nou after the Uruguayan left for Atletico Madrid in the summer.

After the club failed to enhance their attacking options on deadline day, they confirmed the squad numbers for the season, with the Dane moving from No. 19 to the vacant No. 9.

Fans were quick to question the move as one tweeted: “That’s a damning measure of how bad the things have got at Barcelona. What a downgrade from Suarez too.”

“What the hell is Braithwate doing with that number,” another added. “That is disrespect to Suarez and the number. I don’t know what to say.”

That’s a damning measure of how bad the things have got at Barcelona. What a downgrade from Suarez too.

What the hell is Braithwate doing with that number. That is disrespect to Suarez and the number. I don’t know what to say😶

Others simply reacted with disbelief:

Another fan suggested Braithwaite himself would be confused as to how he managed to inherit a shirt number that has been worn by some iconic forwards over the years.

Braithwaite finds himself in some illustrious company in wearing Barcelona’s No. 9 shirt.

Club legends Cesar Rodriguez – who was Barca’s top scorer before Lionel Messi came along – Johan Cruyff, Romario and Ronaldo wore the number in years gone by, while more recently it has belonged to Samuel Eto’o, Zlatan Ibrahimovic, Alexis Sanchez and Suarez.

The 29-year-old has some big boots to fill, not least of all from the man who had it last.

Suarez left the Camp Nou behind only Messi and Cesar in the club’s scoring charts, having racked up 198 goals for the club.

The 33-year-old – despite being somewhat past his prime – still managed to produce 21 goals and 12 assists in 36 games last season.

Braithwaite arrived at the club from Leganes in February after Barca were authorized to make an emergency signing outside the transfer window following a long-term injury to Ousmane Dembele.

He had scored eight times in 27 matches for Leganes last season prior to his move, and he found the net just once in the 11 appearances he made for Barcelona, although most of them were from the bench.

The striker was rumored to have enquired about Messi’s No. 10 shirt in the summer after the captain put in a transfer request but he denied the speculation, which had evidently angered him.

“What do people think themselves?” he said to Danish outlet BT, Goal reported.

“Of course I did not go to the club and ask for Messi’s number. It would be so disrespectful.

“I really feel that the people who come up with these kinds of stories lack respect for a lot of people.”

Messi can paper over plenty of cracks, but Fati is just 17 and Dembele is highly injury-prone, having missed more games for the Catalan giants than he has played for them since he arrived in 2017.

Barca will hope for more from Griezmann, who scored just 15 times last season after they bought him for €120 million, but they also need Braithwaite to make the most of his opportunities when they come. 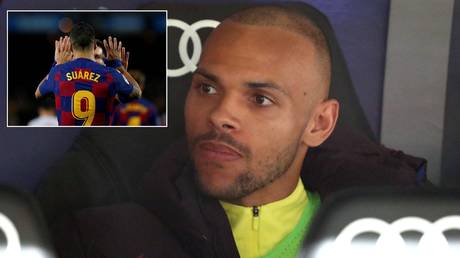