Manchester United’s World Cup-winning midfielder Paul Pogba has taken an extra step in his support of the “Black Lives Matter'” campaign which has been central to the recent resumption of the Premier League.

The French talisman, who has forged a dynamic partnership with Bruno Fernandes in the heart of the United midfield, has been a vocal proponent of the movement aimed at highlighting, and ultimately eliminating, instances of racial bias.

Last month’s restart of the English top division has been marked by each team “taking a knee” immediately before games, though Pogba has gone one step further – by having a fist shaved into the left side of his head.

Pogba showed off his new-look hairstyle during his team’s convincing 5-2 win against Bournemouth on Saturday, a game which saw each of the 22 players and the referee kneeling ahead of the start of the game, a gesture popularized by NFL quarterback Colin Kaepernick several years ago.

Paul Pogba showing support to #BlackLivesMatter in his own way and we can only applaud the hair cut. pic.twitter.com/b8JbYhoLAq

Despite the large-scale support from various sports governing bodies for the wave of silent protests, the concept of kneeling has yet to be universally adopted.

Sunday’s Austrian Grand Prix was marked by six drivers refusing to kneel alongside their peers prior to the start of the race, despite the most successful black driver in history, F1 world champion Lewis Hamilton, saying beforehand that people who remain silent are “complicit”.

It is clear, though, that Pogba isn’t someone who can be kept quiet in the face of what he sees as an important gesture in the fight against racial injustice. 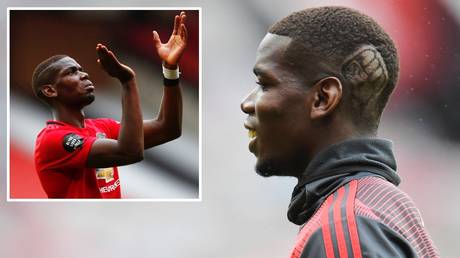 Iran to sue US in top UN court for...