A promising goalkeeper who was caught on camera playfully demonstrating his MMA skills to one of his teammates has quit football at the age of 21, switching to his preferred sport in a move club officials have called “courageous”.

Isaac Richards has hung up his goalkeeping gloves in favor of MMA ones after surprising officials at Australian top-flight side Adelaide United by requesting to be released in order to give himself a fighting chance of a future in the octagon.

Bosses at the A-League club would not have been completely unaware of Richards’ love of MMA, though, given his antics that were caught on camera during a training session last month.

Twenty-one-year-old Richards displayed rough-and-tumble ringcraft as he rolled on the grass before showing off a couple of acrobatic kicks to teammate and former Australia international Michael Marrone.

“What did you say to Isaac?” the club joked on Twitter alongside the footage, to which Marrone replied: “You can see a spar between us every morning. Sometimes I’ll even let him win.”

Announcing his new career, Richards said he “owed a lot” to United for “steering me on the right path.”

“I saw football as a great pathway to get myself out of some wrong things I was once doing in my life and it’s helped me develop as a person,” he explained.

“To me, mixed martial arts has always been my own personal form of self-expression.

A brave decision from a great young man. A good lesson to everyone that they should do what they are passionate about and follow their dreams. https://t.co/dHKNS0UBEk

“It helps me understand and deal with my emotions.

“I’m excited to be bringing myself out of my comfort zone and looking forward to dedicating my life to my true passion: mixed martial arts.”

Director of Football and former A-League winner Bruce Djite praised Richards’ abilities and bravery. “Isaac has made a very courageous decision about his future and we fully respect and support his choice,” he said.

“It’s not every day a player walks into your office and says he wants to try and make it as an MMA fighter.

“Isaac consistently impressed us as an up-and-coming goalkeeper but we would never stand in the way of a player following their passion and dreams.” 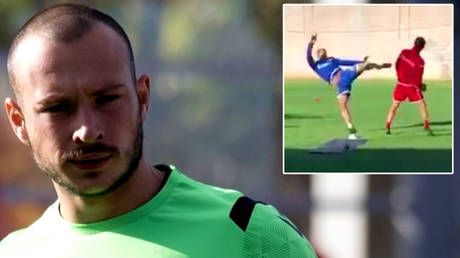