Close
Trending News
HomeSport700 for Messi: Seven of the legendary striker’s best goals for Barcelona and Argentina, from mimicking Maradona to ruining Ronaldo

After Lionel Messi celebrated 700 career goals with a Panenka penalty in Barcelona’s La Liga draw with Atletico Madrid on Tuesday night, take a look back at seven of his best strikes, including the World Cup and Champions League.

The impudent spot-kick that gave the relentless record-breaker his latest century wasn’t quite as dramatic as his 500th and 600th goals, though. Here, we take a look back at those and five more of Messi’s finest.

Despite becoming the first player to score a hat-trick in El Clasico against Real Madrid a month earlier, Messi was only occasionally being mentioned by some in the same breath as Diego Maradona by the time of this Copa del Rey semi-final against Getafe.

He did his best to narrow any distinction between the pair of legendary Argentina strikers with an uncanny emulation of Maradona’s marauding run that ended England’s resistance in the 1986 World Cup quarter-finals, becoming known as ‘The Goal of the Century’.

Even by the excitable standards of Spanish commentators, the man behind the microphone appeared to know that something was about to happen as the 19-year-old deceived an onrusher just inside his own half on the right.

Sure enough, he then skipped past a second challenge, charged through the opposition half, slipped between two defenders on the edge of the penalty area and rounded the goalkeeper to finish from an acute angle.

Thirteen years and hundreds of goals later, the white-hot brilliance of the strike is entirely undimmed – but there was an early precursor to some of the most painful moments in Messi’s career as Barca blew a 5-2 first-leg lead by losing the return 4-0 at Getafe.

Messi’s 600th goal was arguably the greatest strike from a free-kick the Champions League has ever seen, enhanced by Messi suggesting that his nail in a coffin sprung open by Liverpool in the second leg had been down to luck.

There was, admittedly, a paper-thin amount of space between Joe Gomez’s left ear and the ball as the Reds’ wall jumped to try to block an effort that curled perfectly around them and up into the right-hand corner of stunned goalkeeper Alisson’s net, but the outrageous swerve and velocity of the shot owed everything to Messi’s out-of-this-world ability.

Former England defender Rio Ferdinand said he felt “blessed” to have been in the stadium and Liverpool manager Jurgen Klopp could only bow to the architect of his side’s downfall after watching Messi score the spectacular second of his two goals in the final 15 minutes to give Barcelona a 3-0 first-leg win.

Klopp’s claim that the visitors could not have played any better sounded somewhat silly given how easy Messi had made it look, but a month later he had been proven right as Barca capitulated 4-0 in the second leg to herald the first Champions League final without Messi or Cristiano Ronaldo since 2013.

While Ronaldo is celebrated for his NBA-worthy agility, Messi’s aerial prowess is rarely regarded within the context of a career in which the vast majority of his goals have come from his lethal left foot.

That might explain why he cherishes this acrobatic cracker, bamboozling Dutch international Edwin van der Sar by meeting a deep right-wing cross from Xavi with a finish that looped over the United goalkeeper and into the far corner of the net.

On this day in 2009 Messi scored this iconic header as Barça defeated Manchester United in the Champions League Final 🐐 pic.twitter.com/2RCALd7Cyv

It’s also to do with the value of the goal, sealing Barca’s first treble under Pep Guardiola with the second in a 2-0 win over the Premier League champions.

“My favourite goals are more than just attractive; they are important,” he told Marca. “That goal rounded up a spectacular game.”

United boss Sir Alex Ferguson’s pre-final confession that he did not have a specific plan to stop Messi seemed understandable given the sorcery of the goal, but the defeated managerial great was less impressed when a reporter attempted to lure him into admitting that he would love to sign Messi by asking him which Barcelona star he would choose given a blank chequebook.

“That’s one of the most stupid questions I’ve ever heard in my life,” shot back the withering Scot, before sarcastically suggesting he would opt for Argentina destroyer Javier Mascherano.

When Messi showed a delicacy of control reminiscent of Dennis Bergkamp against Argentina 20 years earlier to put his side ahead within the first 15 minutes of their Group D decider against Nigeria, he might not have expected to be involved in one of the tensest matches of his career.

Entering the tournament in their usual role as contenders, Argentina had drawn with Iceland in their opening game and lost 3-0 to finalists Croatia in their second, leaving them relieved when Messi controlled Ever Banega’s superb long-range pass on the edge of the penalty with his thigh, kept the ball in the air and walloped a wonderful finish into the top corner with his right foot.

After Nigeria equalized six minutes into the second half, Argentina needed a goal from Manchester United defender Marcos Rojo four minutes from time to squeeze through, with an ecstatic Messi the first to congratulate the unlikely saviour.

That winner and the striker’s wonderful opener were as good as it got for Messi and his country in Russia, giving him his only goal in a tournament that ended in the next round when one of the next generation of potential great goalscorers, Kylian Mbappe, scored twice in five second-half minutes to help France advance 4-3.

This Champions League edition of El Clasico had been a typically attritional affair before Messi – then 23, and already the club’s third-highest goalscorer ever – changed the game with a neat volley 14 minutes from the end to give Barcelona an away goal against their arch-rivals.

Madrid’s nemesis then made the lead look unassailable in cruel fashion with two minutes left, sprinting past five hapless opponents before placing a calm finish beyond Spain captain Iker Casillas for his 52nd goal of the season.

Messi’s 12 goals in Europe put him four ahead of his nearest rival as he scored again in a 3-1 win over Manchester United to lift the trophy, Barca having drawn 1-1 in the second leg at home to Madrid to reach the final.

Barcelona’s total of 34 goals from six matches in the 2014/15 Copa del Rey is unsurprising considering their lineup in the final included Messi, Neymar, Luis Suarez and Andres Iniesta.

Messi only scored five of his 58 goals that season in the Spanish domestic cup competition, but one of them remains a vintage example of his dribbling ability from anywhere on the pitch and bears parallels with that goal against Getafe.

Again, there appeared to be no more danger than usual when Barcelona began a move inside their own half, with Messi lingering on the ball on the right flank following a one-two with Brazil captain Dani Alves.

From there, he surged past his marker and, with three Bilbao players swarming him, beat the same man again on his way towards the right hand edge of the penalty area.

He then cut inside another defender and smashed a low shot beyond goalkeeper Iago Herrerin at his near post to put Barcelona ahead in the 20th minute of a final they won 3-1, Neymar adding a second before Messi struck again with 14 minutes left.

If the occasion and significance of a Messi goal makes the mere sight of the ball hitting the net more special, this is a treasure.

In the second minute of stoppage time in a late-season top-of-the-table clash at Madrid, right-back Sergi Roberto produced a driving run from well inside his own half, laying much of the groundwork for a flowing build-up that would have been beautiful to watch even without its exquisite end product.

Andre Gomes collected possession just outside the hosts’ penalty area on the left and played Jordi Alba into space on the overlap, taking advantage of a man advantage after Sergio Ramos was sent off.

The left-back stalwart teed a low pass into the path of Messi, arriving just inside the penalty area slightly to the left of centre, and the striker produced the perfect finish required to beat Marc-Andre ter Stegen at his near post, sweeping a brutally precise drive into the net for the last-gasp winner and his 500th goal.

Ronaldo and his Blancos team-mates collapsed to the turf as Barca went top of the table, but Zinedine Zidane’s side recovered to seize upon their game in hand and win La Liga by three points.

Messi finished top scorer with 37 goals in the division – 12 ahead of Ronaldo and eight ahead of runner-up Luis Suarez. 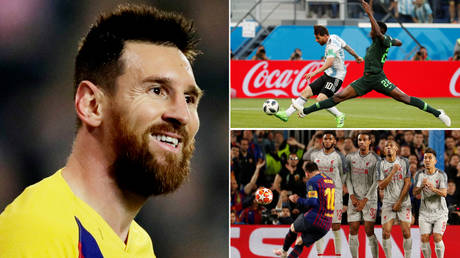 ‘I can, and I did’: F1 fans in hysterics at Brundle’s ‘trainwreck’ interview with rapper Megan Thee Stallion at Grand Prix (VIDEO)