Leicester dominated Palace throughout their Premier League clash at the King Power Stadium, but didn’t make the breakthrough until the second half, when Kelechi Iheanacho put the home side ahead on 49 minutes.

READ MORE: 700 for Messi: Seven of the legendary striker’s best goals for Barcelona and Argentina, from mimicking Maradona to ruining Ronaldo

It looked like it was going to be frustrating afternoon for Vardy, who looked nervy and off his game as he fluffed a couple of chances during the matchup as he tried to reach the 100-goal milestone.

But, after showing his frustration after missing a chance with 15 minutes to go, the England striker finally took his chance when Harvey Barnes teed him up for the simplest of tap-ins two minutes later.

The goal seemed to lift a weight off Vardy’s shoulders as his celebrations appeared to be more of relief than elation as he reached his Premier League century.

A far more relaxed Vardy then turned on the style to score a brilliant second in stoppage time as he charged half the length of the pitch before firing past Vicente Guaita to round off the 3-0 win.

As well as Vardy’s personal achievement, the match helped keep Leicester right in the hunt for a UEFA Champions League qualification spot, as they remained third in the Premier League table, eight points behind Manchester City and three points ahead of Manchester United with five games to go in the 2019-20 season. 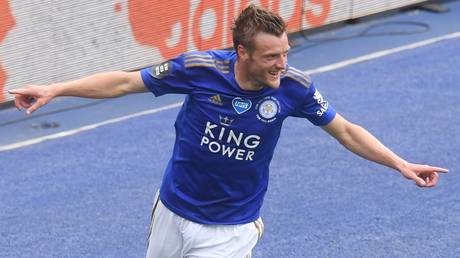