Close
Trending News
HomePoliticsWhat is a No Deal Brexit and what does it mean for the UK?

What is a No Deal Brexit and what does it mean for the UK?

What is a No Deal Brexit and what does it mean for the UK?

BRITAIN left the EU at the beginning of 2020 – more than three years after the nation narrowly voted to leave the union.

Negotiations continue, but the EU and UK still disagree over future arrangements for areas such as fisheries, state aid and financial services.

What is a No Deal Brexit?

A No Deal departure from the European Union means leaving without formal arrangements for the future relationship.

Britain’s trade, customs and immigration rules were tied up with the single market and a host of EU regulatory bodies.

Mr Johnson had insisted Britain would leave the EU on October 31 “do or die” – and was prepared to leave with no deal.

The PM said he would rather be “dead in a ditch” than ask the EU for another Brexit extension.

The Benn Act required the Government to either reach a deal – or gain Parliament’s approval for a No Deal Brexit by October 19.

The UK ended up leaving the EU on January 31 with a transition period until December 31 2020.

While we did leave with a deal – in which this transition period was agreed – there is still the possibility of ending up in a no deal scenario still.

If there is no arrangement for our future relationship by the end of this period then Britain will have left the EU with no deal and will trade on World Trade Organisation rules.

In August 2019 John Bercow fought with the government to stop it forcing through its Brexit deal by closing parliament.

At the same time several Remainer MPs and anti-Brexit lawyers were trying to stop a No-Deal.

What is the latest Boris Johnson has said about a no-deal Brexit?

Days before the Prime Minister’s July deadline – the last opportunity to extend the transition period – ministers said Britain is close to abandoning a trade deal.

Boris Johnson’s most senior aide Dominic Cummings has been pressuring the UK’s negotiators to stick to red lines as tightly as possible in order to get the best possible deal for Britain, according to EU insiders.

Deputy negotiator Oliver Lewis, who is a close ally of Mr Cummings, was identified as a key blockage in the talks.

It came after the EU’s chief negotiator Michel Barnier said he would ease his red lines provided Boris Johnson’s government showed some compromise.

But British and EU negotiators have agreed 80 percent of a deal and were gunning for a breakthrough on a post-Brexit security pact.

What happens if there is no Brexit deal?

To avoid a No Deal, the UK government must agree its future relationship with the EU – the aims of which were established in the 27-page political declaration.

A free-trade agreement is the priority and talks, which started in March, are set to intensify to achieve this.

During this transition period the UK is still a member of the single market and the customs union.

But if we leave without a deal we will not be a member of either and have nothing firmed up to replace it, which means Britain will be forced to trade according to the World Trade Organisation – the global body overseeing international trade.

This could lead to greater tariffs on imports and exports – resulting in a price hike.

Other aspects are also subject to a deal being reached, including;

What does No-Deal mean for me?

The Government has launched a new “Check, Change, Go” slogan to encourage the public to prepare for the end of the transition period in January 2021.

A questionnaire on the gov.uk website allows you to answer a few questions in order to get personalised advice on what you should do to prepare for the looming deadline.

Businesses are encouraged to start “preparing for a new approach to trade with our partners in the European Union.”

It added: “For individuals this may include registering your residency rights.” 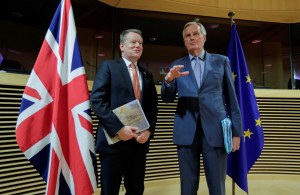 'The situation is clear'...