AN ARCANE parliamentary motion can trip up the government and force it to release documents it intended keeping behind closed doors.

Here’s more on the ‘humble’ address, an ancient and rarely used parliamentary procedure.

A humble address is a direct call from the House of Commons to the Sovereign, in this case the Queen, to ask the government to produce documents.

The Opposition sometimes tables a motion in the form of a humble address on Opposition days.

A humble address is a message to the Queen.

It’s used, among other things to call for papers from departments headed by a Secretary of State.

This address can be debated, amended and voted on like any other motion.

Humble addresses, if agreed, are understood to be binding on the House.

According to Parliamentary Practice, a rulebook published in the 19th Century, the humble address is more binding than a simple opposition motion.

That is because it is an appeal to the head of state, rather than to the government who could otherwise choose to ignore it.

Former Speaker of the House John Bercow said such motions were “traditionally regarded as binding or effective”.

It has rarely been used in the past 200 years.

You’ll also hear the term “An Humble Address” after the Queen’s Speech.

After the state opening, the Government’s legislative programme – as outlined in the Queen’s Speech – is debated by both Houses.

The Debate on the Address is the first debate of the new parliamentary session and normally lasts for five to six days.

The motion is phrased as: “An Humble Address” to Her Majesty thanking her for her gracious speech.

The job of moving the motion is regarded as an honour and is given to two government backbenchers.

They are normally a contrasting pair with very different constituencies – one a relative newcomer and the other a long-serving Member.

By convention, their speeches are not contentious and contain both humour and flattering references to their constituencies.

When was the humble address introduced?

The term “humble address” has been around for centuries, as pages from books printed in the 1600s show.

It was used repeatedly, for example, during the first parliament of George I, in March 1715.

Records show that “an humble Address be presented to his Majesty… for communicating to his Parliament, the advices he has received of an attempt preparing to be made upon the nation from abroad, abetted and encouraged by treasonable practices at home, in favour of a Popish Pretender”.

General Stanhope, Secretary of State, advised parliament that “an humble address be presented to his Majesty… for his gracious message this day, and for his tender regard to the privileges of this house”.

Robert Walpole spoke out “in case of an invasion”, more money was needed for the troops, so “an humble Address” was “presented to his Majesty to allow full pay to half-pay officers”.

How did Labour use the humble address to call for the publication of Brexit files?

Labour defeated the government over the publication of 58 studies into the economic impact of Brexit.

The studies had been commissioned for ministers who had fiercely opposed them being made public — leading opponents to believe they may contain information embarrassing to the government.

Labour’s Sir Keir Starmer, the then Shadow Brexit Secretary, tabled a “humble address” to call for the documents to be handed over to the Brexit Committee of MPs for scrutiny. They were to then decide which to make public.

The humble address was passed unanimously as the Tories sensed defeat and so called on its MPs not to attend the vote to save face.

Starmer said he expected ministers to release the studies as a result.

“Labour has been absolutely clear since the referendum that ministers could not withhold vital information from parliament about the impact of Brexit on jobs and the economy,” he said.

On November 13, 2018, the Labour Party used an Opposition Day debate to ask the Government to publish any legal advice that they have received on Brexit.

The Opposition used the humble address mechanism, which is seen as binding. The motion was passed without a division.

In an urgent question on November 29, 2018, Labour accused the Government of withholding information after it announced that it would publish a “full, reasoned, position statement” but not the full legal advice on Brexit that it had received.

Then Brexit Secretary Stephen Barclay confirmed that a, “document, setting out the Government’s legal position on the proposed Withdrawal Agreement, is expected to be published on Monday 3 December”.

Politics Home explains: “Following Labour’s use of a ‘humble address’ on November 13 to try to force the government to publish Attorney General Geoffrey Cox’s legal advice, MPs vote to find the government in contempt of Parliament.

“Parliament then passes an amendment by Dominic Grieve forcing the government to set out a plan within 21 days if May cannot get her deal passed.”


What is a humble address?

PORT IN A STORM 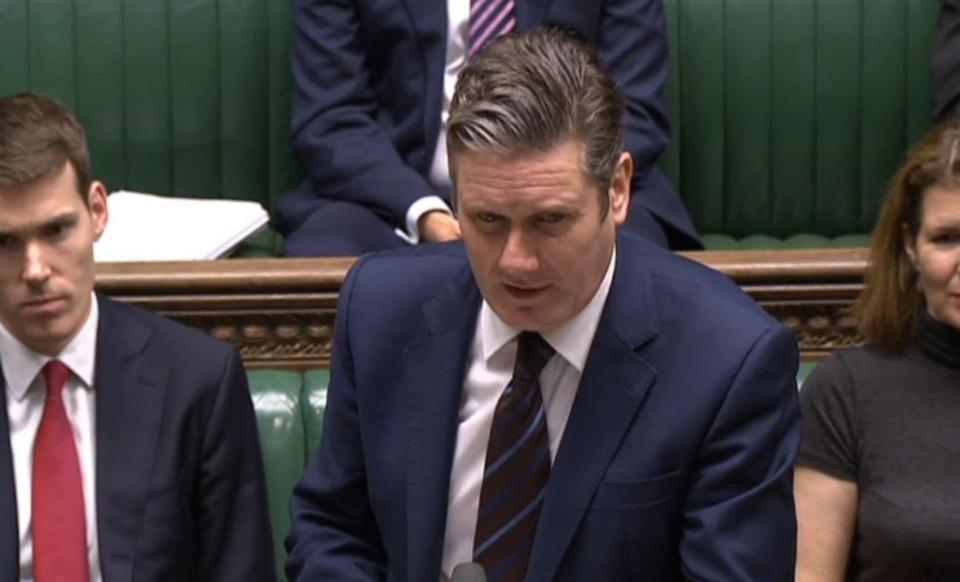