EASTER Monday has been pencilled in for the lifting of strict Covid tiers, The Sun can reveal.

Boris Johnson hopes coronavirus cases will have tailed off by April 5.

The news dashes hopes that new vaccines will lead to a swifter end to the crisis — and it will further enrage Tory MPs already threatening mutiny when tough measures are voted on next week.

It will also reignite calls for more financial support for crippled pubs and restaurants.

But the PM is determined to put the NHS first — and believes he will have to wait until after Covid’s winter peak in February and March to ease his grip.

A senior government source told The Sun: “Boris will not countenance hospitals overflowing like they did in Italy.

“Nor can we get to the stage where we have to cancel operations and treatments. In all likelihood, the tiers have to stay.”

Yesterday, Mr Johnson tried to reassure people their areas could be moved into lower tiers if and when infection rates fall. 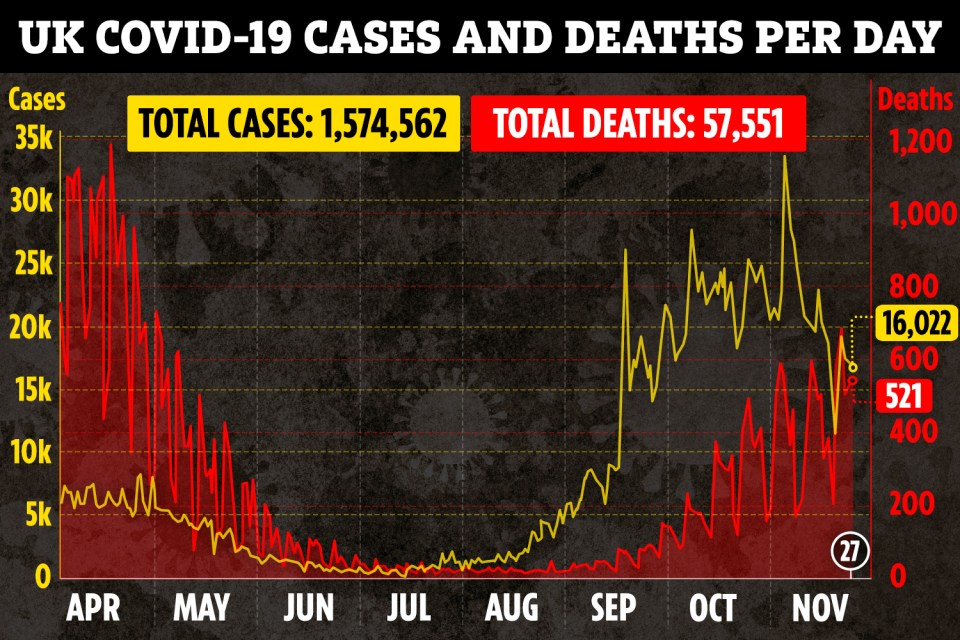 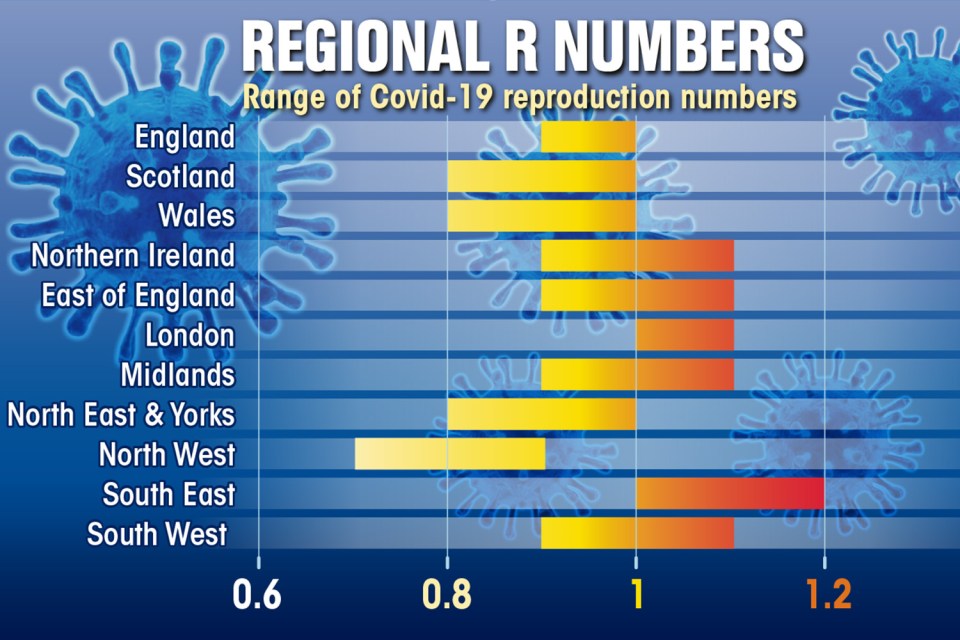 Seeing how Covid testing is going on in Porton Down, Wiltshire, he said: “I know it is frustrating for people when they are in a high-tier area when there is very little incidence in their village or their area.

“There really is the prospect of areas being able to move down the tiering scale.”

A government source added that “as a vaccine is rolled out and testing is ramped up, more and more areas will come down in their tiers”.

New data shows the key “R” rate has dropped below 1 for the first time since August.

Science advisers Sage estimate it is now between 0.9 and 1 across the UK — meaning infections are on the wane.

But Whitehall insiders reckon it is inevitable it will tick up again over Christmas as families make the most of seeing friends and relatives in their festive bubbles.

That in turn could see much of England in the strictest Tier 3 lockdown in the New Year — while it is very unlikely any areas will go into Tier 1 over the same period.

Some scientists even believe rates could rocket so quickly that another national lockdown will be needed in January.

The gloomy warnings are set to spark fresh uproar among some Conservative MPs.

Up to 70 are threatening to rebel and vote against the latest measures in Parliament.

That would leave Mr Johnson humiliated and forced to rely on Labour backing to get his tiers plan through the Commons.

Last night, one seething Tory told The Sun that Mr Johnson could be heading for the biggest rebellion of his premiership — and that even more trouble could loom.

The PM visited Porton Down, Wiltshire, to see how Covid testing is going[/caption]

Mr Johnson is determined to put the NHS first[/caption]

Another said: “If it is a big rebellion then Boris is in trouble.

“It is a bit like having affairs — once you have voted against the Government once, it is easier to carry on doing it.”

They are furious that ministers have ordered entire regions into tiers together, lumping Covid-free villages in with hotspots just because they fall under the same council.

The MPs are begging No10 to adopt a more local approach to stop businesses being unfairly crippled by the harsh measures.

Sir Graham Brady, head of the 1922 Committee of backbench Tories, said he is ready to vote against planned action.

The MP, whose constituency in Greater Manchester has spent eight months in various lockdowns, said people are “livid”.

He added: “There has been a huge amount of pain for businesses and jobs.

“People went along with a second national lockdown. But they thought there was a contract there — that by accepting that additional pain and sacrifice, they would come out into something much better. That hasn’t happened.”

Former Tory Cabinet minister Damian Green said the public will refuse to stick to the new rules if they think they are a sham.

He added: “My real fear is that if people think these rules have been applied unfairly in their area then there is a big chance they will start to disobey them.

“In Kent, we have a town called Tenterden which has a Covid rate of pretty much zero.

“There have been weeks when there has been literally nothing there. Yet all of Kent is in Tier 3.”

He went on: “There is a lot of anger. My email inbox has not been this full since the Dominic Cummings lockdown row.”

Some Tories say that health bosses have been trying to spook them into backing next Tuesday’s vote by bombarding them with “ghoulish” charts showing Covid hospitalisation rates remaining stubbornly high.

On Monday, Tory MPs in Kent will meet with Health Secretary Matt Hancock to demand he change the way England is being carved up.

And Tan Dhesi, Labour MP for Slough — the only part of Berkshire to be placed in Tier 3 — warned that locals will just end up travelling to other parts of the county to have a pint.

He added: “That’s not good for transmission rates in those neighbouring authorities.”

One MP has claimed Health Minister Nadine Dories had admitted that local Public Health directors were not consulted on the new beefed-up tier system.

They said: “That has angered a lot of MPs from a wide range of diverse constituencies.” 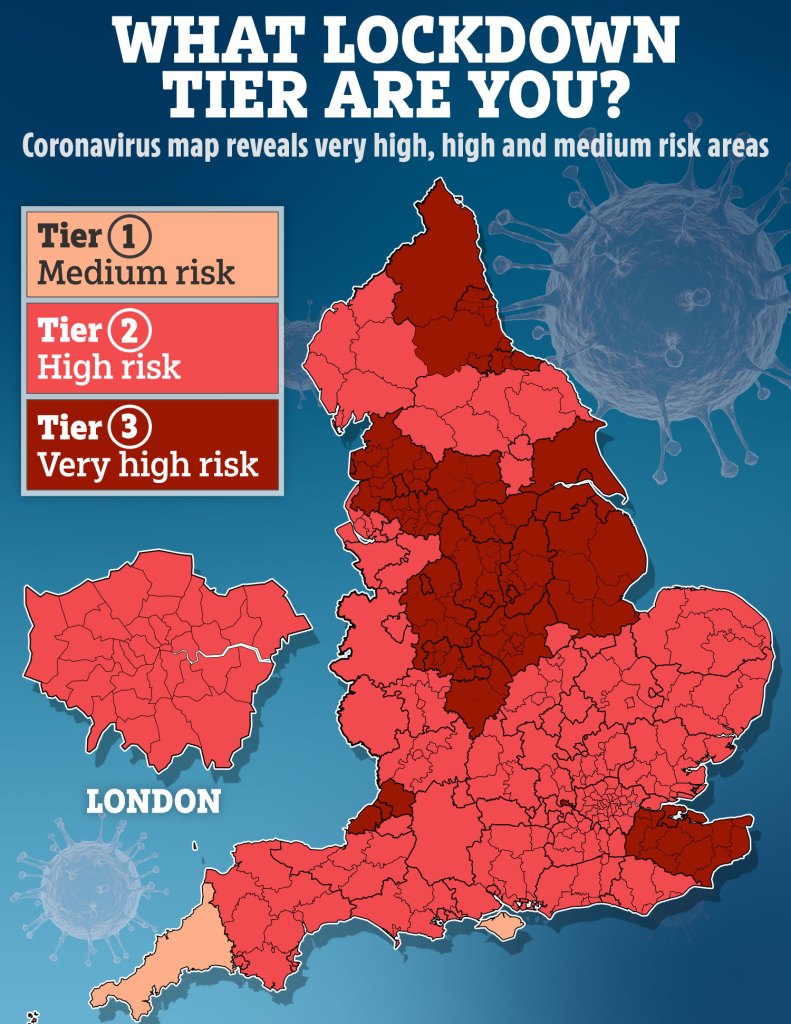