SWITZERLAND, Jamaica and the Czech Republic have tonight added to the UK’s quarantine list – dashing hopes for thousands of boozy stag-do getaways.

The Government has told travellers coming back from there after 4am on Saturday that they will need to isolate for 14 days.

The three countries were all in the dangerous ‘red zone’ where their cases per 100,000 has gone up above 20 in the last seven days.

Grant Shapps said tonight the decision is based on data on the number of infections, but also how quickly things were changing.

He warned the country that they should not be travelling at all unless they are prepared to stay home when they return.

The Transport Secretary said: “As with all air bridge countries, please be aware that things can (and do sometimes) change quickly. Only travel if you are content to unexpectedly 14-day quarantine on return.”

And he stressed it was illegal to ignore the quarantine rules – warning people could face hefty £1000 fines for disobeying.

Mr Shapps said: “Quarantining on return from a non-Travel Corridor country is a legal requirement and you commit a criminal offence if you break that quarantine. Fines, as well as a criminal record can result.”

The news is a disappointment to cheese and chocolate-lovers hoping for a Swiss holiday in the coming weeks.

And anyone with a boozy break to Prague coming back will have to isolate for 14 days when they come home too.

But people will now be able to safely jet off to Cuba knowing they won’t need to isolate when they return.

Patrick Ikhena, head of travel insurance at comparethemarket.com, said travellers should check with the Foreign Office and their insurance provider before deciding on their next steps.

He said: “Cover varies by provider, so always check with your insurer before travelling to ascertain the exact level of protection.

“As more countries are added to the “high risk” list, and with infection rates fluctuating daily, potential holidaymakers must continue to monitor restrictions and FCO advice closely.”

Paul Charles, CEO of the travel consultancy, The PC Agency told The Sun it was sad news the list of quarantine countries continues to grow. but stressed that a comprehensive testing regime would go some way to help solve that and encourage people to fly again. 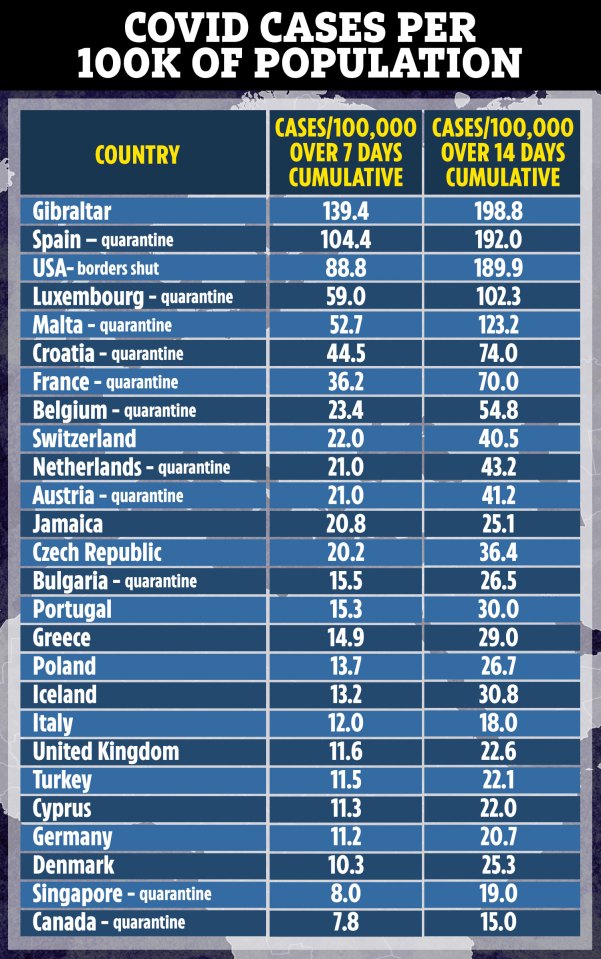 The news comes after Gatwick airport announced it was planning to cut 600 jobs, around a quarter of its workforce, due to the coronavirus crisis.

“How many jobs have to go in the travel and hospitality sector before the Government says they will introduce proper testing?” Mr Charles said.

It comes after reports that the Government have begun early talks on a possible air corridor between London and New York – as ministers continue to look at whether regional bridges may work.

Mr Charles claims the Americans are pushing hard for a “proper testing routine to open up the corridors” as their Government doesn’t want citizens to have to face a 14-day quarantine.

Ministers have been examining testing at airports for weeks but have made no announcements on whether they will follow dozens of other countries and do it here.

Sources claimed it was due to the cautious nature of Matt Hancock and Boris Johnson, who don’t want to encourage the nation to travel and risk importing more cases back into the UK.

Mr Hancock has stressed this week that it’s still on the cards, but no firm decisions have been made.