BORIS Johnson is slowly winning public support for his struggle to get Britain back to work, a poll reveals today.

Seven out of ten people now believe workers must return to the office soon to avoid a devastating economic crash.

Many are still deeply afraid of catching the virus and will continue to avoid shopping or eating out in restaurants.

But the PM’s call for normal life to resume is starting to hit home, the exclusive Sun on Sunday survey shows.

Fear of catching coronavirus is still the biggest single concern for 57 cent of the population. But most accept we have to leave our homes and get back to the workplace to save the economy.

About one in five — 18 per cent — think it is unsafe to return to work and want to continue working from home. A similar number, 17 per cent, argue it is probably safe to go back.

But crucially, a massive 54 per cent accept it is worth the risk of travelling back to their office to protect their jobs and livelihood. 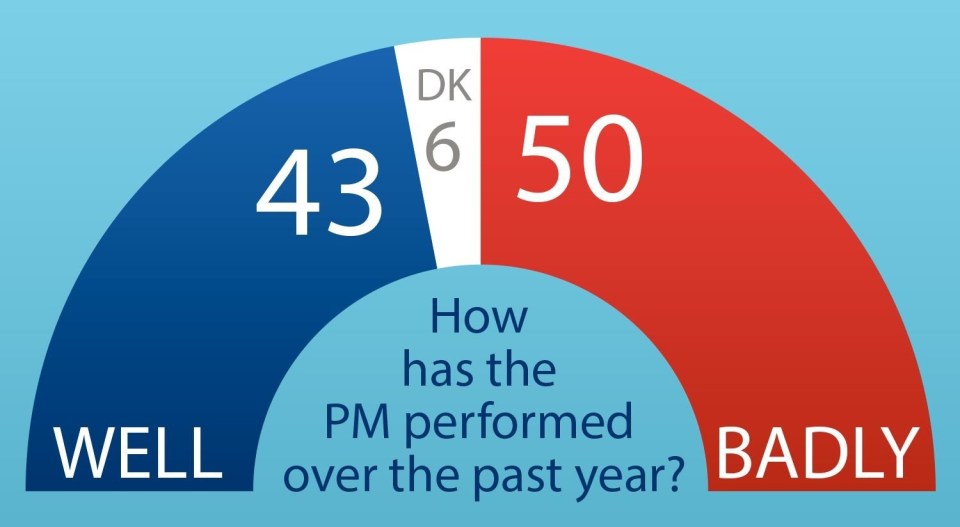 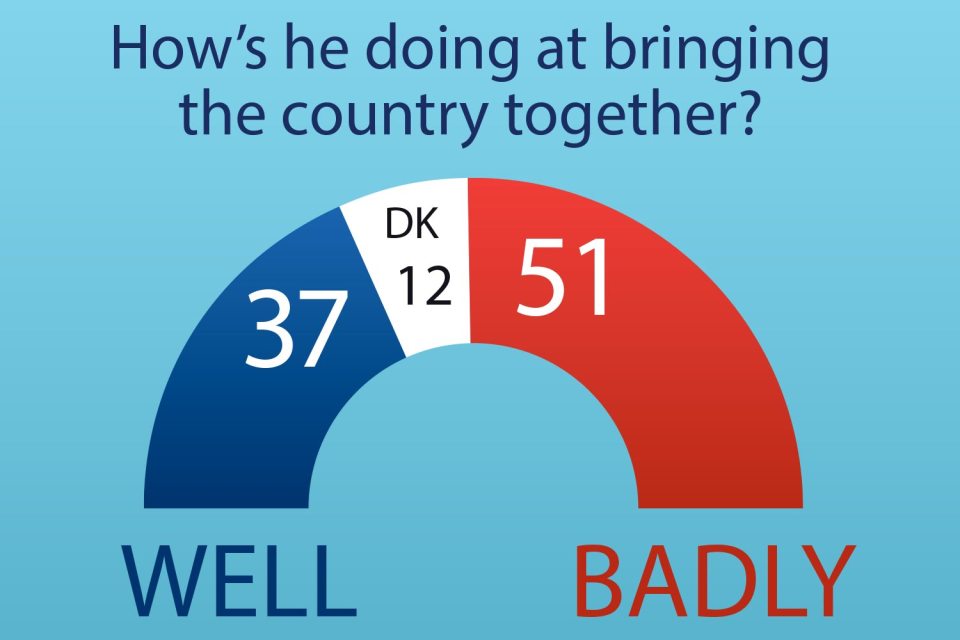 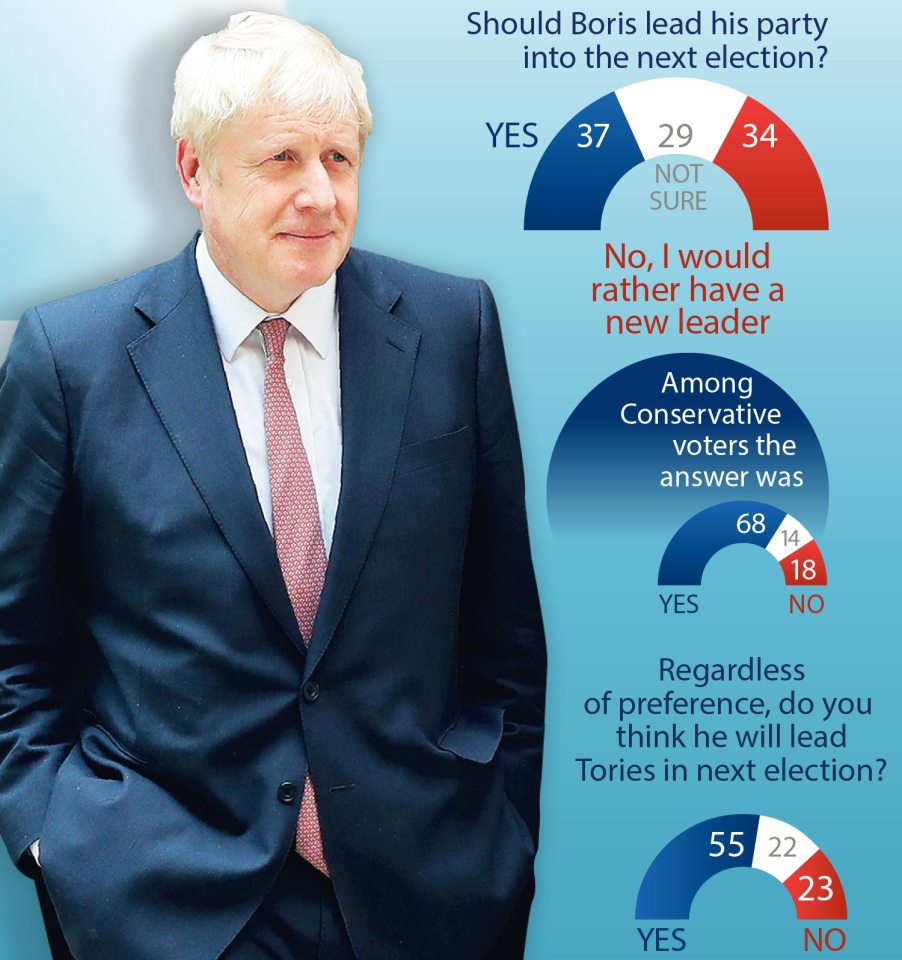 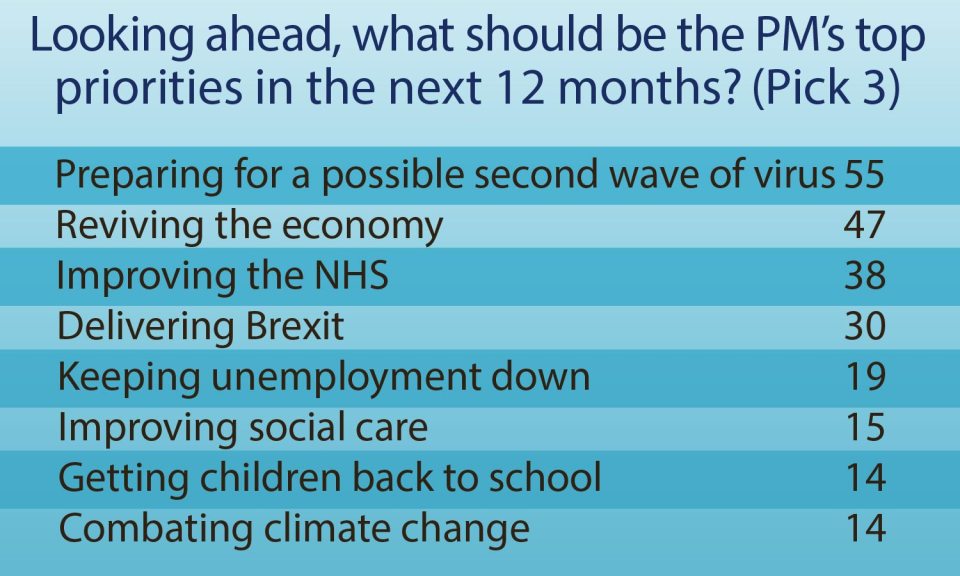 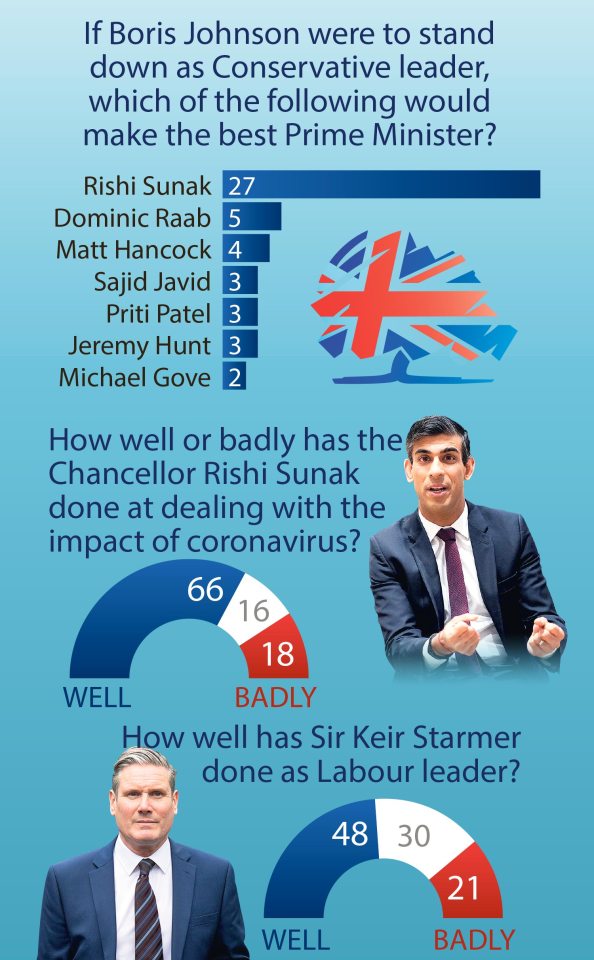 The boost for BoJo’s attempt to reawaken our towns and cities comes in our YouGov poll to mark the first anniversary of his Premiership.

Tory ex-minister Sir Mike Penning said: “This poll shows that the penny is beginning to drop about the wider impact of coronavirus.

“It’s understandable that people are still concerned about becoming infected, but as we come out of lockdown many are starting to contemplate the economic backlash that is about to hit us.

“If we want to keep people in work and protect our vibrant towns and cities, we’ve got to go back to work and get the country moving again.”

However, most people think a second wave of coronavirus infections is inevitable, with eight out of ten predicting a sharp rise this autumn.

And some MPs fear the Government’s success in persuading Brits to stay at home has made the task of getting them to go back to work even tougher.

If we want to keep people in work and protect our vibrant towns and cities, we’ve got to go back to work and get the country moving again.

Half of adults say they will not visit a restaurant next month to take advantage of the Chancellor’s half-price meal deal. And one in four admits that even now they still try to avoid going out shopping.

The nation is split over the safety of it, with nearly half saying they will try to avoid going to the shops with or without face coverings.

Elsewhere, there is also huge support for students to get a refund on their university tuition fees if they have missed lectures or been taught mostly online during lockdown.

Nearly half of people — 48 per cent — think they should get some or all of their money back, compared with 31 per cent who think not.

Tory MP Esther McVey has been campaigning on behalf of students who feel let down. 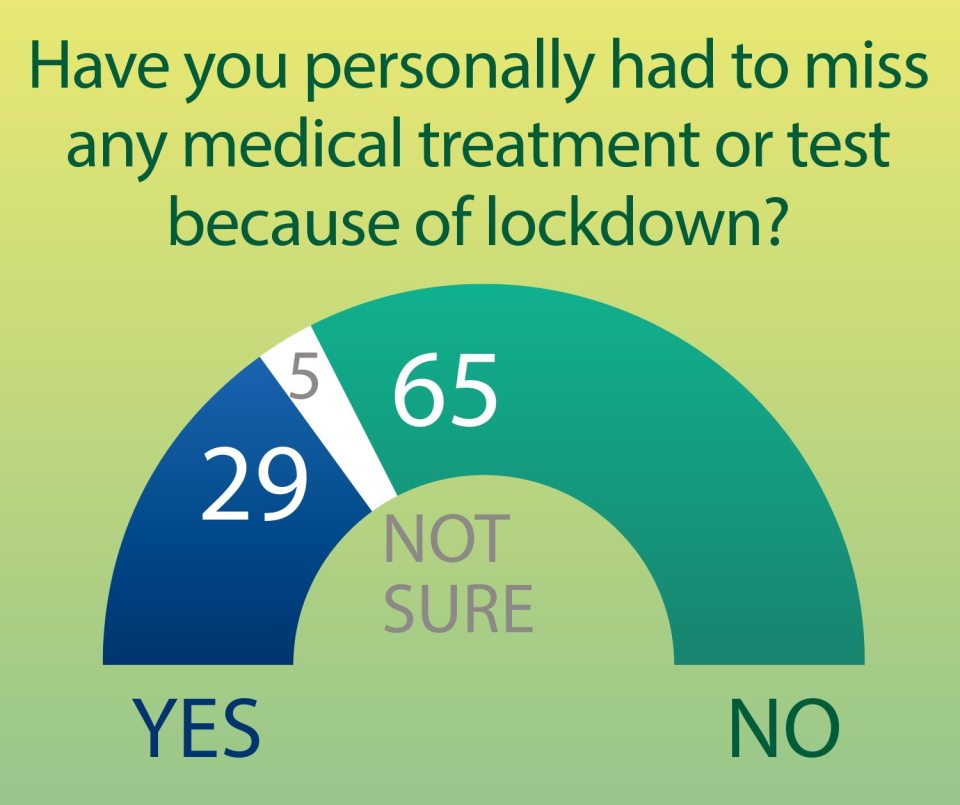 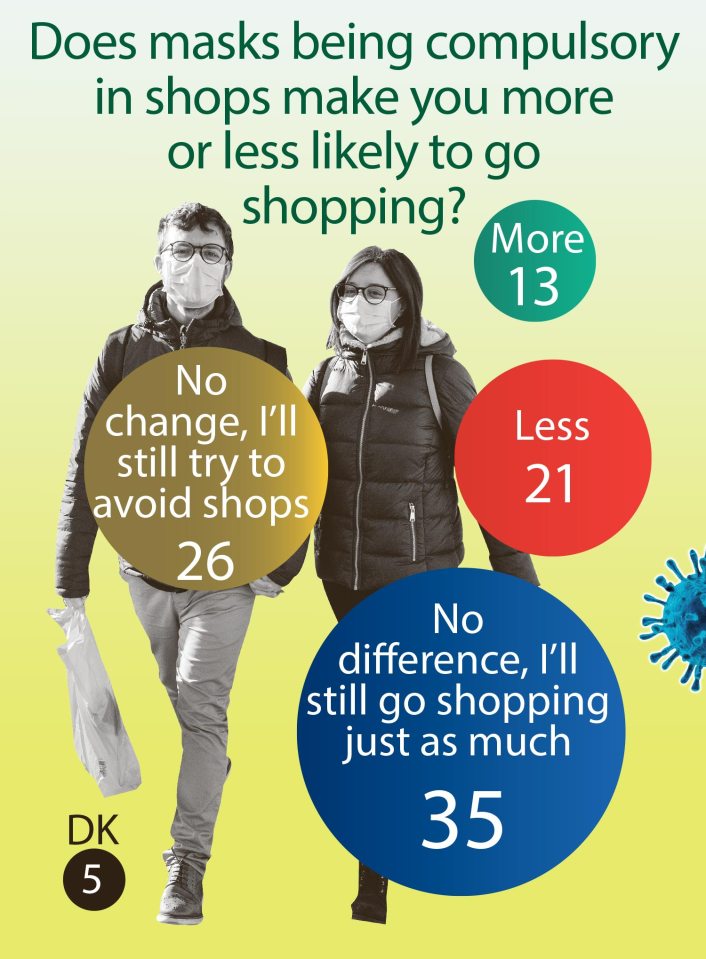 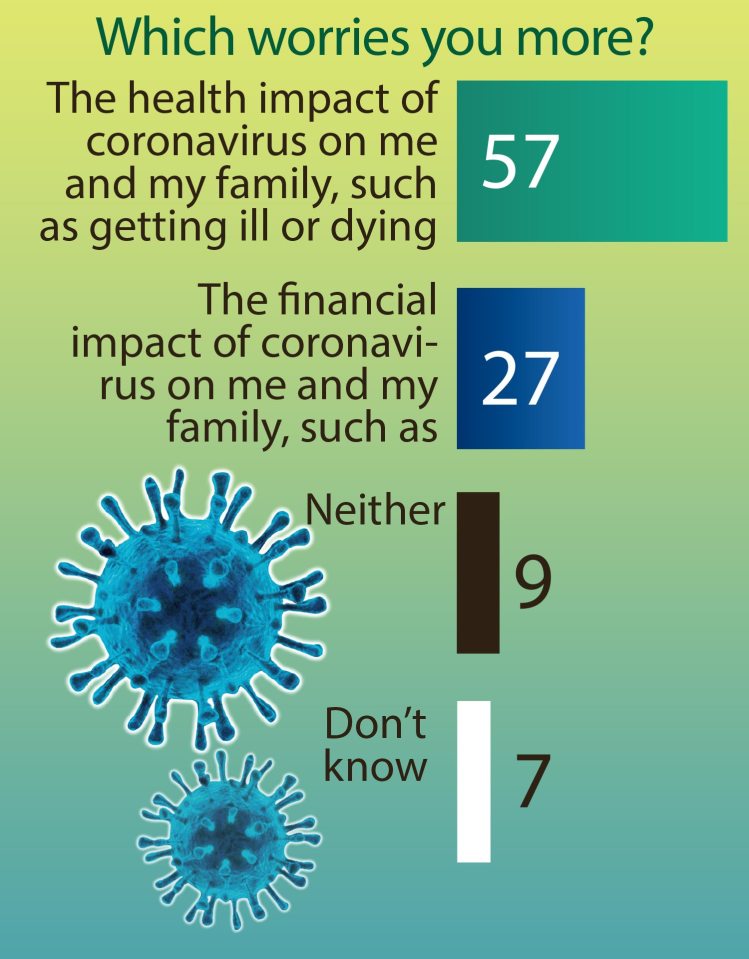 She said: “Where universities have not been able to provide a full teaching experience for students then, of course, they should offer partial refunds. I hope this poll will help to ensure students get the refunds they deserve.”

Meanwhile, a growing number fear the long-term impact an extended lockdown will have on their family’s future prospects and long-term health.

While most still worry about catching the virus, 27 per cent now say they are more anxious about the financial consequences that may follow.

Alarmingly, three in ten people reveal they have missed medical treatment or diagnostic tests during the 16-week lockdown.

Our poll also reveals that the PM’s personal rating has taken a battering as he fights on two fronts to control the spread of the virus and save jobs.

He is five points ahead of Labour boss Sir Keir when it comes to who is most trusted with the nation’s finances.

But the PM is marked down for his handling of the pandemic, his efforts to bring the country together and, surprisingly, Brexit.

More than half the population think preparing for a second wave of coronavirus should be the PM’s top priority in the year ahead.

Conservative MP Bob Seely said: “The Prime Minister has done pretty well considering these are incredibly trying and difficult times. To lead a nation when you have nearly died yourself is an astonishing achievement in itself.

“It’s been tough, but give him credit. He has bounced back and I think Britain will bounce back, too.”

Most people think BoJo should lead his party into the next general election, with 68 per cent of Tories still believing he is the best bet.

But Mr Sunak’s star is rising fast, after only five months in the Cabinet. An overwhelming 66 per cent of people believe he has done a good job of handling the impact of the pandemic with his furlough and business support schemes.

And he is leading the race to succeed Boris by a country mile with 27 per cent of voters saying he would be their first choice — 22 points ahead of his nearest rival Dominic Raab.

Mr Sunak is even more popular among Tory voters, with 35 per cent saying he would make the best PM out of all potential runners.

While Mr Johnson marks his first anniversary on Friday, millionaire Sir Keir has just chalked up his first 100 days as Labour chief. 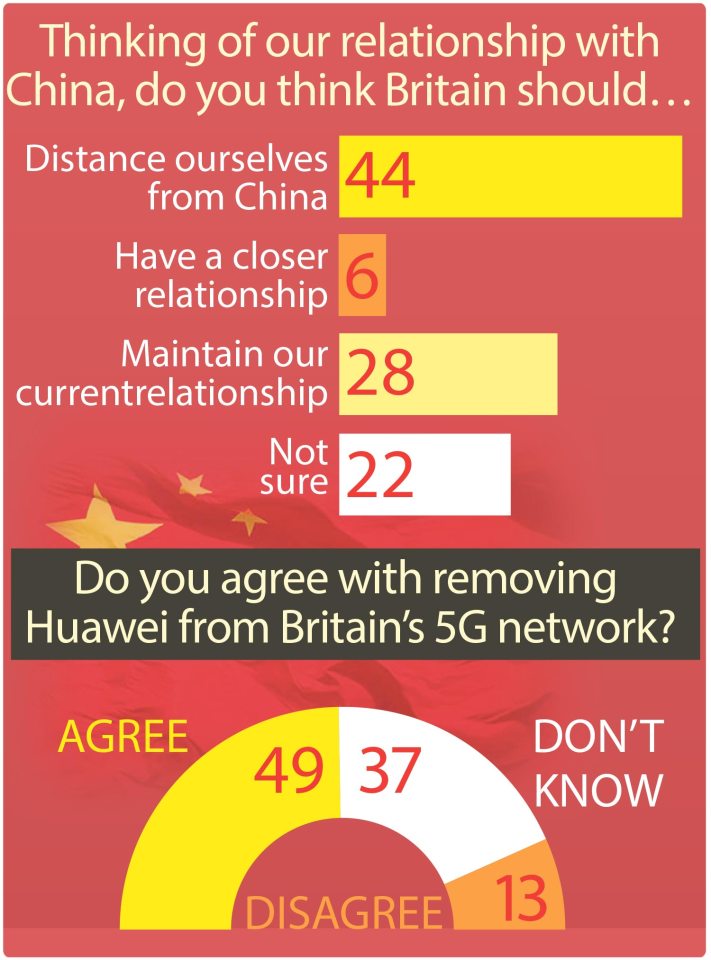 Most people think he has done well, shown himself to be a strong leader and looks like a potential PM.

But they are almost equally split when asked if he is either interesting or boring — or if he has been clear about what he stands for.

The YouGov poll of 1,631 adults also found widespread support for the Government’s decision to remove Huawei from Britain’s 5G network, with 49 per cent in favour.