Sales assistants, taxi drivers and even chefs at higher risk of death from coronavirus

Sales assistants, taxi drivers and even chefs at higher risk of death from coronavirus

SALES assistants, taxi drivers and even chefs are at a higher risk of dying from coronavirus, new figures have revealed.

The Office for National Statistics (ONS) have crunched the numbers on the riskiest jobs as businesses reopen and more people head back to work.

Sales assistants are at high risk of dying of coronavirus[/caption]

A taxi driver has a mask and a screen between him and passengers.[/caption]

Men are much more likely to die of coronavirus than women, and men in particular jobs are at an even higher risk, according to the figures.

According to the ONS, the risk of men dying from the virus was double the chance of women dying.

There were 17 specific occupations the ONS found to have raised the rates of death for men.

Overall there have been 473 deaths of male transport drivers.

Chefs, many of whom work in close proximity to other people in tightly packed kitchens, were also at a higher risk of dying from the virus, with 49 deaths so far or 56.8 deaths per 100,000.

One private hire driver Darren Hiles spent the start of lockdown working in Merseyside – he wound up spending six weeks in intensive care and four on a ventilator.

The 48-year-old told the BBC: “I wasn’t given a mask, but everything was a bit unknown at that time.

His partner, Heidi Neilson, was warned on several occasions he could die.

She said: “I couldn’t believe what the virus had done to him. He looked like a corpse. I barely recognised him.”

“Our kids wanted to see their dad and I had to wave them away because I didn’t want them to see him like that.”

Darren survived the ordeal but is still recovering and it could be a year before he can walk again.

“We were in lockdown when I was infected. The only interaction I had I was at home or at work.” 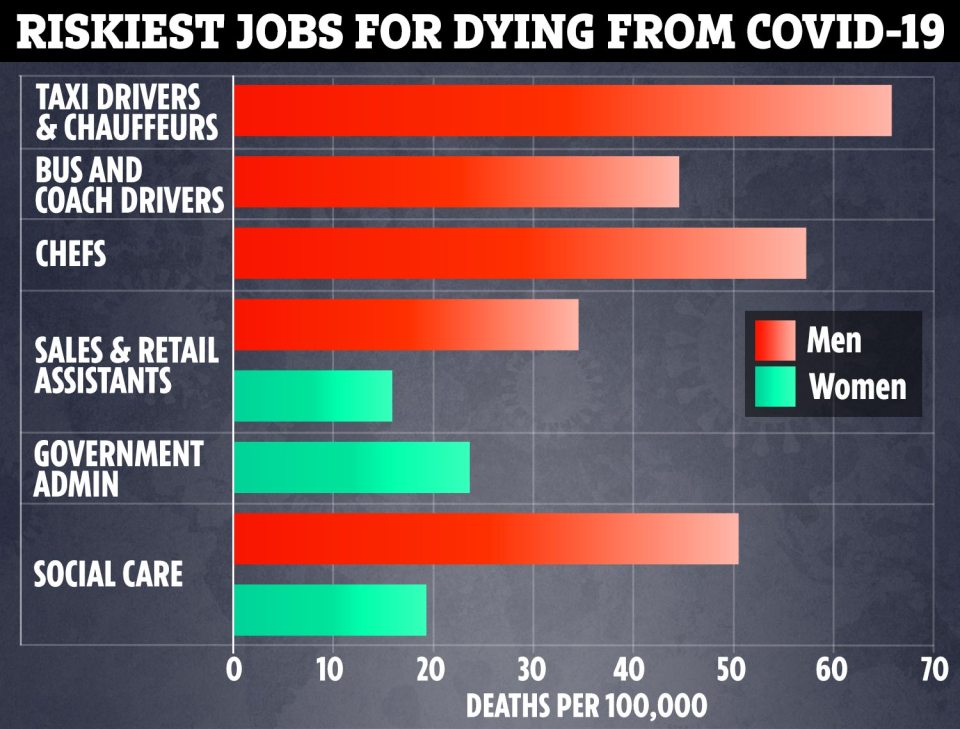 Heidi, who works in a care home and is given protective equipment, said drivers should also be given PPE.

She said: “What makes me more deserving then a taxi driver who is also doing an important job?

“The supply should be there for any frontline worker. It’s not just about the driver, it’s about customer safety.”

Sales and retail assistants were also on the list of high-risk occupations, as most non-essential retail began to reopen, with 43 deaths so far or 34.2 deaths per 100,000.

Men working in social care have more than double the risk of death from Covid-19 as those in the general population, while women have twice the risk, new figures show.

Both men and women working in social care, the NHS and in occupations such as cleaning, construction work and security, were also more likely to die with coronavirus.

The data found that men working in elementary occupations (such as construction workers, security guards and cleaners) had some of the highest rates of death involving Covid-19, with 39.7 deaths per 100,000 men.

171 women have died working in social care so far, compared to 97 male social care workers, because it is a hugely female-dominated work force.

Coronavirus has wreaked havoc in Britain’s care homes with at least a third having outbreaks of the deadly virus.

Head of Health Analysis and Life Events at the ONS Ben Humberstone said wherever there was occupations where people worked closely to others, the risk of dying from Covid-19 was greater.

He said: “Jobs involving close proximity with others, and those where there is regular exposure to disease, have some of the highest rates of death from COVID-19.

But he warned risks of dying of coronavirus can be influenced by a range of factors including someones’ job, but also age, ethnicity and underlying health conditions.

He added: “We also know that people living in the most deprived local areas, and those living in urban areas such as London, have been found to have the highest rates of death involving COVID-19.