SADIQ Khan has been reelected as London Mayor after beating out his rival Shaun Bailey.

It comes after an overnight scare for the Labour incumbent when the race for City Hall proved much tighter than expected.

Read our Elections 2021 live blog for the very latest updates

Shaun Bailey won 44.8 per cent of the vote[/caption] 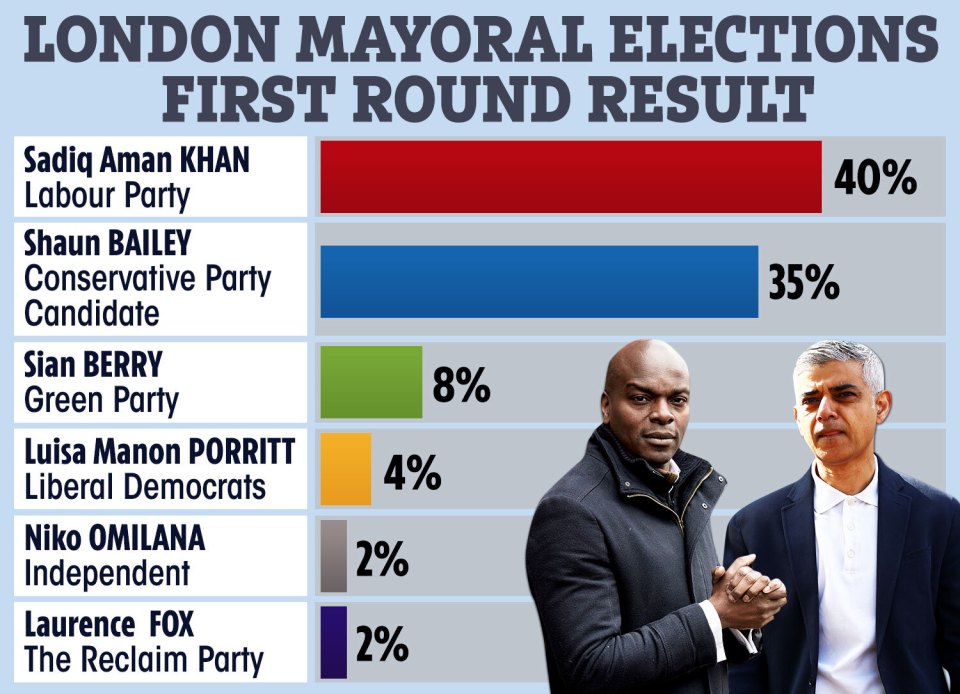 By 4pm Khan had taken 40 per cent all counted votes at 4pm, pulling away from his Tory rival Shaun Bailey on 35 per cent.

Some pre-election polls projectED Mr Khan to cruise to a first round victory – but Bailey has done far better than his party did in 2016.

The result will be a glimmer of hope to the Labour Party after it received a drubbing in local elections in England, losing control of a host of councils and a humiliating defeat in the Hartlepool by-election.

Sadiq Khan pledged to build a “better and brighter future” for the capital following the coronavirus pandemic in his victory speech from City Hall after being re-elected London mayor.

“I want to say thank you from the bottom of my heart,” he said.

“I am deeply humbled by the trust Londoners have placed in me to continue leading the greatest city on earth.

“I promise to strain every sinew, help build a better and brighter future for London, after the dark days of the pandemic and to create a greener, fairer and safer city for all Londoners, to get the opportunities they need to fulfil their potential.

“I am proud to have won an overwhelming mandate today.”

He went on to call for a “moment of national recovery to heal” following “divisions” such as Brexit, after he was re-elected as London’s mayor.

“The results of the elections around the UK show that our country – and even our city – remain deeply divided,” he said during a City Hall speech.

“The scars of Brexit are yet to heal, a crude culture war is pushing us further apart, there’s a growing gap between our cities and towns.

“And economic inequality is getting worse – both within London and between different parts of our country.

“So as we now seek to confront the enormity of the challenge ahead and as we endeavour to rebuild from this pandemic, we simply must use this moment of national recovery to heal these damaging divisions.”

Despite the win, Khan still has a fight on his hands.

He has pledged to concentrate on creating jobs and supporting businesses affected by the pandemic, saying he will be “banging the drum for investment”.

He has pledged to create a £32m Good Work Fund to create new jobs and skill centres for Londoners as part of a £544m package of support.

A YouGov poll found only 30 per cent of Londoners were satisfied with his leadership, and 33 per cent dissatisfied.

While widely praised for showing the capital as open and inclusive, his leadership has been marred by a perceived inability to tackle big issues such as transport infrastructure and knife crime.

Meanwhile, No 10 was monitoring Scottish election results amid fears an SNP majority will lead to demands for a new independence vote.

“What the people of this country want to see is politicians of all kinds — in Scotland, Wales, Northern Ireland, across the whole of the UK — working together to bounce back strongly from the pandemic.”