PRITI Patel has warned of more “lone wolf” attacks – and praised those who “ran towards danger” to save the victims of the Reading attack.

The Home Secretary said some of the police who dived in to stop more people being injured were student officers who were “courageous beyond their years”.

A mourner stands to remember the victim[/caption]

Members of the public came out to pay respects[/caption]

The Home Secretary told the House of Commons this afternoon: “We have all to often seen the results of poisonous extremist ideology.

“The terrorist threat we face is complex, diverse and rapidly changing – it is clear the threat posed by lone actors is growing.”

Three people have died and several others were seriously injured after a man attacked members of the public enjoying the sun in a park on Saturday evening.

She vowed to make sure the UK’s counter-terrorism efforts would leave terrorists with “no place to hide.”

The Home Secretary paid tribute to the courage of the young police officers who intervened: “These officers, a few of whom were student officers who ran towards danger to help those in need without a second thought.

“A young unarmed police officer took down the suspect without hesitation.

“These officers are heroes that showed courage and bravery and seflessness way beyond their years – they are the very best of us.”

Ms Patel visited the scene in Reading earlier this morning, and laid flowers at Forbury Gardens.

The PM also took part in the minute’s silence at No10 with his staff.

Ms Patel said earlier: “This is a tragic, tragic event, it really is. We have seen three people die.

“There is extensive work taking place, yes with the police, with counter terror police, the intelligence community, and all aspects of policing.
we have got a lot of information to gather.

“We have to look at all aspects of what happened on Saturday to make sure justice is served, but also we make sure we learn the lessons from over the weekend to stop something like this from ever happening again.”

Yesterday the PM vowed to learn lessons of the attack – and change the law if needed.

And the PM’s spokesperson added today: “The Prime Minister has said that if there are any lessons to be learned, or if there are any changes that need to be made to stop such events from happening again, we will not hesitate to act to take that action as we have before.”

Emotional mourners lay flowers for those killed over the weekend[/caption]

The incident was classified as terror related at the weekend[/caption]

Libyan asylum seeker Khairi Saadallah, continues to be questioned by police after being arrested on Saturday evening.

Today an American man has today been named as the second person killed in the senseless attack.

Joe Ritchie-Bennett, 39, was remembered as a “brilliant and loving” man as his dad blasted his “senseless” killing after the carnage unfolded on Saturday evening.

It is understood he was friends with James Furlong, the first victim to be named from the terror attack.

Joe’s father, Robert Ritchie, told Eyewitness News: “The family is heartbroken they have lost their brilliant and loving son. This was senseless.”

The 36-year-old was remembered as a ‘beautiful, intelligent, honest and fun’ man[/caption]

It comes after tributes poured in for Mr Furlong, an inspirational teacher.

His parents Gary and Janet, have released the following statement: “James was a wonderful man. He was beautiful, intelligent, honest and fun.

“He was the best son, brother, uncle and partner you could wish for. We are thankful for the memories he gave us all.

“We will never forget him and he will live in our hearts forever.”

Survivors and witnesses described the carnage at Forbury Gardens on Saturday evening as suspect Khairi Saadallah allegedly lashed out at groups in the sun.

The suspect is believed to have dropped his knife before fleeing from the park. A policeman then rugby-tackled him to the ground after a chase.

Questions have now surfaced after it was revealed the terror suspect was on MI5’s radar had left prison just 16 days ago.


All pubs, cafes and restaurants to be allowed to serve drinks outdoors

Suspect Khairi Saad­allah was a ticking timebomb who wanted to travel to Syria to fight, The Sun revealed.

The Libyan asylum seeker, 25, was also on medication for post traumatic stress and a suspected personality disorder before his release from prison 16 days ago.

And in 2018 he was granted leave to remain in the UK for five years despite convictions for violence. 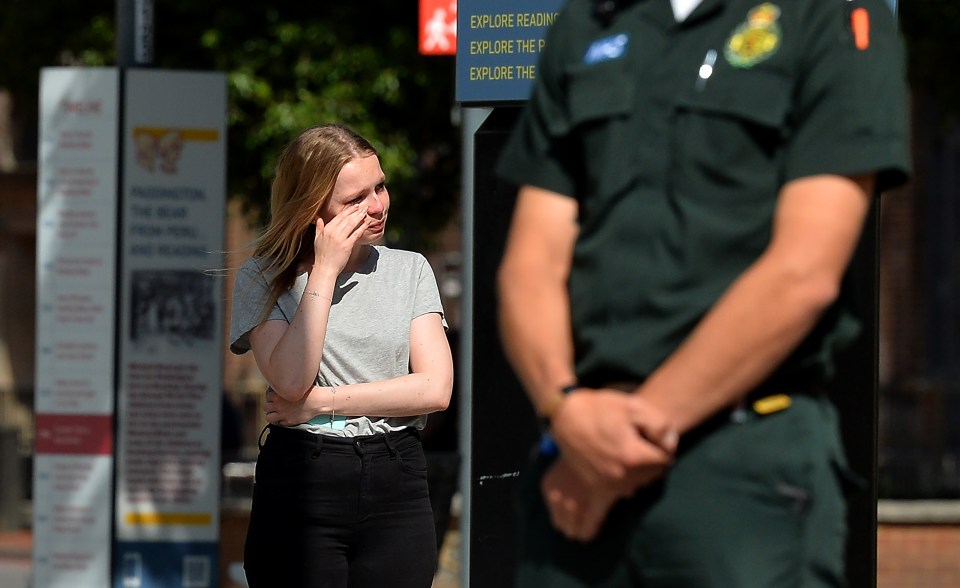 All pubs, cafes and restaurants to...