BORIS Johnson is under pressure to u-turn and give kids teacher assessed grades for GCSEs today after Northern Ireland announced they would ditch the computer model.

Just days before they are meant to get their results, politicians announced a change to how they will be graded after the huge fallout from A-level results last week.

Peter Weir, the education minister, said the decision would not delay the results and that there wasn’t enough data about GCSEs in order to use the computer model.

He said today: “These are exceptional circumstances and in exceptional times truly difficult decisions are made.

“I am conscious that for GCSEs, unlike at A-level, we do not have system level prior performance data for this group of young people.

“I want to encourage as many young people as possible to remain in education or training post-16 and to know they have another opportunity to engage with education.

“I am also mindful that unlike A-level, many GCSE pupils will not have access to previous public examination outcomes to inform any appeals process.

“I have, therefore, acted now in advance of the publication of GCSE results to ease anxieties, reassure young people and their families and ensure that every individual candidate receives a grade that recognises the work they have done.”

The PM is facing pressure from his party over the results fiasco that saw thousands of upset students receiving lower than expected A-level grades after exams were cancelled due to the coronavirus pandemic.

The Government has stood firm by using a computer result to adjust the grades from teachers – which many have said were too optimistic.

A staggering 39 per cent of A levels were downgraded by a computer algorithm last week.

And on Thursday the exact same thing is feared to happen when kids receive their GCSE results.

Yesterday Ofqual published its guidelines for how to appeal – but swiftly took them down after it emerged they contradicted the Government’s own policy on which grade could be used.

As of this morning they still haven’t republished the guidance, and kids are left in the dark about how to get their marks changed.

No Government ministers have been on the radio or TV today to explain the position as critics rounded on Education Secretary Gavin Williamson.

He tweeted on Monday: “So it looks like the Government ARE digging in and standing by their deeply flawed system.

“In that case, I will be taking legal advice this morning and have instructed leading Counsel. I expect to be writing to Ofqual later today to initiate action.”

Scorned students have mounted a flood of legal challenges against their botched A Level grades too.

Tory MPs rounded on the Government for the shambles.

Speaking about the appeals process, Mr Hammond, the MP for Wimbledon, told Sky News: “So it looks unfortunately like it’s developed … gone very rapidly from some clarity into a shambles.”

He called for Ofqual to get the appeals process sorted by the end of the day so pupils can find out what they need to do as soon as possible.

He added: “These young people are not an exam board number, they are real people who deserve fairness and a chance to have their futures put in a solid position very quickly.”

And he suggested that delaying GCSE results day “probably is the right thing to do”.

“I am increasingly thinking that Lord Baker is probably correct,” he told Sky News.

He said: “If you are in a hole, stop digging.

“I urge the Education Secretary to instruct Ofqual not to release the GCSE results this Thursday as their algorithm is flawed. The A-level results have produced hundreds of thousands of unfair and barely explicable downgrades.”

Robert Syms told Times Radio this morning: “We watched Scotland and the SNP get into trouble, and they sort of got into a bit of a hole. And they got out of it and took some criticism.

“And we’ve just climbed into the same hole, but we’re not getting out of it; we’re still digging at the moment.”

He added: “if the Government want to get out of this problem, the simplest solution is to accept grade inflation.

“Because I think the way they’ve done it with the algorithm, Ofqual, is I think more unfair than having grade inflation.”

Sir Robert Syms added that he would be “happy” for GCSE students to be awarded their teacher-assessed grades and that “most Conservative MPs would be”.

His own son had his grades marked down, he revealed.

Speaking about his son’s results, Sir Robert added: “A* down to B, A down to B and then two Bs. And he was downgraded anyway because they hard marked.”

He told the BBC Radio 4 programme: “Ofqual have got to work much more closely with Government. It’s completely wrong that the Gov, DFE and Ofqual are not singing from the same hymn sheet, especially on appeals.

“Ofqual have got to get their act together and be much more visible.”

One Tory MP told The Sun the crisis is “not quite a poll tax moment” but is making the government “look incompetent”.

And Labour big beast and ex Education Secretary Alan Johnson told The Sun that Mr Williamson should be sacked.

He said: “This job was totally beyond his capabilities. He should go. “They may try to blame it all on Ofqual, but this was Gavin Williamson’s mess and he has to take the bullet.”

The Department for Education has insisted that results had to be moderated to stop grade inflation going off the scale.

A Downing Street source insisted the PM does still have confidence in Mr Williamson.

Kids are furious their marks have been downgraded[/caption]

Bill Watkin, chief executive of the Sixth Form Colleges Association, told BBC Breakfast that, according to a study by the organisation, the “algorithm has failed”.

He said: “We’ve just done a study and we looked at 65,000 entries, which is almost half of all the A-level entries in sixth-form colleges, across 41 A-level subjects – every single A-level subject.

“In every single one of those 65,000 entries in 41 A-level subjects, they came out lower than the previous three-year average. So the algorithm has failed.”

A Department for Education spokesperson said last night: “Hundreds of thousands of students have received a calculated grade that will enable them progress to the next stage of their education or into work.

“We have been clear that we want to build as much fairness into the appeals process as possible to help young people in the most difficult cases and have been working with Ofqual to achieve that.

“Ofqual continues to consider how to best deliver the appeals process to give schools and pupils the clarity they need.” 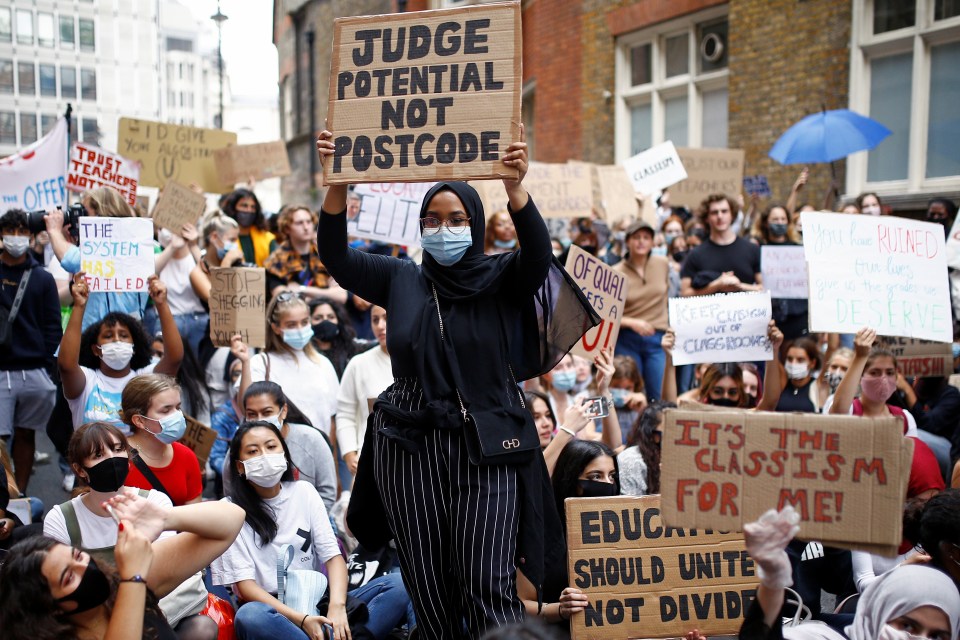 Pompeo mocked for saying ‘no other...