COPs are set to be bumped up the Covid vaccine list after Priti Patel said they would be among the frontline workers to be prioritised after vulnerable groups have had the jab.

The Home Secretary said the Government is looking at prioritising police, teachers and others who are “naturally at occupational risk of coming in contact with the virus”.

The Home Secretary said the Government wants to prioritise cops, teachers and those ‘at occupational risk of coming in contact’ with Covid[/caption]

Supermarket workers could also be bumped up the order of people invited to receive the vaccine.

The Joint Committee on Vaccination and Immunisation (JCVI) is meeting tomorrow to discuss which groups should be next in line after the 13 million people in Phase 1 have been inoculated.

Phase 2 of the vaccine rollout is scheduled to start after February 15 when all over-70s and health staff have received the vaccine, but frontline workers such as police and teachers may have to wait until all over-50s have been inoculated in the late spring.

Meanwhile a former Tory health minister last night called on the Government to even consider putting the UK’s 650 MPs on the vaccine priority list.

Steve Brine said inoculating MPs in phase two of the rollout would help “get our democracy back, adding: “Parliament’s a shadow, at best, of itself.”

Last week Burnley manager Shaun Dyche said Premier League footballers should also be considered as a priority – suggesting clubs could then divert the money saved from their costly testing regime to be diverted back into the NHS.

As of now, cops may have to wait until all over-50s have received the jab in the late spring[/caption]

Martin Hewitt, boss of the National Police Chiefs’ Council, last night called for police officers to be considered for the vaccine “as soon as that first phase of the vaccine has been completed”.

He told last night’s Downing Street press conference: “You can’t police at two metres distance, we have to do the job to protect people to deal with the crime that we’d be dealing with.”

Policing Minister Kit Malthouse backed the calls, saying police have “a strong case” for access to the jabs before they are opened up to the general population.

Asked whether police officers should be bumped up the priority list, Ms Patel told the press conference: “We are looking at those who are on the front line such as police officers, teachers and others who are naturally at occupational risk of coming in contact with the virus.”

“We are absolutely working to make sure that we can get the vaccine to them but that means working with the JCVI.”

It came after Britain’s most senior police officer called on the Government to put cops at the front of the queue.

Boss of the National Police Chiefs’ Council Martin Hewitt called for jabs and said ‘You can’t police at two metres distance, we have to do the job to protect people’[/caption] 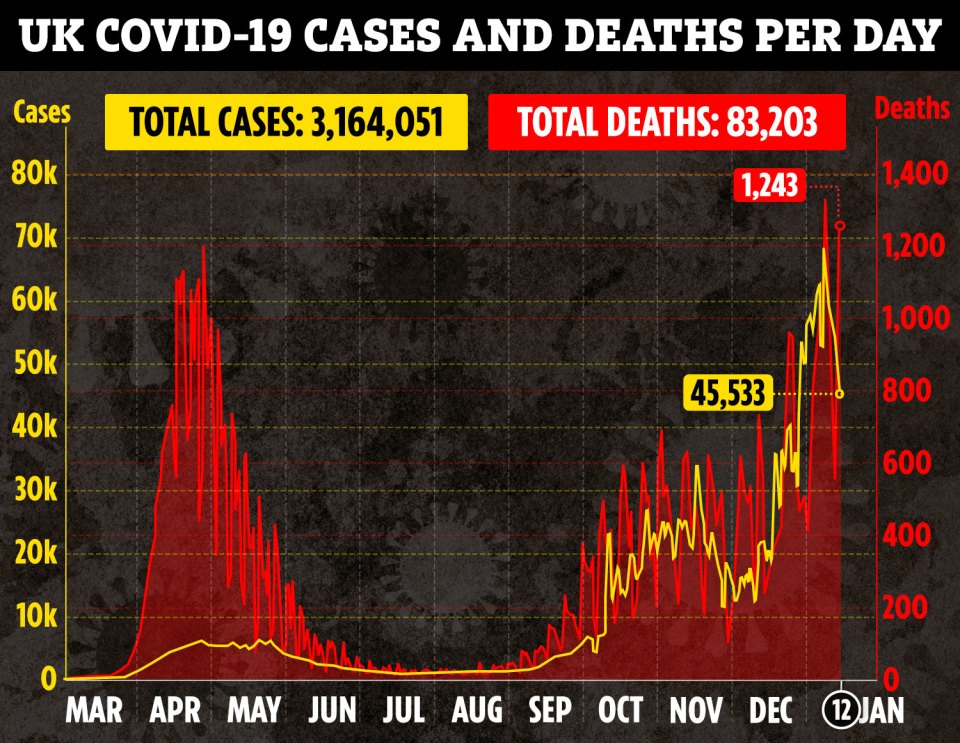 Met Commissioner Cressida Dick said: “By necessity, frontline police officers and staff interact with many people every day and are sometimes inevitably in close contact, whether helping injured victims or detaining offenders.

“I have been asking the government to consider that the unique environments in which frontline colleagues work are properly recognised in the prioritisation process for vaccines.

“The case for frontline officers so they can continue to keep others, as well as themselves, safe is very strong. I am delighted to hear this is being actively discussed.”

One in five calls to the HMRC for...