MILLIONS of families and friends will be allowed to visit each other’s homes and stay over for the first time in 3 months, Boris Johnson announced today.

People in England will be able to have sleepovers and stay with family or friends from July 4, but they will still have to keep their distance.

Boris Johnson announced a huge easing of the lockdown later[/caption]

It means families will finally be able to see grandparents and stay the night – but only two households can merge at any one time.

However, the new rules allow people to see one household one weekend, and a different household another day – so families won’t have to choose who to see.

The two households meeting up can include people who are 70 and over.

People who are in clinically vulnerable groups should consider this when deciding who to meet up with, and should continue to follow advice on safe social contact particularly carefully.

At the moment no one is allowed inside another person’s home unless they are a single person household who has bubbled up.

The welcome news is among a raft of measures the PM has announced today as part of the biggest lifting of lockdown restrictions so far – to take effect on July 4.

The PM said in the House of Commons this afternoon: “We advise that from 4 July, two households of any size should be able to meet in any setting inside or out. That does not mean they must always be the same two households.

“It will be possible for instance to meet one set of grandparents one weekend, and the others the following weekend.

“We are not recommending meetings of multiple households indoors because of the risk of creating greater chains of transmission.

“Outside, the guidance remains that people from several households can meet in groups of up to six.

“And it follows that two households can also meet, regardless of size.”

He said that it would be down to people’s “common sense” to do what they felt right to tay safe.

But he added: “There is one certainty: the fewer social contacts you have, the safer you will be.” 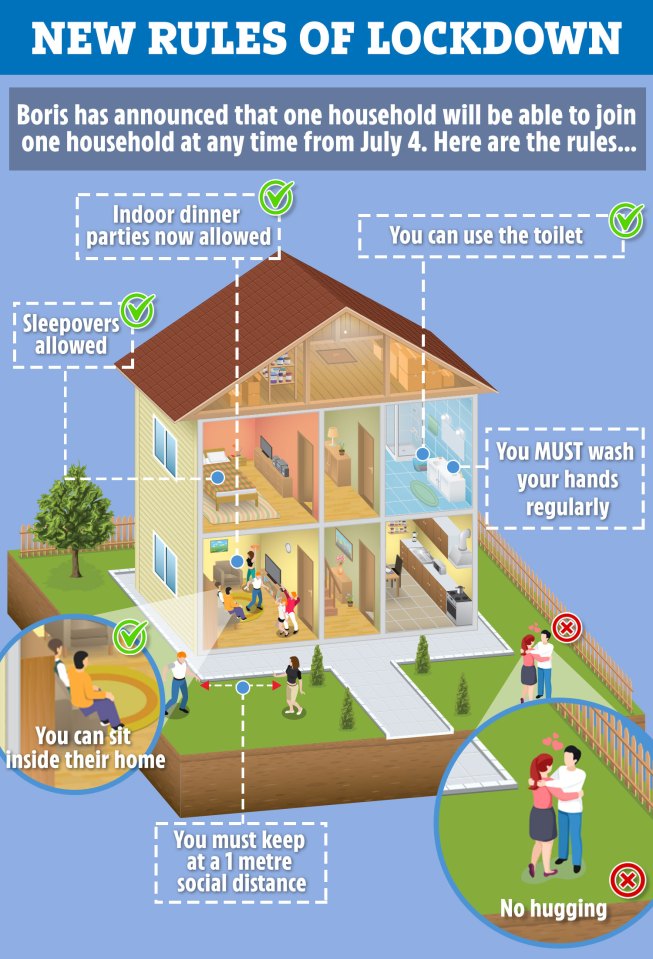 The move is similar to new rules announced for Northern Ireland, which is allowing six people to meet indoors from tomorrow.

But strict new measures will have to be in place for pubs and restaurants to operate at one-metre social distancing instead of two-metres.

The PM delivered the much-needed dose of good news a day after Britain recorded the lowest daily death toll since mid-March, with just 15 deaths recorded on Sunday.

He told the House of Commons: “Today, we can say that our long national hibernation is beginning to come to an end.

“Slowly but surely, these measures will restore a sense of normality.

“After the toughest restrictions in peacetime history,   we are now able to make life easier for people to see more of their friends and families.

“And to help businesses get back on their feet and get people back into work.”

But No10 warned that the “handbrake” could be slammed back on if there is an uptick in new infections following the latest relaxing of measures.

A Downing Street source said: “We are only able to move forward this week because the vast majority of people have taken steps to control the virus. But the more we open up, the more important it is that everyone follows the social distancing guidelines. We will not hesitate to reverse these steps if it is necessary to stop the virus running out of control.”

It is understood that the plans will automatically allow any venue with an alcohol licence to serve their drinks to take away – in a boost for pubs who may be allowed to open again from next month.

The new legislation will also relax planning rules to extend deadlines for existing planning permissions, which were hit by lockdown.

The PM’s spokesman said: “There is a Covid Bill which will look at new ways of working as the country recovers from the disruption caused by coronavirus and which is intended to help businesses through the summer months, in particular.”

Yesterday Scotland’s First Minister Nicola Sturgeon tore into Mr Johnson for lifting restrictions too quickly – branding him “reckless”. There have been no new coronavirus deaths have been registered in Scotland for the sixth day running.

Ms Sturgeon said it was “tempting” to rush to unlock restrictions but warned the move could trigger a new spike in infections.

Speaking at her daily press conference yesterday, Ms Sturgeon said: “The virus hasn’t gone away, there are already countries – China and Germany for example – that are right now dealing with spikes in cases as a result of significant outbreaks. And health officials in South Korea have said they think the country is now experiencing a second wave.”

Tonight’s daily press briefing will be the LAST one, No10 reveals

Coronavirus UK LIVE: Pubs and hairdressers to reopen in 10 DAYS

“I know that when numbers of cases and deaths here are continuing to fall it is very tempting for all of us to think it is all over and we should just now quickly get back to normal.

“We are trying to get back to normal and we want to do that as quickly as possible, but let me reiterate my strong view that acting recklessly now would be a serious mistake.

“But it will also hopefully put us in a much stronger position ahead of the winter months to come.”

Meanwhile deputy chief medical officer Jenny Harries warned that countries in places such as Africa and South America had yet to reach their own peak in coronavirus infections, which risks having a spillover effect on the UK.