NORTHERN mayors are threatening to sue Rishi Sunak over plans to force their cities into lockdown.

They have branded the Chancellor’s latest bailout package “stingy” and claimed it would condemn ten million people to hardship, opening a vast new North-South divide.

Tough restrictions will be imposed on Covid hotspots where the killer virus is spreading fastest.

Boris Johnson will unveil a three-tier lockdown system this week to bring it under control.

But the leaders in Liverpool, Newcastle, Sheffield and Manchester are in revolt.

They claim the draconian clampdown will turn the North into a “permanent open prison”.

And they vowed to fight in court rather than surrender their people to poverty, job losses and misery in the run-up to Christmas.

Mr Sunak told local leaders his second furlough scheme, which pays laid-off workers up to two-thirds of wages to a limit of £2,100, is “final and non-negotiable”.

But the city leaders issued a call to Tory MPs in former Red Wall Labour strongholds to back them.

Liverpool mayor Joe Anderson said: “I feel that the North is being treated with disdain by this Government.

“I just wonder that, if this was in southern areas or in London, whether it would be at this level and not a different level.”

Manchester mayor Andy Burnham appealed for cross-party support from MPs for a vote in Parliament on the new support proposals, saying they “would surrender our residents to hardship and bring an economic blow that would level down the North”. 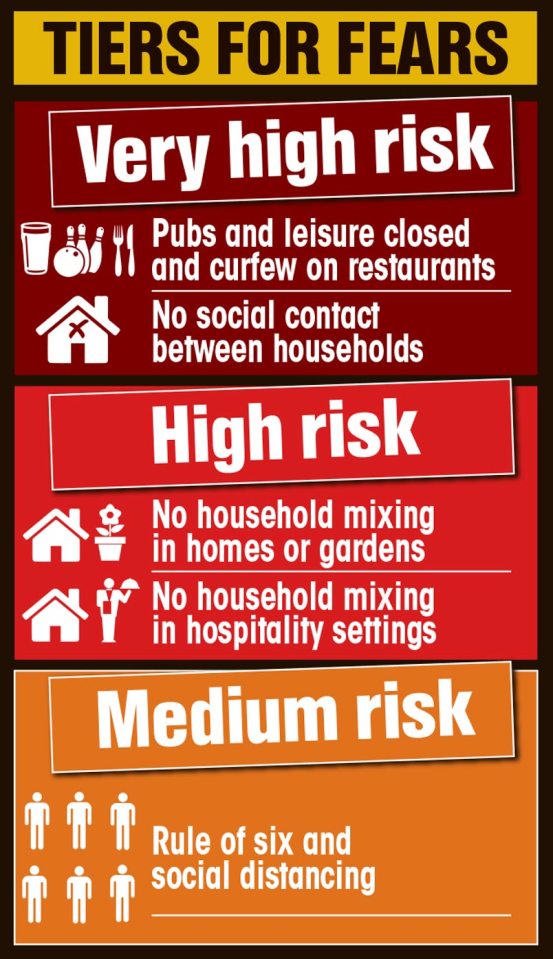 And he added: “I would not rule out a legal challenge.”

Mr Burnham made his demands in an open letter also signed by the Liverpool City Region mayor Steve Rotheram and the mayors of Sheffield and North of Tyne.

Labour claim one in 15 jobs will not be covered by the bailout.

BRITAIN will be carved up under a three-tier system based on infections rates.

Those with the highest level will face the toughest restrictions, with pubs forced to close and strict controls on mixing.

Ministers have ditched the idea of a “traffic light” coding, fearing that people in “green” areas may feel they are safe to carry on as normal.

They will also avoid the phrase “low-risk” and are likely to call the bands “very high risk”, “high risk” and “medium risk”.

Workers at firms forced to close will get two-thirds’ wages paid by the Government.

Britain’s hopes of a US trade deal...