Echoing his streamlining of social mixing regulations into a simpler “rule of six” the PM wants to implement a new tier system for threat level as soon as possible. 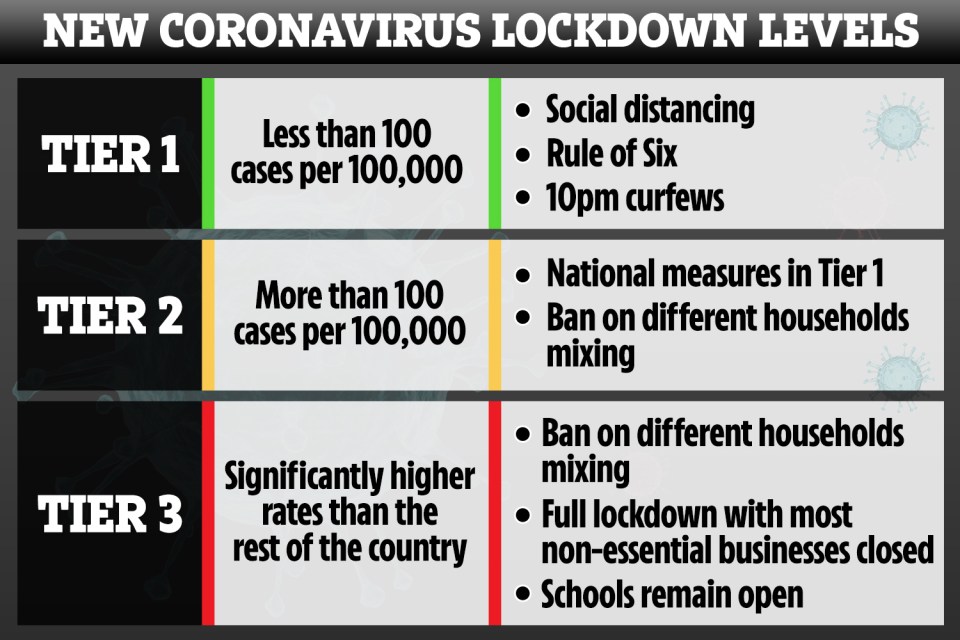 Officials are working around the clock to flesh out the clearer system after the PM and his ministers were humiliated on the airwaves over their own confusion at the rules that can vary town to town.

Each threat level would have different restrictions linked to them, based on the number of local cases.

Areas with around 100 cases per 100,000 would qualify for tier one status according to an early draft of the plan and see greater enforcement of social distancing and mask wearing.

But if cases rose above that, such as in the North, then they would be classed as Tier 2 and see bans on household gatherings.

If that failed to work, areas could hit Tier 3 and be placed in to a more extreme form of lockdown that could see pubs, restaurants and shops ordered to shut in order to keep schools and other workplaces open

Last night the Department of Health insisted that no changes to the local lockdown measures were imminent, but Downing Street did not deny the plan.

No10 insisted: “We keep all of the measures which we put in place under review – if there is anything further to set out then we will do so to the House”.

The move will allow some areas of the country currently hit by severe lockdown measures to be granted more freedom to mingle.

Mr Johnson is expected to unveil the changes next week after signing them off with his Cabinet as soon as this weekend.

It comes after another raft of local measures were brought in for Liverpool, Middlesbrough, Hartlepool & Warrington.

Today’s news means around 20 million people across the UK are now living under local lockdown restrictions.

The Government has been criticised of having patchwork systems of local restrictions which no one can understand.

Even Mr Johnson stumbled over what the rules were in the North East, after mixing with other households indoors and in pubs became illegal.

Labour leader Sir Keir Starmer has called for a “rapid review” of the local lockdown strategy.

Sir Keir said yesterday: “One of the major problems, is widespread confusion about the local restrictions.”

Conservative Bolton council leader David Greenhalgh, where restrictions were relaxed slightly today, said the rules have become “too complex and too complicated”.

‘I SLIT THEIR THROATS’


Headteacher who stabbed wife & lover 103 times is caged for life