A NEW strain of coronavirus which may spread even quicker has been identified in large parts of England, Matt Hancock revealed today – as he plunged millions more Brits into Tier 3.

The Health Secretary told MPs that a new “variant” has been discovered in up to 60 places across the UK – and the World Health Organisation has been informed. 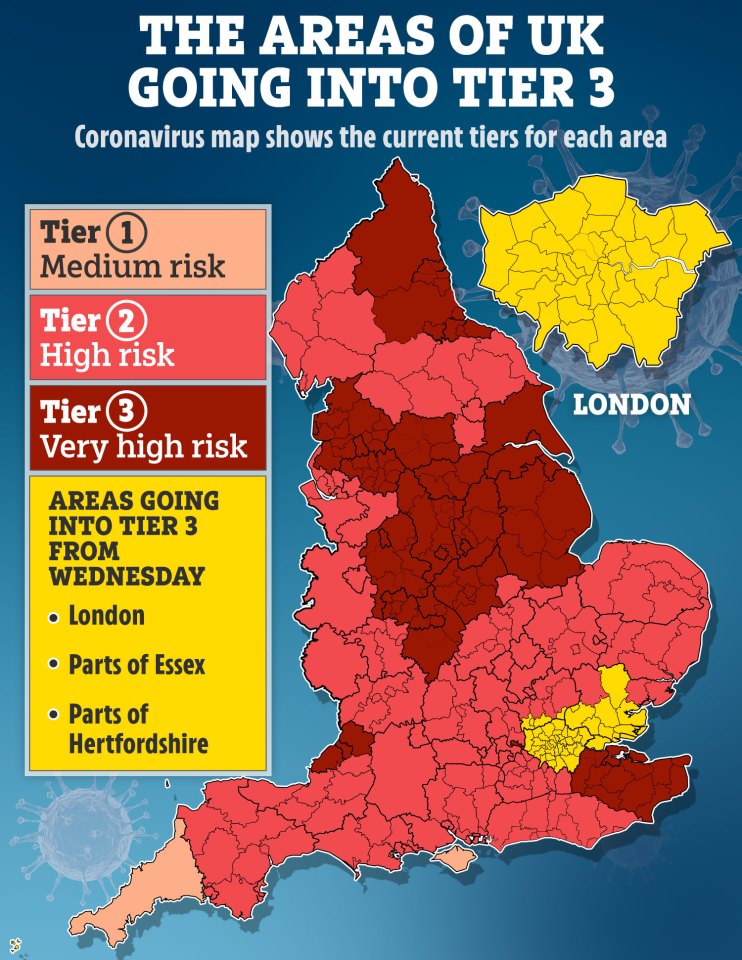 London, parts of Essex and parts of Hertfordshire will move into Tier 3 from 12.01am on Wednesday, he told the Commons today – with the next review due to take place a week later on December 23rd.

This means that people can only see friends and family they don’t live with, or are in a support bubble with, in indoor or outdoor public places – but shops, gyms and schools will remain open.

The emergency plans will mean pubs and restaurants will be forced to shut, but Mr Hancock urged Londoners to follow the example of Liverpool and Manchester to drive the virus down again.

And on the new strain, he revealed: “We have identified a new variant of coronavirus which may be associated with the faster spread in South East England.

“It is growing faster than existing variants, with over 1,000 cases.

He told the Commons: “Initial analysis suggests that this variant is growing faster than the existing variants.”

There are over 60 areas affected, which is “growing rapidly” and similar strains have been identified in other countries, he said.

He added: “We’ve seen very sharp exponential rises of the virus across London, Kent parts of Essex and Hertfordshire.

“We must take fast and decisive action.”

At tonight’s press conference he said the “rise in transmission and this new variant should be a warning to all” that “personal responsibility” was needed going into Christmas.

He warned: “Respect the rules where you are, don’t ease up on simple things.”

He begged everyone to reduce their social contacts in the next few weeks to crack down on cases.

More areas could be plunged into Tier 3 later this week too, he suggested.

He said: “This moment is a salutary warning for the whole country.

Professor Whitty said it was difficult to know if the new variant was spreading quicker or not – and that it would be “surprising but not impossible” it would not react to a vaccine.

And he suggested the reason Tier 3 has not worked in areas like Kent was because London – where many people travel in and out for work – was still in Tier 2.

However, he slapped down suggestions that the reason the Tiers wee being ramped up was because of the new strain – and insisted that cases were rising across the board.

The World Health Organsiation and Public Health England are continuing to look into the new killer strain.

And he said: “The best thing to do in the face of the virus is to act fast… And we do not rule out further action.”

“But it shows we’ve got to be vigilant and follow the rules and everyone needs to take personal responsibility not to spread this virus,” he added.

The strain was first detected in Kent last week – and it’s not yet known if it’s a home-grown mutation or has come in from abroad.

And it’s understood that two weeks of lab testing is needed for experts to be completely sure that it will still be able to be tackled by the vaccine.

One source said: “The new strain is thought to be partly to blame for the rise in cases in London but is not the only factor.”

Prof Jonathan Ball, Professor of Molecular Virology, University of Nottingham, said it was too early to draw any conclusions yet and stressed it could be by chance.

He said: “The genetic information in many viruses can change very rapidly and sometimes these changes can benefit the virus – by allowing it to transmit more efficiently or to escape from vaccines or treatments – but many changes have no effect at all.

“Even though a new genetic variant of the virus has emerged and is spreading in many parts of the UK and across the world, this can happen purely by chance.

“Therefore, it is important that we study any genetic changes as they occur, to work out if they are affecting how the virus behaves, and until we have done that important work it is premature to make any claims about the potential impacts of virus mutation.”

Full list of places going into Tier 3 from Wednesday

Mr Hancock told MPs that people should be careful about travelling – and avoid travelling in or out of Tier 3 areas.

That includes for Christmas shopping, he stressed.

In a press conference tonight alongside Professor Chris Whitty, he said cases were rising across all age groups – not just young people.

This morning, health bosses delivered a grim briefing to London MPs this morning warning that Covid is once again surging through the capital.

Infection rates have rocketed “exponentially” in all boroughs apart from Kensington and Chelsea, and cases are now “off the charts”, politicians were told.

London’s hospital occupancy now stands at 93 per cent, too, with MPs worried about the impact in January, one of the busiest times of the year.

He also said that average daily hospital admissions in the area were up 13 per cent, average daily cases have risen by 14 per cent in the last week.

Before the surge in infections in the last few days, the earliest London was expected to go into Tier 3 was December 19, a few days after the review on December 16.

But the timetable has been dramatically hauled forward, with scientists and ministers believing more urgent action is needed to stop the sudden spiral in cases.

Last week Mr Hancock announced mobile testing units to be ordered into schools in London and the South East over soaring cases.

The health horror stats have spooked ministers who are desperate to stamp down cases before the Christmas lockdown amnesty kicks in, and cases are likely to rocket.

London Mayor Sadiq Khan said today: “This is incredibly disappointing for our businesses who have suffered so much already this year. But it’s clear that the virus is accelerating in the wrong direction once again across London and the lives of Londoners are at risk.”

And Kensington and Chelsea MP Felicity Buchan – whose area is the only one not to have seen a rise in cases – argued for London to be treated as boroughs rather than a whole.

The Tier 3 will be another harsh blow to pubs and restaurants. who have already been struggling for months.

One pub landlord, Gary Murphy, who owns Ye Olde Mitre Inne in North London told Sky News he was “devastated” at the decision.

He said: “We’ve done everything we possibly can and here we are again, closed down.

“I’ve got a load of stock downstairs.. I’m going to have a load leftover unless I can persuade the people of Barnet to have a last drink tonight.

“Lots of beer will be going down the drain.”

Mr Murphy said the coronavirus crisis has been “unbelievably bad” for his pub.

“We have lost half a million in turnover. I’ve had no income since March. We really are struggling.”

And in a bombshell intervention, health bosses have floated plans to toughen up Tier 3 amid fears the restrictions do not do enough to curb rates – but ministers have not signed up to the idea yet.

Public health chiefs told MPs this morning that more needed to be done, and Tier 3 was not having an impact in areas such as Kent.

It’s not yet clear whether ministers are considering it.

Downing Street said this lunchtime the Tiers system had already been set out, but refused to deny it could be changed.

London’s shops were packed with people over the weekend[/caption]

And Mr Khan has demanded schools be closed yet again to crack down on cases.

The move would force hundreds of thousands of pupils to study online and comes after Education Secretary Gavin Williamson’s vowed to keep kids in school.

He revealed there has been a 75 per cent surge in coronavirus cases across the capital, but put it down largely to kids between the age of 10 to 19-years-old.

“I don’t see many 10 to 19-year-olds in pubs, bars, restaurants,” Mr Khan said, as he urged the Government to close schools a few days early rather than punishing the hospitality sector.

In a letter to the Prime Minister, he said “urgent consideration must…be given to closing secondary schools, sixth form and FE colleges a few days early and keeping them closed for longer after Christmas”.

“With significant outbreaks among 10 to 19-year-olds, the Government must consider asking schools and colleges to close early and re-open later in January, with extra resource provided to support online learning.”

Councils for the London boroughs of Greenwich and Islington have told schools in their areas to close early and move to online learning because of the surge in cases in kids.

Schools in the area will stay open for kids of key workers and vulnerable pupils.

Downing Street has said schools are expected to stay open until the end of term. 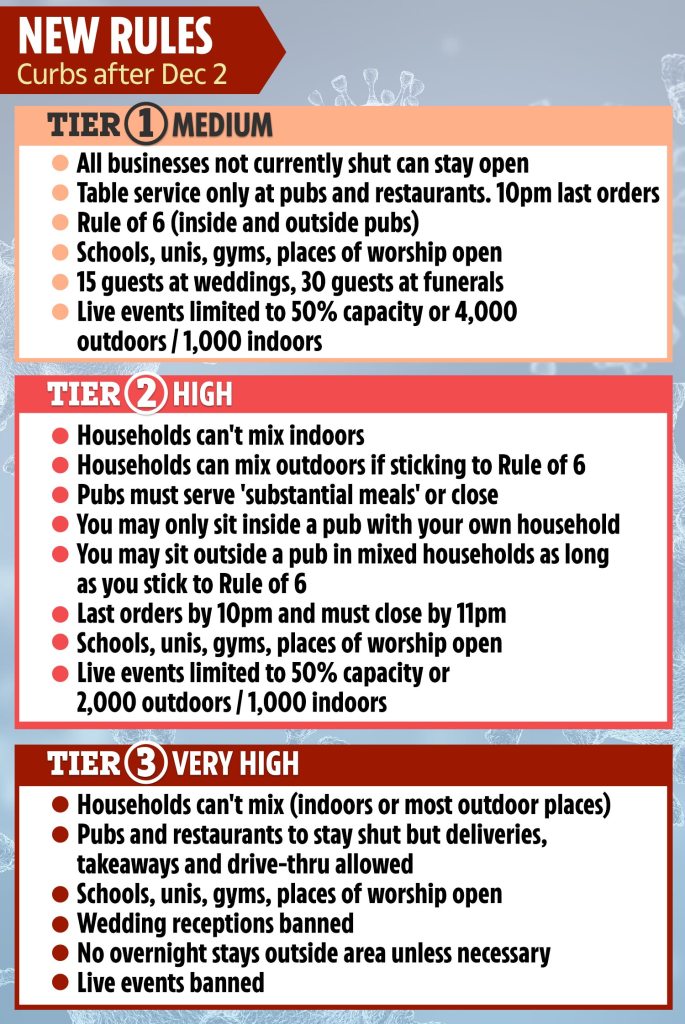 The Prime Minister’s official spokesman said: “We’ve consistently said that not being in school has a detrimental impact on children’s learning as well as their own personal development and mental health.

“Which is why we expect all schools and colleges to remain open until the end of term on Thursday, as schools have remained open throughout the pandemic.”

He declined to comment on whether any action would be taken against them if they defied orders.

MPs were told by health ministers that schools would not be closed – and that shutting them would mean teenagers hanging around in shopping centres and other areas spreading the virus instead.

But another MP said: “Secondary schools should close today and go into remote learning.”

Mr Khan has also demanded all workers who can’t stay home be tested and for people to wear face coverings outside in public spaces too.

The average number of new cases over seven-days has risen in 32 local authority areas. 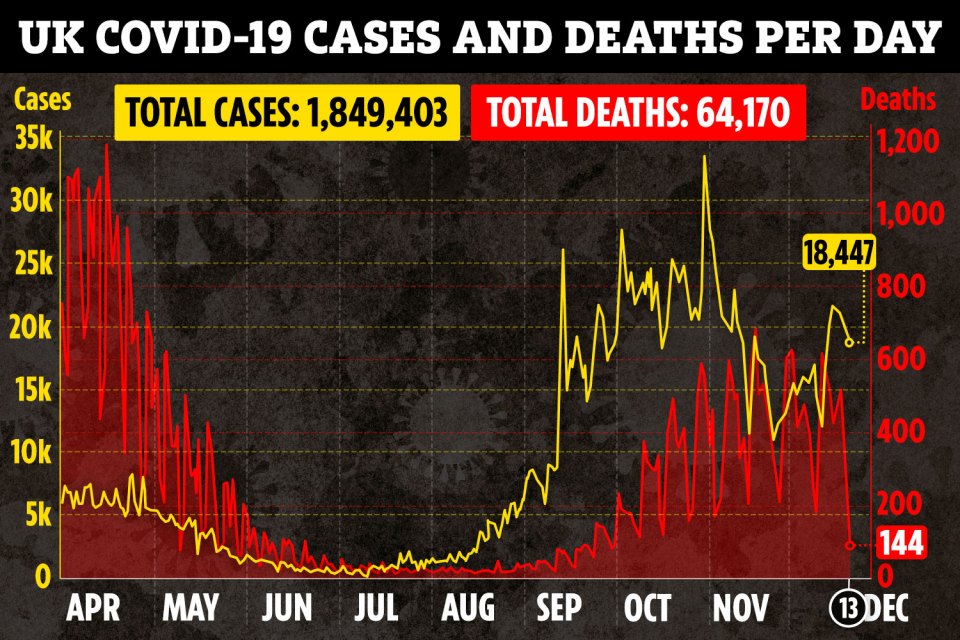 
Christmas bubbles WILL go ahead even if you are in Tier 3, No.10 confirms

According to the latest figures, the borough of Havering has the highest coronavirus rate in London, with 1,314 new cases recorded in the seven days to December 9 – the equivalent of 506.3 cases per 100,000 people.

Matt Hancock to give press confere...