As well as the bed ban, residents can only leave the highest risk regions for essential travel such as work, education or health reasons, and must return that day. 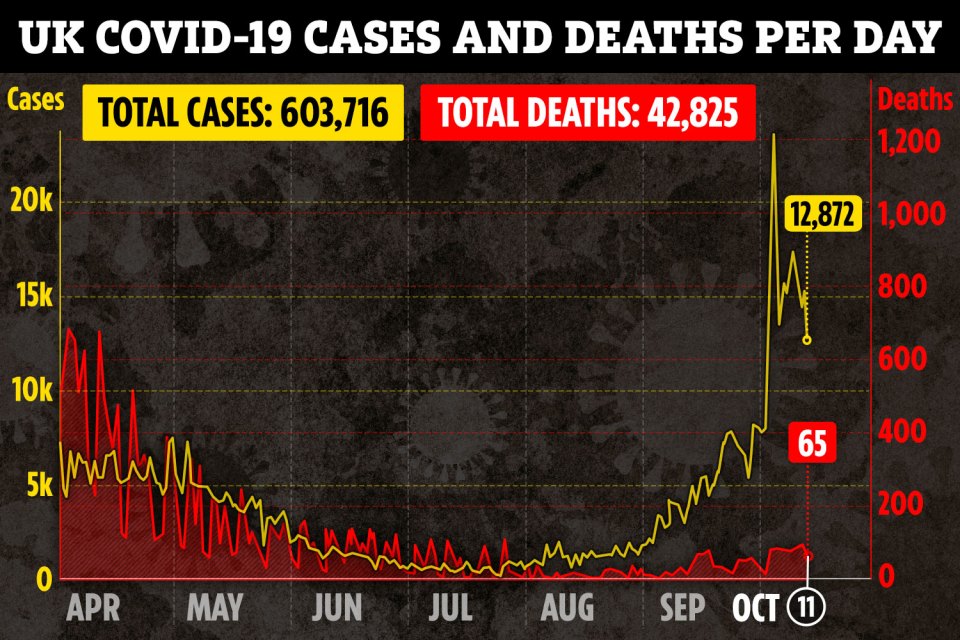 And anyone visiting the danger zones will be banned from staying overnight.

Mr Johnson will announce his “tiers for fears” system today — with Tier Three the highest risk.

Last night he told the Cabinet the nation stands at a “critical juncture” and more must be done to avoid triggering full lockdowns.

Tier Three households will not be allowed to mix either indoors or outdoors.

Pubs and bars will also close in those areas, but it is understood restaurants will continue serving food until 10pm following a major backlash from regional leaders.

The restrictions are likely to hit Liverpool, Manchester and parts of Yorkshire from as early as today. They will be reviewed monthly.

Thousands piled into pubs until the 10pm curfew then drank on outside.
Revellers swarmed to London’s Piccadilly Circus.

They also packed streets in Manchester, Liverpool, Leeds and Newcastle — likely to bear the brunt of the PM’s toughest new measures.

Pubs and bars will close in Tier Three areas[/caption]

The PM sees his clampdown, to be unveiled this evening, as a gamble to avoid a nationwide “circuit breaker” shutdown over half term.

That is still on the table according to one senior minister — although it was publicly denied today.

Suspicions were heightened in Westminster when a Commons holiday was hastily scheduled to coincide with schools being off later this month.

He added: “Earlier in the year, we were fighting a semi-invisible disease, about which we had little knowledge, and it seeded in the community at great speed.

“Now we know where it is and how to tackle it. Let’s grasp this opportunity and prevent history from repeating.”

This morning Mr Johnson will hold a Cobra meeting to determine the exact rates at which the three tiers — medium, high and very high — will kick in.

The PM will update MPs in the afternoon before an evening briefing to the nation alongside Chancellor Rishi Sunak.

Tier One — medium risk — will see current social distancing measures, the “rule of six” and a pub curfew of 10pm enforced.

Areas in Tier Two will have the same restrictions plus a ban on households mixing.

Only two households will be able to mix, and then only in gardens. In Tier Three “very high” risk areas overnight stays will be outlawed for residents and visitors.

Pubs and bars will be required to close and no household mixing will be allowed for socialising either indoors or outdoors.

Tier Three gyms and leisure facilities are expected to close. But, after a furious backlash, restaurants are likely to be able to serve until 10pm but without booze.

Liverpool, Manchester and parts of Yorkshire are on red alert to be placed in Tier Three, possibly with Exeter in the South.

“Travel will only be allowed outside the Tier Three area for essential reasons, but schools, colleges and retail will all remain open.”

He added: “Many of the fantastic hospitality businesses we have in our region will not be eligible for this new support as the rules will not legally require them to close.

‘NO ONE IS PUNISHING THE NORTH’

“But due to a ban on households mixing, they will suffer a significant fall in customers and trade.”

Ministers were keen to stress “no one is punishing the North” after a backlash from city mayors.

Housing boss Robert Jenrick insisted the clampdown would be universal and set by infection rates rather than regionally.

But experts warned hospitals in the North East and North West are close to breaking point.


Pregnant woman, 22, dies along with unborn baby after ‘child cut from womb’

Professor Peter Horby, of the New and Emerging Respiratory Virus Threats Advisory Group (Nervtag), said: “We have a doubling time of about eight to 15 days so it is not long before those ICU beds could be full.”

He admitted a second national lockdown was a possibility.

Tonight Downing Street said: “This is a critical juncture and it is absolutely vital that everyone follows the guidance to help contain the virus.”

In Liverpool, revellers enjoy what could be their final night out[/caption]

Newcastle was full of people enjoying their Saturday night[/caption]