Close
Trending News
HomePoliticsMPs to have a vote on any national lockdown, reveals Matt Hancock in move to stave off Tory rebellion

MPs to have a vote on any national lockdown, reveals Matt Hancock in move to stave off Tory rebellion

MPs to have a vote on any national lockdown, reveals Matt Hancock in move to stave off Tory rebellion

MPs will get the chance to vote on any future national coronavirus lockdowns as part of a bid to stave off a Tory rebellion, Matt Hancock announced this afternoon.

The Health Secretary stressed that the emergency powers used to fight the virus have been “critical” – but conceded to unhappy MPs that they would get a say over new measures “wherever possible”.

It comes after the Speaker of the House of Commons refused to give Tory MPs a vote on new coronavirus laws but gave the PM a slap down for not giving MPs a say on emergency measures.

As many as 100 Tory MPs were said to be ready to revolt against the further coronavirus laws tonight after demanding they be given a say on incoming rules.

Many new laws have been brought in overnight with no debate or scrutiny from MPs.

Mr Hancock said this afternoon: “I understand these are extraordinary measures but they remain temporary, time limited and proportionate.

“We need to have the powers at our disposal to act quickly.

Acknowledging the MPs’ alarm at further measures, Mr Hancock said more would be done to strike a balance between giving MPs the chance to provide “proper scrutiny” and giving ministers the power to act fast.

He said: “I can confirm to the House that for significant national measures with the effect in the whole of England or UK wide we will consult parliament.

“Wherever possible we will hold votes before such regulations come into force.”

But following Mr Hancock’s statement Sir Graham thanked the Health Secretary for listening to concerns and backed down from open rebellion.

He said: “Members on both sides understand the importance of ministers having the freedom to act quickly when it’s necessary, but we are grateful that he, and other members of the Government, have understood the importance of proper scrutiny in (Parliament).”

“@MattHancock has set out consultation and votes will come for UK and English decisions. The same should happen in all parts of our nation.”

Sir Lindsay Hoyle said this lunchtime he would not allow the amendment, spearheaded by Sir Graham, to be voted on because it would risk flooding the emergency powers with uncertainty – or make them beholden to the courts.

The Speaker told MPs: “I have concluded on the basis of the advice I have received that any amendment to the motion before the house risks giving rise to uncertainty about the decision the house has taken.

“This then risks decisions which are rightly the responsibility of parliament ultimately being determined by the courts, the lack of clarity risks undermining the rule of law.”

Even with the scores of Tory rebels, Mr Johnson’s massive majority meant the new laws would’ve made it over the line if the amendment had been allowed.

Sir Lindsay also gave the Government a dressing down over failing to give MPs enough of a say over new measures, telling the PM that publishing measures only hours before they came into force “shows total disregard” for the House.

He demanded the PM work to “rebuild trust” with Parliament by ensuring there was more debate on new rules.

He said: “I am now looking to the Government to rebuild the trust with this House and not treat it with the contempt that it has shown.”

Labour MPs were not as open to a peace-deal as rebel Tories, claiming it does not amount to a real olive branch.

Labour MP for Rhondaa Chris Bryant tweeted: “This government ‘concession’ to allow parliament to look at ‘significant national measures’ isn’t worth the paper it isn’t written on.

“I shall not be voting for the act today because it’s take it all or leave it all.”

One of the chief Tory rebels Steve Baker said Boris Johnson fumbling over the new regulations in the North East yesterday and having to apologise for “mis-speaking” was an example of the confusion caused by the lack of debate.

Mr Baker told BBC Radio 4’s Today programme: “I think it was a vivid illustration of the problems you have when a hundred Acts of Parliament are used to put in place 247, I think it is, pieces of delegated legislation … which are subject to repeated amendment and revocation.

“When you get such a large and shifting body of law, you find even ministers and the Prime Minister cannot keep up with it.”

But he accepted Mr Hancock’s compromise, saying on Twitter: “I’m grateful to the Government for agreeing enhanced scrutiny of and voting upon coronavirus delegated legislation. This is a major step forward.” 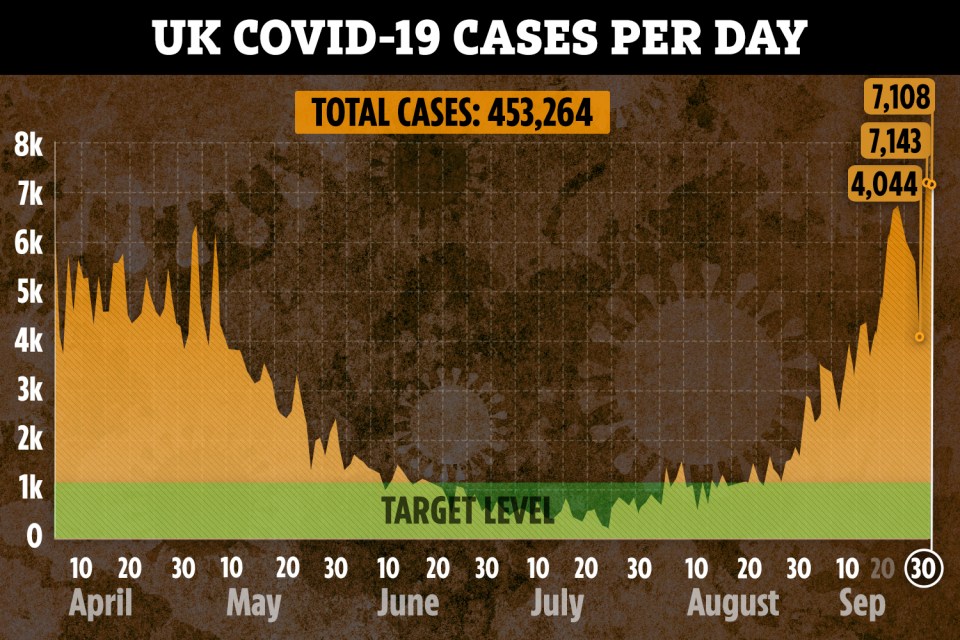 He will stand up this afternoon with his top boffins and go through the latest grim data after the UK recorded its highest number of coronavirus infections yesterday – 7,143.

He’s expected to bring back regular press conferences – which could be as often as weekly – to update the nation as Britain faces the second wave of the virus.