MORE child migrants have arrived at Dover as dozens more made the perilous crossing today.

Home Secretary Priti Patel has vowed to end the illegal crossings through the Channel and crack down on criminal gangs who prey on families desperation to find a way to get to the UK.

Tiny babies were among the latest wave of migrant arrivals[/caption]

Tiny children who had to be carried ashore by Border Control officials were among some of the latest wave of migrants to cross the Channel today.

More than 900 people have arrived in the last 10 days.

The Sun revealed this week how ruthless people-smugglers are promising parents that “kids will go free” on the tiny boats to persuade them to fork over cash for the journey.

A charity worker in northern France told The Sun: “We’ve spoken to people intercepted en route to the UK who have told us how babies and infants are getting into dinghies for free.

“Younger children and teenagers are being allowed on for just a few hundred pounds a time.”

Kent County Council fears it will soon reach care capacity for children as centres are filling up “very, very fast”.

Council leader Roger Gough said arrivals this month could exceed 100 – a monthly figure not seen since the last major migrant crisis in 2015.

He added: “One (centre) which we actually emptied last week and which we reopened on Saturday, we are now almost full already.

“So this is the pace at which events are moving. The real question is what we can do to sustain that reception for those young people if the arrivals continue at the rate they do and we are unable to place those children with other local authorities.”

Last week, a heavily pregnant woman made it to Dover on a tiny dinghy packed with people.

Immigration minister Chris Philp met with officials in France earlier this week to thrash out a “new, comprehensive action plan” to stem the surge in crossings and demand the French step up the action they are taking.

Earlier this week the RAF was brought in to help the effort to stop migrant crossings.

At least three RAF planes have been monitoring the Channel from the sky this week to help the coastguard and Border Force spot people attempting to cross.

But suggestions the Royal Navy could be sent int to stop the migrant crisis in the Channel was called a “declaration of maritime war” by the Mayor of Calais.

Natacha Bouchert said earlier this week: “We in Calais, we are hostile to this scenario (of using the Royal Navy).”

“Rather than accept migrants who go on to work in the black economy, and giving us lessons, Boris Johnson would be better off introducing legislation to review reception conditions in his country.” 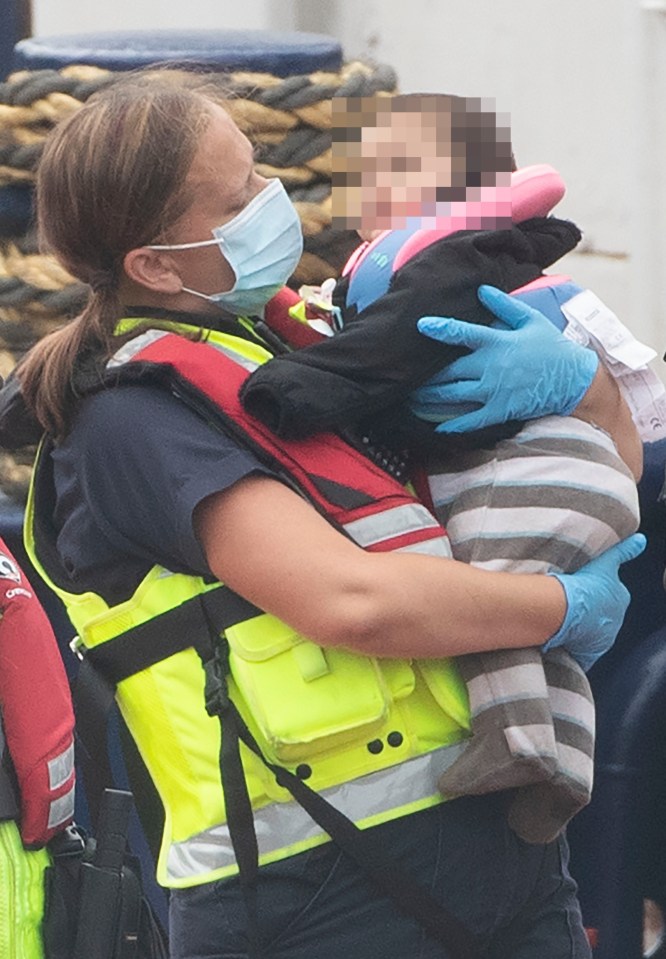