ENGLAND will only be able to fully reopen in June if everyone carries on strictly following the lockdown rules, Matt Hancock warned today as he defied calls from Tory MPs to speed up the loosening of restrictions.

The Health Secretary said it’s “on all of us” to ensure that the target dates laid out in the PM’s roadmap to freedom are hit on time, by helping keep the spread of the virus stays under control.

And he insisted there is no way of bringing forward the reopening of key sectors like hospitality because the five-week gap between different stages of the unlocking must be maintained.

Mr Hancock said even after the main restrictions are eased he expects some measures, like face masks on public transport, to be accepted by the public on a voluntary basis and become the new normal.

He said: “We’re all absolutely determined to come out of this as fast as safely possible and no faster.

“What matters is that this is on all of us, it depends on how all of us respond.

“Right now we need to keep doing what we’re doing and staying home to make sure we can keep the rates coming down as we roll the vaccine programme out.

“This is only possible because of the vaccine roadmap which has been amazing, but it’s also vital everybody plays their part as they have been doing during lockdown.

“This isn’t just on us in Government, although we will play our part. It is on everyone to act together, to keep doing their bit to make sure that we can hit these dates and get out of this, as soon as we possibly can safely.”

Mr Hancock said ministers will make the announcement of whether each planned stage of the reopening will go ahead one week in advance.

No 10 has drawn up four tests on vaccination rollout, cases, hospitalisations and deaths, and the emergence of variants that will be applied to each phase.

But when pressed the Health Secretary refused to provide the numbers that will be used for each, insisting “this is a matter of judgement”.

Wearing masks on public transport could become the new norm[/caption] 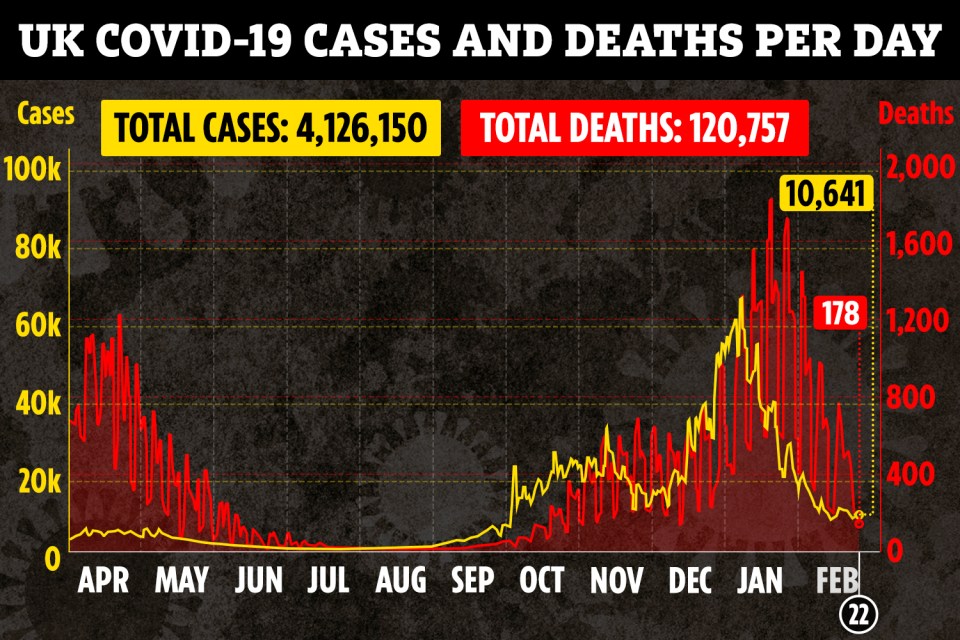 And he also defied calls from Tory backbenchers to consider speeding up Britain’s exit from lockdown if the pandemic eases faster than expected.

He said: “The reason we’ve set out no earlier than dates is that we need to see the effect of each step before being able to take the next one.

“That’s a really, really important part of this. Driven by data, not dates. It’s about seeing the real world effects. We’ve got to keep vigilant.

“That’s the reason that we’ve set out the steps five weeks apart so you can see the impact of one step before making the decision to take the next.”

“We’ve done it that way so that we can make sure that we can do this safely and as the PM says irreversibly, so this is a one way route out of lockdown.”

Mr Hancock said the aim is to move to “personal responsibility” rather than having social distancing laws “that get in the way of normal life”.

He said: “What we want to get to is a position where this is just a matter of personal responsibility and social norms.

“I would expect a world in which lots of people choose for instance when they go on the bus or a tube in London, to be to wear a mask and that just be normal, but not for it to be legislated for and required in law.”

But the PM is facing unrest on his own back benches about the slow pace of the unlocking.

He complained: “Once again it seems to be modelling not data driving decisions.”

Sir Charles Walker added: “If the data is strong, these dates should be brought forward to open up the economy.”

Under the plan all schools will return on March 8, and rules will be relaxed to allow two people to meet outside for a coffee or picnic.

Then on March 29 outdoor gatherings will be extended to two entire households or the rule of six, and the stay at home order will be scrapped.

Shops, beauty parlours, gyms, and theme parks are set to reopen on April 12, and pubs and restaurants will be able to serve again but only outside.


Thousands refuse vaccine in Germany and France after scaremongering by politicians

On 17 most restrictions on mixing outdoors will be lifted with up to 30 people allowed to gather, and football stadiums will reopen with limited capacity.

Pubs and restaurants will also be able to serve indoors from that date, and international holidays could resume.

Finally, on 21 June the remaining restrictions are set to be axed meaning large venues like nightclubs and business conferences can reopen.

India on track to have its largest...

All Brits who have to go into...

Brexit Britain must look to In...