LONDON could face more lockdown rules next week Sadiq Khan has warned as the capital is at a “tipping point” in the fight against coronavirus.

The London Mayor said today he needed to be “straight” with Londoners by warning them that more restrictions are likely to be brought in “very soon”.

Londoners could be given fresh restrictions next week[/caption]

Mr Khan told LBC today: “We are at a very serious tipping point. This virus is accelerating in every part of London.

His comments are a reference to the PM’s plans a for a new three-tiered approach to local lockdown, expected to be rolled out next week.

Mr Khan added: “One of the things we’re discussing is… what we think the right level we should be.

When asked if people should expect measures to come in next week, Mr Khan said “yes they should do”.

Chancellor Rishi Sunak announced an extra package of financial support to give businesses forced to close a furlough-style scheme to see them through a tough winter.

It is expected that this announcement will be followed by Boris Johnson introducing his new local lockdown system with some areas with the worst case numbers being forced to close pubs and restaurants.

Mr Khan said the level 3 restrictions are akin to the national lockdown earlier this year, and the most relaxed rules follow the rule of 6 and 10pm curfew.

The number of London cases could be inflated by students who have moved to university but have tested positive and the case was registered to their home address, the Evening Standard has reported.

An analysis of 412 positive cases in Richmond since September 20 found that out of 212 the council had postcodes, 49 of them were for people in Leeds, Exeter, Manchester and Durham.

The West London borough of Richmond is the capital’s worst hotspot, with an infection rate of 112.1 new cases per 100,000.

But Mr Khan warned Londoners not to be “complacent” because infection rates aren’t as bad in their particular area.

And this is still much lower than the high-risk areas in Northern England under more severe restrictions.

Almost all of the London boroughs have seen coronavirus cases rise in recent weeks, with Richmond now ahead of Redbridge as the latest hotspot.

Richmond Park MP, Sarah Olney, said: “We don’t actually know what is behind this and we don’t know if there is a specific reason.

“But I want to reinforce to local people to keep following the guidelines – hands, face, space – maintain social distancing, wash your hands, wear a mask when you’re in enclosed spaces or public transport.

“I think if everybody is aware of the guidance and does their very best in all circumstances to try and abide by it then I’m hopeful that we won’t see any further spikes.”

Cases have risen to 222 in the wealthy borough, up from 89 in the previous week.

It is currently in the high-risk category, under the tier system Boris Johnson is set to unveil next week to manage coronavirus outbreaks.

The PM’s new system plans to tackle high risk areas with rising infections, while allowing lower risk spots to carry on mixing households and going to the pub.

It comes as 10million Brits in the North of England face a looming lockdown on Monday, with pubs and restaurants ordered to shut.

Tier 1 will see current social distancing measures, the “rule of six” and a pub curfew of 10pm enforced.

And in Tier 3, people will not be able to mix households and pubs, restaurants and other hospitality businesses will be shut.

At the London Assembly on Wednesday, Mr Khan said Redbridge, Newham and Tower Hamlets were areas of concern in the capital, and he also noted the rising rates in Richmond.

However, while infection rates are rising throughout the country, death rates and hospitalisation from the virus still remain relatively low.

At the peak of the pandemic on April 8, 1,445 deaths were reported, a stark contrast to the levels being seen now.

Professor John Edmunds, who sits on the Government’s SAGE committee, said it would not be long until the health service would be stretched in the North of England.


Daily Covid cases fall by almost 4,000 in 24hrs but deaths highest in 3 months

He denied scientists were “holding a gun to the PM’s head” on the restrictions.

“It’s the virus holding a gun to the PM’s head,” he said.

The current infection rate is still believed to be smaller, however, than at the peak of the pandemic, when it is likely 100,000 cases were being reported every day through March and April.

Richmond is now seeing the highest infection rates in London[/caption] 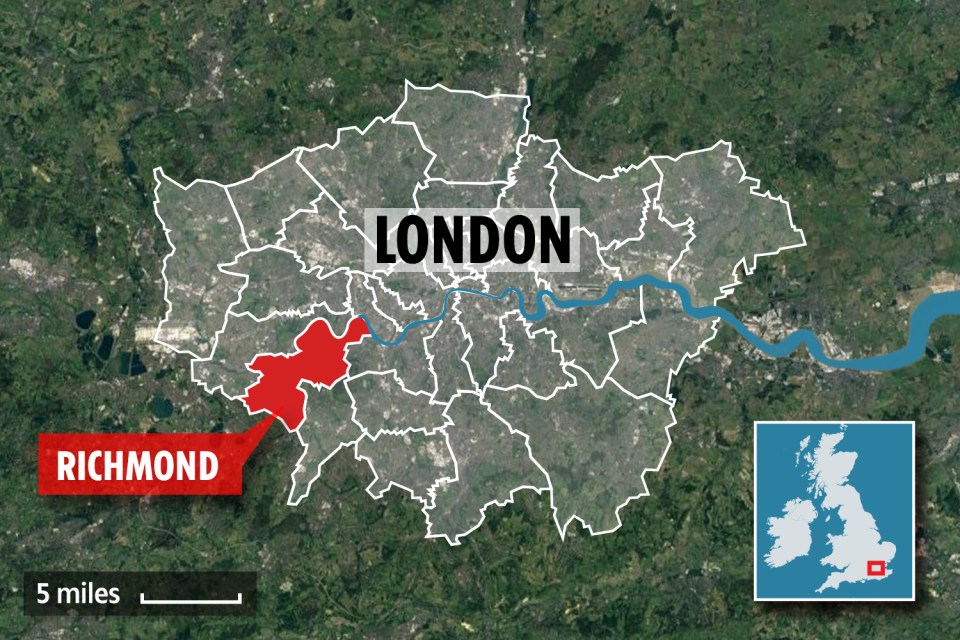 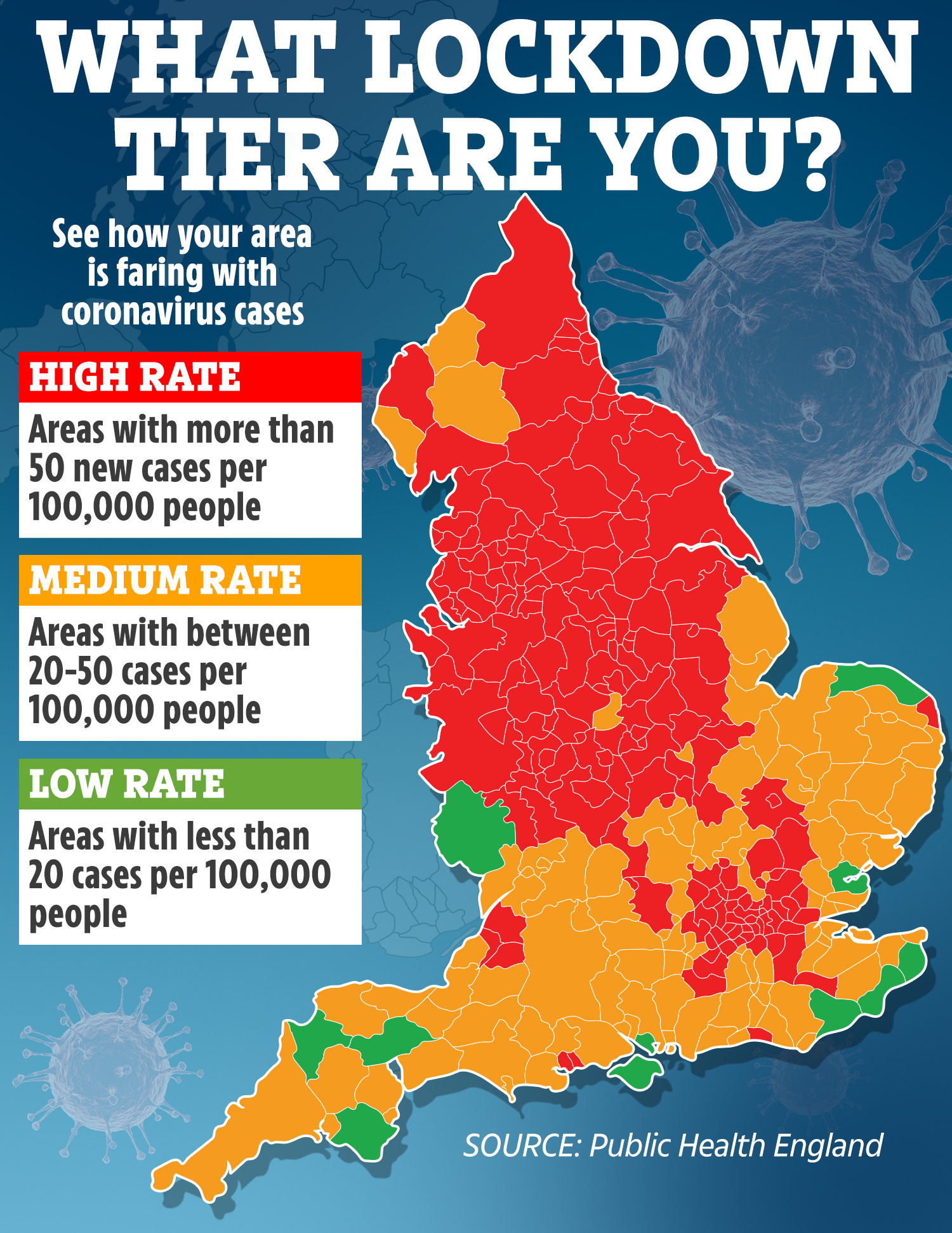 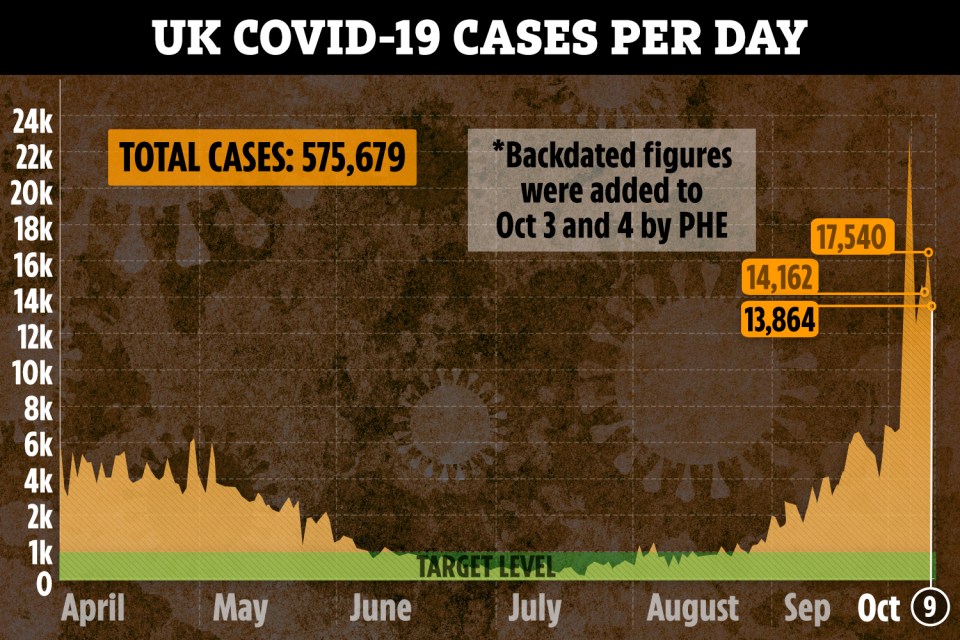 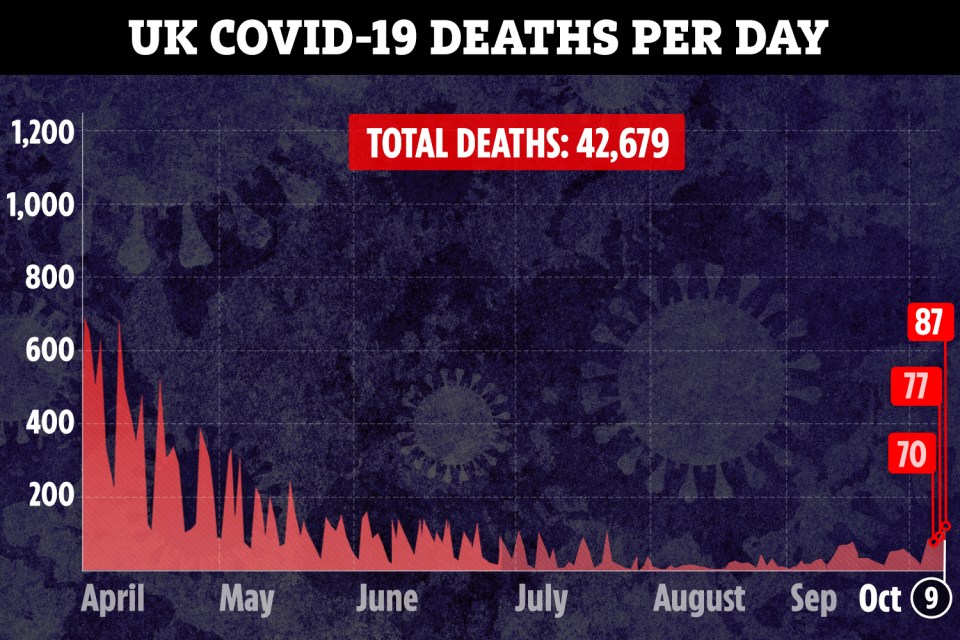 
Daily Covid cases fall by almost 4,000 in 24hrs but deaths highest in 3 months

New furlough scheme to give worker...