LEICESTER’S Mayor today blasted the Government for not getting them coronavirus data quick enough – ahead of an official decision later on whether to lift the city’s lockdown.

Sir Peter Soulsby said this morning that having the full picture would have prevented a lockdown from “ever being necessary” and said the people would be furious if it continued. 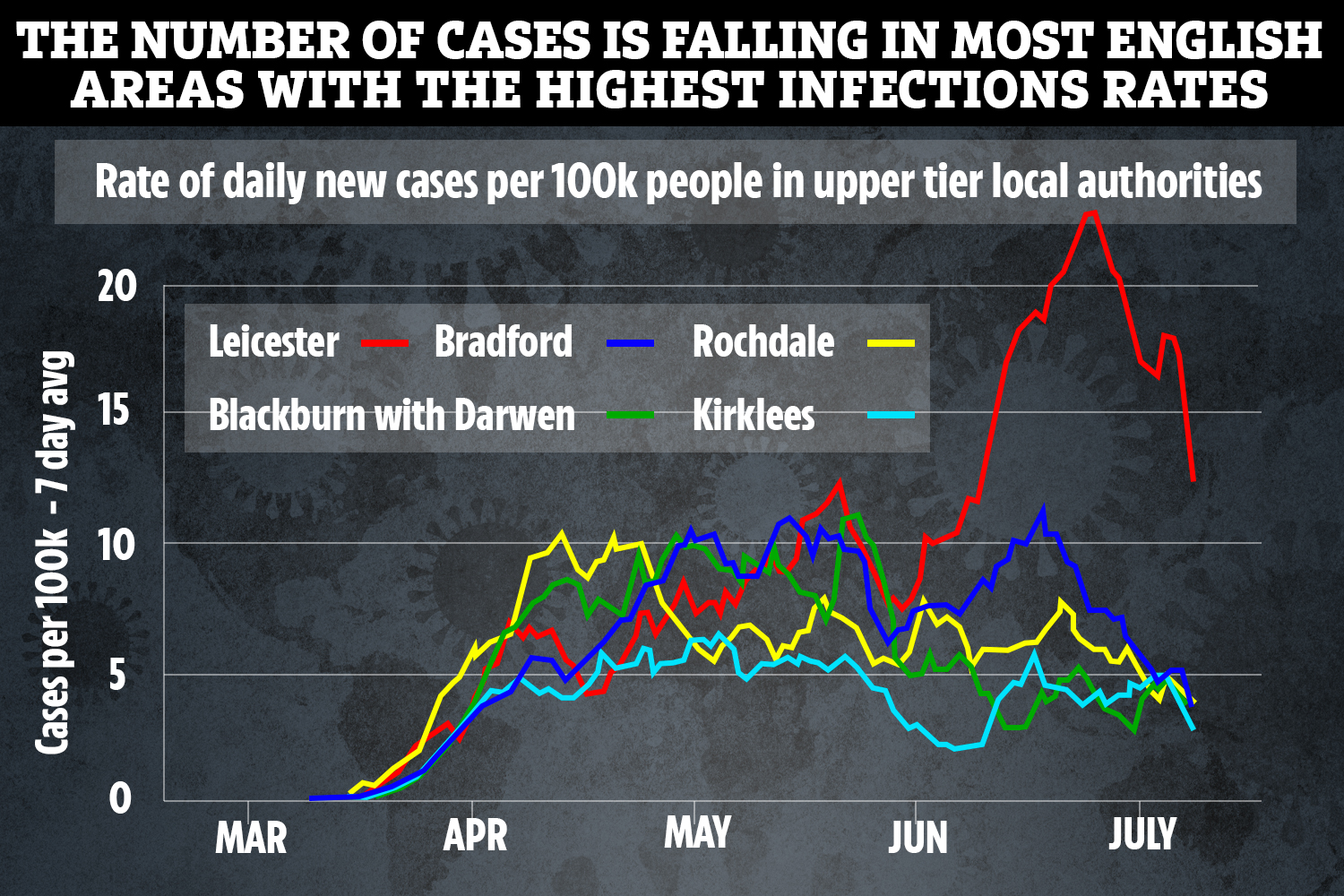 The city was the first in the UK to be put back into lockdown last month after a spike in cases.

And the Health Secretary is expected to review the measures later today.

Testing centres swooped on the city and people were encouraged to stay home. Shops were shut up again and pubs and restaurants did not open on July 4 ass in the rest of the country.

Asked what his reaction would be if the Government announced a further two-week lockdown, the city’s mayor told BBC Radio Lecieser: “I think if we are told that, there are going to be an awful lot of Leicester people who are very angry indeed.

“It was quite clear that it was a political decision taken without the advice of Public Health England (PHE) to take us into this lockdown in the first place.

Sir Peter also told Sky News: “I’m just very angry and frustrated because we’ve now, well into the lockdown, begun to get some data from the government that actually shows where the virus is and where it isn’t in the city.

“We’ve been asking for this for weeks.”

He said there were some clusters of the virus in parts of the city, but most of it was now corona-free.

“If we had this before, we could have used it to intervene – as Blackburn and other places are using it to intervene now – with those neighbourhoods to prevent the lockdown ever being necessary.”

The lockdown covers the city of Leicester as well as surrounding areas including Birstall, Beaumont Leys, Glenfield and South Wigston.

It has been suggested that families living in closer quarters, combined with a higher population of people whose English is a second language, may have contributed to the spike in cases.

Workers in cramped clothing factories have also been blamed, with Police and the National Crime Agency investigating possible links to modern slavery. 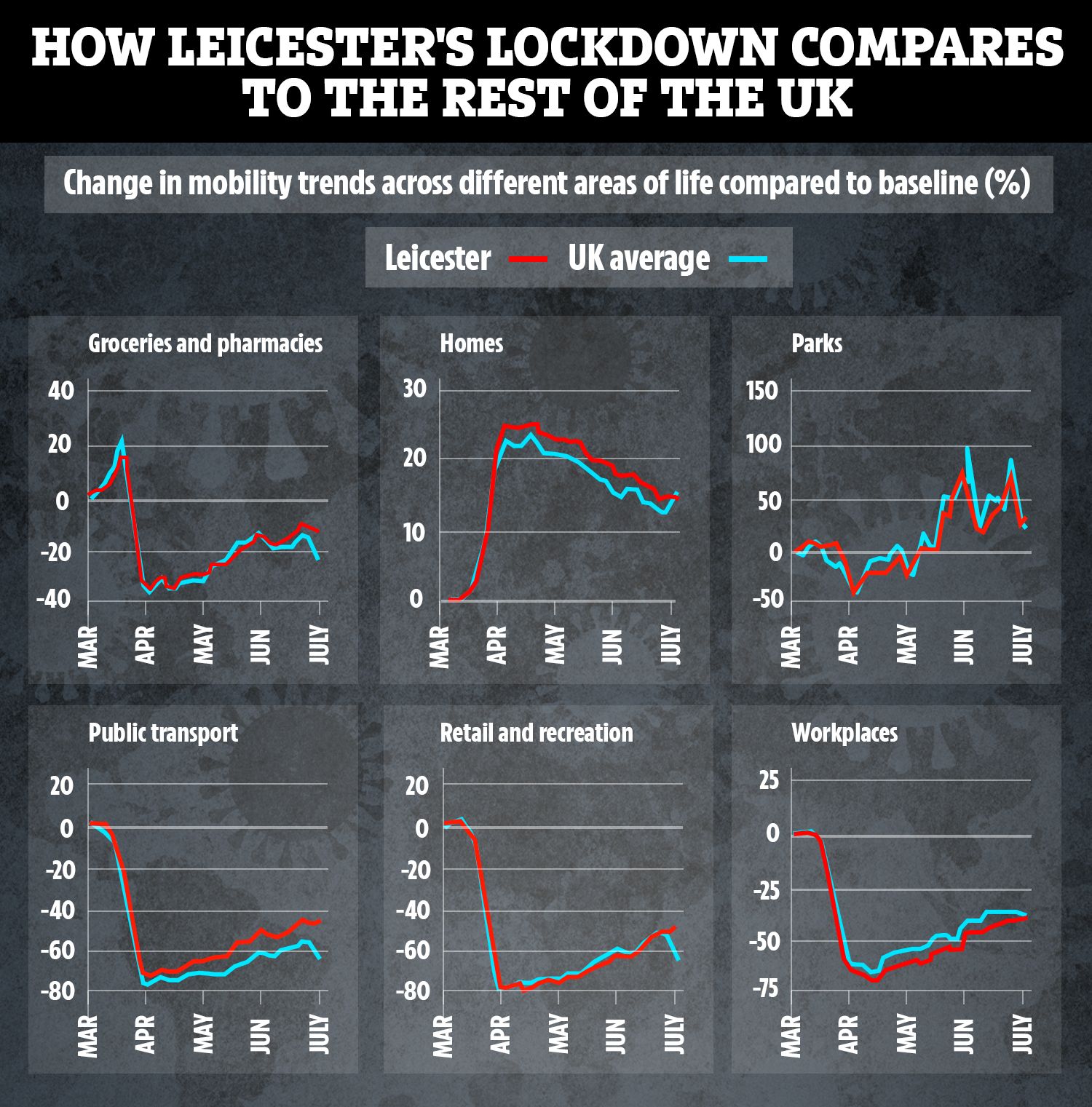 Cops checking cars as part of the local measures[/caption]

But Sir Peter told Sky News there is “no evidence whatsoever” to show coronavirus was being transmitted in clothing factories.

“There’s nothing in the data that suggests it is transmitting in places of work,” he said.

It was 143.6 in the seven days to June 28, just before the local lockdown was imposed.

Mr Hancock told the House of Commons on Monday they would look at 14 days worth of information on case numbers in Leicester on Thursday – and make an announcement about changes as soon as possible.

He said: “We’ll look at (case data) on Thursday of this week and make a public announcement as soon as is reasonably possible about whether and any changes can be made to the situation in Leicester.”

Mr Hancock revealed flare-ups are being “swiftly and silently” dealt with.

He said more than 100 “local actions” are being taken across the country each week.

Professor Jonathan Van-Tam said a lockdown exit plan for the city depends on value judgments by public health professionals on when coronavirus rates are “consistently and obviously” falling.

Mr Van-Tam told the BBC that data published on Saturday showed the city is “really quite an outlier” compared with anywhere else in the country.

The latest figures for Leicester show a seven-day rate of 126 cases per 100,000 people, compared with figures of 17.8 for Leicestershire as a whole, 9.3 in Derby and 5.4 in Nottingham.

Mr Van-Tam told the BBC: “The situation has improved but it needs to go further.”

He said that, while it would not be his decision to end the lockdown, doing so “can’t be rushed”.

BACK TO WORK YOU GO

Pressed on whether Leicester’s lockdown is likely to be lifted, Mr Van-Tam said: “With any of these things, usually the way that one approaches them from a public health perspective is to take a phased approach.

“I think that’s a reasonable expectation to set.”

China’s economy roars back to grow...

One in three firms are preparing t...