FURIOUS Boris Johnson has blasted “appalling” scenes of violence in Brixton last night as thugs attacked police and smashed up their patrol cars.

Officers were forced to back away from screaming crowds pelting missiles at them as a street party turned into a riot in South London – and one even pulled out a sword.

Twenty-two officers were injured in the chaos with two needing hospital treatment after being called to reports of a “large unlicensed music event”.

Hundreds of people were seen on the streets with cops issuing a section 60 dispersal order in an attempt to stop the violence, but police were forced to leave the scene and were unable to get it under control.

The PM’s spokesperson lashed out at the violence this lunchtime and warned that justice would be coming: “These were appalling scenes.

“Violence against the police will not be tolerated.

“Anyone who assaults the police or emergency service workers should face the full force of the law.

“We will be launching a consultation on doubling the sentence for assaulting an emergency worker.

“The Home Secretary has made the point that at the weekend we were coming to the praise of police officers coming to the scene of the Reading attack.

“Attacks and assaults on the police are completely unacceptable.”

“This violence is despicable. We wish our injured colleagues all well.”

Conservative Mayoral candidate Shaun Bailey said: “This is what London looks like when the Mayor loses control of the streets. Surging crime over the past four years, violence at the Black Lives Matter protests and now the horrific scenes we saw last night in Brixton.

“It’s time for Sadiq Khan to show leadership and stop blaming others when things go wrong.

“He needs to take responsibility for the safety of both Londoners and his police officers. And he needs to do it today.”

It is the latest in a string of embarrassing incidents for Met Police – after officers failed to stop Winton Churchill’s statue being defaced, and refused to arrest Extinction Rebellion activists earlier this year.

Others were filmed screaming as two youths climbed on top of a cop car and started to smash it with a bat.

Footage later showed a cop car with a broken windscreen left on the side of the road as the riots descended into chaos.

The string of videos from last night also show a group of cops having to back away from youths as they storm towards them throwing objects.

In a clip, a person can be heard saying: “They have run the police out of here.”

And shocking videos uploaded to social media even appeared to show people involved in a terrifying knife fight.

She said: “Just last weekend, the whole country came together to praise our heroic police officers for putting their own lives on the line to keep us safe. I’ll be picking up with the Met Commissioner immediately.”

Met Police today confirmed a “small number” of police cars had been damaged, with four people arrested for assault and public order offences.

The news comes after thirty-eight police officers were injured in the “indefensible hooliganism” in demonstrations against the Black Lives Matter movement.

It’s still illegal to gather in groups of more than six outside. 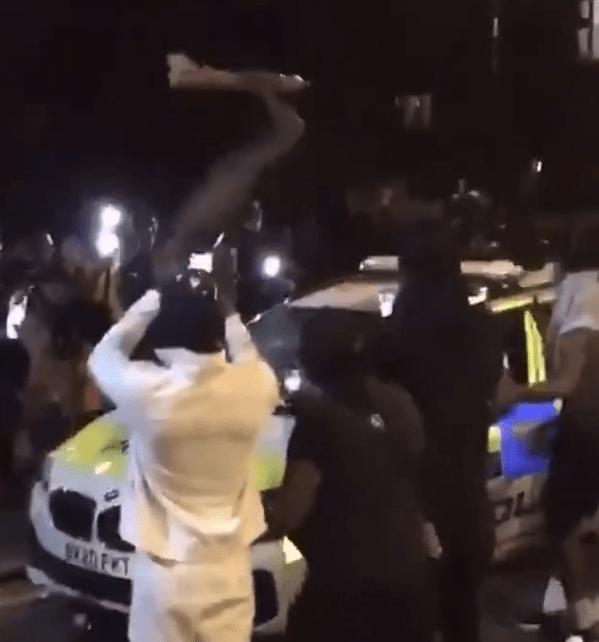