BORIS Johnson poured cold water on the idea of adding more countries to the green list later this week – as he warned it would be a “difficult year for travel”.

In gloomy comments the PM warned Brits there would be “hassle and delays” at Britain’s borders for the time being to keep Britain safe from importing the virus.

Boris Johnson played down suggestions that travel could be expanded[/caption]

Boris told reporters this afternoon: “It will be a difficult year for travel, there will be hassle, there will be delays I’m afraid, because the priority has to be to keep the country safe and stop the virus coming back in.”

It is another hint that ministers are unlikely to lift quarantine for double-jabbed Brits returning from abroad anytime soon in another blow to holiday hopes.

Business secretary Kwasi Kwarteng said this morning that the PM will take a “safer rather than sorry” approach to reopening our borders this summer.

And he insisted new figures that show just one in every 200 arrivals from amber list countries test positive “don’t tell the full picture”.

His remarks come with No 10 under increasing pressure to drop its draconian approach to international travel.

Millions of Brits are missing out on a break in the sun while across the rest of Europe holidays are restarting again.

Germans have flocked to beaches in Spain, Portugal, and Greece to escape the gloomy weather.

Mr Kwarteng was challenged on why we can’t also visit those countries given the low positivity rates among arrivals.

“But you can appreciate that we want to keep people as safe as possible and that’s why we’ve maintained the amber list.

“I totally get the frustration. For me it’s been very difficult because I want to go on holiday but I’ve chosen not to because of the restrictions.

“It’s a difficult one to balance. It’s encouraging, the data we’ve seen from amber list countries.

“But at the moment we want to take an approach that’s more safer rather than sorry.”

Ministers are piloting a scheme that would allow the fully-jabbed who have come into contact with an infected person to escape quarantine.

There have been reports that approach could be extended to returning holidaymakers to open up amber countries for travel, too.

But officials cautioned that no decision will be made on the idea until much later on in the summer.

A Whitehall source told Politico: “We know the vaccines are effective and we want to minimize interruption to people’s daily lives.

“So it is clearly an attractive policy if it can be shown to be safe — there are pilots ongoing.”

His remarks came as a top Public Health England medic hinted double-vaccinated Brits won’t have to isolate after foreign trips in future.

Dr Susan Hopkins said there may be “alternatives to isolation” for holidaymakers who have received both of their Covid jabs – but warned that Brits should stick to home holidays this summer.

Asked if there is a chance those who have had two jabs could go abroad, she told the BBC’s The Andrew Marr Show: “We’ll be looking at the evidence from other countries.

“We’ve talked a lot to countries like Israel who are ahead of us in the vaccination campaign, and they are now really looking at allowing people to come into their country who’ve had two vaccines and not needing to isolate.

“And they are allowing their population to travel more.

“We will need to be alert and will need to consider how we can measure the response of these vaccines to new variants that come along.

“But we are moving steps forward, and I think that in a time in the future, I’m not sure when, I can imagine a situation where we will have alternatives to isolation for people who have two doses of the vaccine.”

When asked about holidaying this summer, she said: “It depends on the routes and the risks. That will be for Government to decide what they want to do.

“I think we should be predominantly deciding to holiday at home this summer while we get everyone vaccinated.”

This comes after data shows cases across the UK are rising again at an alarming rate.

According to Professor Adam Finn, who advises the Government on the Joint Committee on Vaccination and Immunisation, the UK is now in the grips of a third wave.

He told BBC Radio 4’s Today Programme: “It’s going up, perhaps we can be a little bit optimistic it’s not going up any faster, but nevertheless it’s going up, so this third wave is definitely underway.”

As it stands, people travelling to the UK from red list countries will have to quarantine in a specialist hotel on arrival.

A mandatory 10-day stay in one of these hotels will cost travellers £1,750 each.

If passengers leave the quarantine hotel before their 10 days are up, they will be handed a £5,000 coronavirus fine, but this figure can increase up to £10,000.

And people travelling to the UK from amber list countries have to quarantine for 10 days at home.

All amber list arrivals will also need a pre-arrival Covid test, as well as tests on day two and day eight of quarantine. 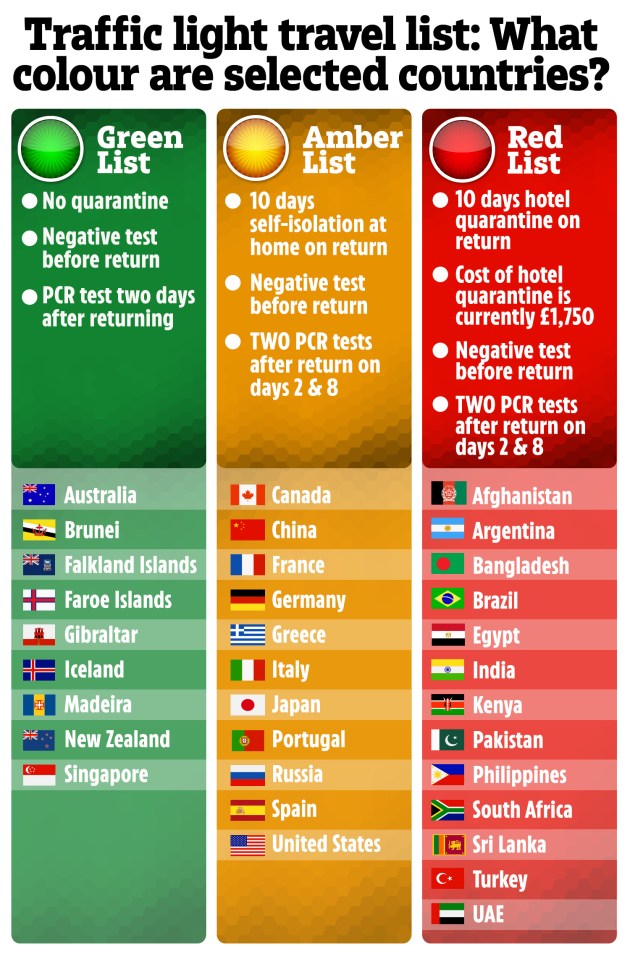 However, Brits can pay for a fourth test as part of the Test to Release scheme, meaning they can leave the self-isolation earlier.

Earlier today, Dr Susan Hopkins also warned that another lockdown could be needed if hospitals start to be overwhelmed by Covid cases.

Unlike last year, Brits now have vaccines that will help us live with the virus – but further lockdowns may be on the cards if hospitals get overcrowded later in the year.

And yesterday, Britain recorded over 10,000 coronavirus cases for the third day in a row.

The data shows that 10,321 people have tested positive for the deadly virus today, with the total number of Brits infected since the pandemic begun standing at 4,620,968.

And this was the third day in a row that cases of Covid have surpassed 10,000 – a tragic rate milestone to reach.


Tributes to girl, 13, who died after falling from roof of Tesco Express


Stalker ‘who killed model, 23, in murder-suicide’ pictured for first time

The last time daily infections were so high was February 23, when Britain was in the midst of total lockdown.