Close
Trending News
HomePoliticsEat Out to Help Out: Nearly 2/3 of Brits call on Rishi Sunak to extend 50% off scheme into September

Eat Out to Help Out: Nearly 2/3 of Brits call on Rishi Sunak to extend 50% off scheme into September

Eat Out to Help Out: Nearly 2/3 of Brits call on Rishi Sunak to extend 50% off scheme into September

NEARLY two thirds of Brits want the Eat Out to Help Out half-price meal deal scheme to be extended through September after people ate a whopping 64 million meals in August.

More than two fifths of Brits have taken advantage of Chancellor Rishi Sunak’s discount dining deal to get 50 per cent – or £10 off of their bill – on Monday through Wednesday.

But as the scheme comes to a close next Monday, 60 per cent of people want it to be given a fresh go and extended into September, according to a survey by YouGov.

The discount helped restaurants fill up with hungry diners after many almost sank during the lockdown.

Of those who had taken advantage of the cheap meals, more than three quarters – or 77 per cent – wanted it to be extended.

And a further 43 per cent said they would eat out less or not at all once the scheme ends.

Only a little over a third of people said they would dine out the same amount once the scheme is wound down next Monday.

After seeing the huge success the deal had at getting Brits out of their homes and into restaurants after a tough four months in lockdown, some venues have even rolled out their own discounts to keep their customers eating out.

A petition to have the scheme be

extended has even been started, amassing almost 12,000 signatures. 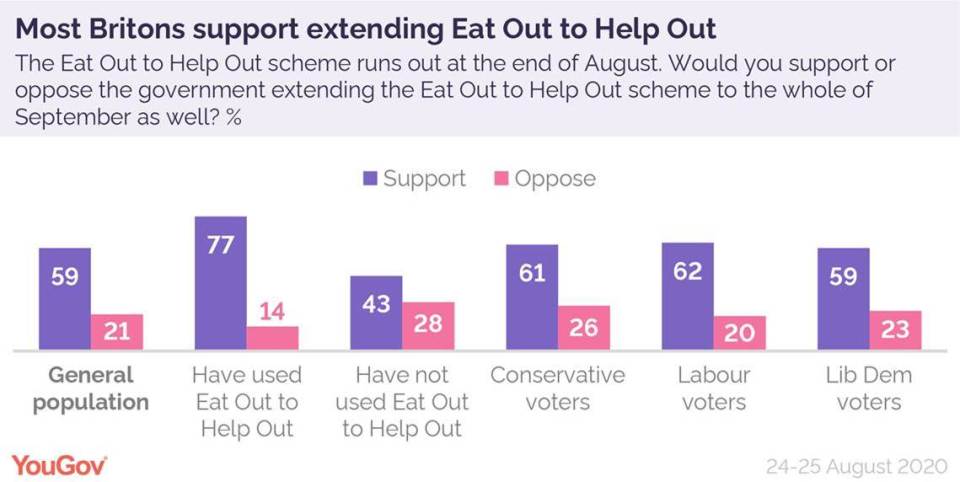 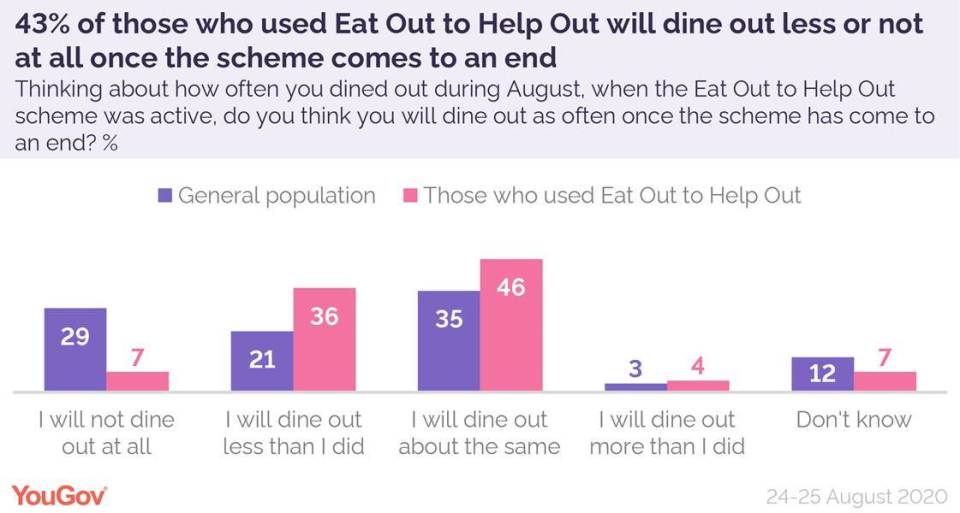 The Federation of Small Businesses (FSB) has also called on the scheme to be kept going into September.

FSB chairman, Mike Cherry, said: “We now need to see it extended to continue the critical support that it is providing for small firms as we enter a period of economic make or break.

“As we enter September with schools reopening and more people going back to their places of work, there are still strong merits to continuing this for one more month.”

The FSB added that after September the scheme should be “reactivated” in areas that have gone through local lockdowns.

A HM Treasury spokesperson said: “Part of Eat Out to Help Out’s popularity is precisely because it is a time-limited scheme – this reminds and encourages people to safely return to going out.

“The scheme complements a wider package of hospitality support that goes beyond August, including cutting VAT to 5%, paying the wages of furloughed staff, business rates relief and billions in tax deferrals and loans.”