BRITAIN is safe for people to return to the office as home working “has its limits”, the Transport Secretary said today.

Ahead of a major push next week to try and get more people back into the workplace, Grant Shapps insisted that it was safe for people to start returning.

He told Sky News that “common sense” will prevail and people should speak to their bosses about coming back in.

Whitehall bosses are worried that millions of people are still staying home, turning cities and town centres into ghost towns, and putting more jobs at cafes and bars at risk.

The Transport Secretary said this morning: “What we’re saying to people is it is now safe to go back to work and your employer should have made arrangements which are appropriate to make sure that it is coronavirus-safe to work and you will see some changes if you haven’t been in for a bit as a result.”

Anyone who was worried about their work not following the rules should go to the Health and Safety Executive, he added.

He added: “We’re absolutely clear that employers and employees need to work together to resolve this.”

Though he admitted that many firms have enjoyed home working, and it has benefited some of their employees.

However, there was a “limit, just in human terms, to remote working”.

He stressed: “There are things where you just need to spark off each other and get together in order to make progress.

“So I think common sense will prevail between employers and employees. It’s certainly what we’ve seen so far and I very much think that will carry on next week as people do start to return more often to the office.”

And the mental health of people stuck working in cramped homes was also a major factor to play, he added.

But the Government faces an uphill battle to get everyone in.

A new report from Cardiff University and the University of Southampton, said 88 per cent of employees who worked at home during lockdown would like to continue doing so in some capacity, with 47 per cent wanting to do so often or all the time.

And Mr Shapps was left red-faced today when pushing the Government’s back to work message – he was working at home.

LBC’s Nick Ferrari called him out saying: “I’m in my office in central London and you’re in your study? I am back to work, Secretary of State, you are not.”

Meanwhile, Government ministers and insiders have warned privately that not going back in could risk people’s jobs.

One Government source told The Daily Telegraph: “People need to understand that working from home is not the benign option it seems.

“We need workers to be alert to what decisions their bosses may take in the weeks ahead. If they are only seeing workers once a fortnight then that could prove problematic for some employees in the future.

“We want employees to be careful what working arrangements they accept. Suddenly the word ‘restructure’ is bandied about and people who have been working from home find themselves in the most vulnerable position.”

And a Cabinet minister said: “There will be some economic consequences of shutdown. Companies will realise some people weren’t working as hard as they thought … There is going to be a review of how productive people are.”

Next week a nationwide advertising campaign is expected urging people to return, similar to the huge adverts place telling people to stay at home during the pandemic’s peak.

Mr Shapps laughed and admitted “that is true”.

“For this morning’s round this works very well. Last week when I spoke to you, same time… I was in Cardiff.”

“I was actually going in on an ad-hoc basis throughout.” 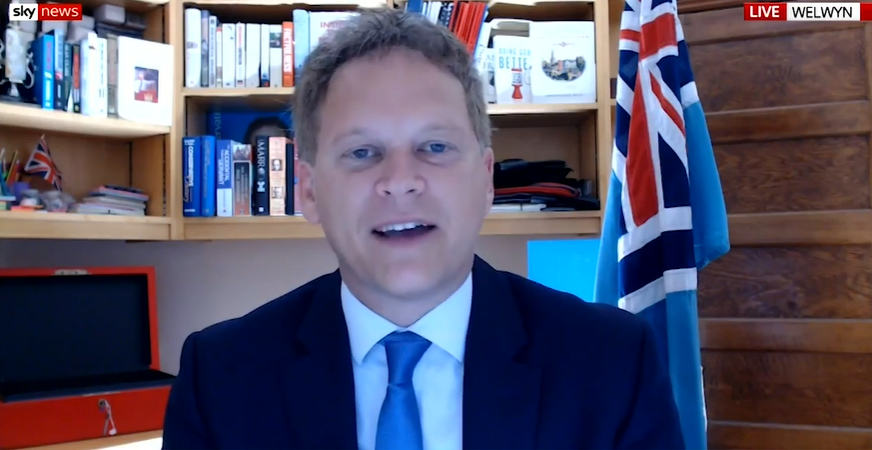