The biggest investment in defence since the Cold War will be used to create a new space command, cyber force and artificial intelligence agency, the PM proudly declared today.

HMS Queen Elizabeth will lead a British and allied task group across the Mediterranean, the Indian Ocean and East Asia[/caption]

In a defiant speech outlining an exciting vision for the nation’s post-Brexit future, the Prime Minister declared the “era of retreat is over” and he would give the nation’s defences their biggest cash injection for decades.

In a rallying cry to critics, he said he would “refuse” to vindicate any more gloomy forecasts about the state of Britain today by “picking up the scalpel” to defence budgets yet again.

Blasting former Governments for having “trimmed and cheese-pared our defence budget” he said that “once lost, they could never be regained”.

Instead he promised: “The era of cutting our defence budget must end, and it ends now.”

The Government will spend an extra £24.1 billion over the next four years on defence – £16.5billion more than the Tory manifesto promised last year.

“We’re going to use extra spending to restore Britain’s position as the foremost naval power in Europe,” he declared.

Several new ships will be built in what the PM hopes will “spur a renaissance” in shipbuilding in Glasgow and Rosyth, Belfast, Appledore and Birkenhead.

But he dodged questions on how the huge splurge would be paid for – such as a rumoured slash to foreign aid spending.

And he refused to say whether troop numbers would be cut.

Instead he suggested some may be moved around within the armed forces, stressing: “there will be no redundancies.”

Boris stressed that new advances in technology would make ammunition “redundant” and new “energy weapons” would be able to destroy targets “with inexhaustible lasers”.

He said Britain must stand alongside our allies and in order to this “we need to upgrade our abilities across the board”.

And he hit back at Sir Keir Starmer and his critics, who questioned why the spending was taking place at a time where the coronavirus crisis has ravage the country.

He hit back: “I have done this in the teeth of the pandemic, amid every other demand on our resources, because the defence of the realm, and the safety of the British people, must come first.

“The international situation is now more perilous and intensely competitive than at any time since the Cold War.”

A big chunk of the package is specifically dedicated to research and development in cyber, AI and drone warfare[/caption]

But Boris refused to rule out cutting troops[/caption]

Boris name-checked former PM Clement Attlee for helping to set up NATO, and Margaret Thatcher for finding “a path out of confrontation when she met Mikhail Gorbachev in 1984” during the high of the post-war tensions.

He added: “In each case, Britain tipped the scales of history and did immense good for the world. Now we have a chance to follow in this great tradition.”

Tory MPs lined up to praise the historic announcements and welcomed the extra cash for the nation’s defences.

David Davis praised it as the best defence statement he’d heard in the Commons in 25 years.

The largest chunk of the extra money will be spent on a “space command” that could launch Britain’s first rocket in 2022.

Billions of pounds have also been earmarked for a National Cyber Force of hackers to tackle online threats.

It will be a joint operation between the military and spy agency GCHQ.

A new Artificial Intelligence agency will be created to focus on the advances in that area.

It is thought it will be part of the Department of Digital, Culture, Media and Sport.

‘THE ERA OF RETREAT IS OVER!’

The government said the increased military spending will cement the United Kingdom’s position as the largest defence spender in Europe, the second largest in NATO, and allow increased investment in areas such as cyber and space.

The announcement comes after the head of the RAF Air Chief Marshal Sir Mike Wigston said that future wars may be won or lost in space.

Downing Street warned that threats to the country would no longer be confined to a distant battlefield, adding Britain’s enemies could reach people “through the mobile phones in their pockets or the computers in their homes.”

It said: “UK defence therefore needs to operate at all times with cutting-edge technology.

“This reverses the systematic decline in this crucial area in the last 30 years.”

Whitehall sources claimed Johnson wanted to show the US President-elect Joe Biden the UK was a dependable ally.

“This is excellent news for defence, and provides us with the financial certainty we need to modernise, plan for the future and adapt to the threats we face,” he said.

Wallace has spent the last year on an “integrated review” of the threats facing Britain and how the government plans to tackle them.

The results of that review are now not expected until the new year.

It’s thought Johnson had planned to hand the armed forces an extra £15bn but Wallace wanted more over fears the MoD could end up with barely enough to fill its funding deficit, reports say.

The Conservatives had pledged to raise defence spending by 0.5 per cent above inflation for every year in the Parliament, in its manifesto.

Critics of the move have indicated the overseas aid budget could be cut to help pay for the extra defence money.

The government has all but confirmed it’s considering temporarily reducing a commitment to spend 0.7 per cent of national income on overseas aid.

Spy agency GCHQ, pictured, will work with the military on a new National Cyber Force[/caption] 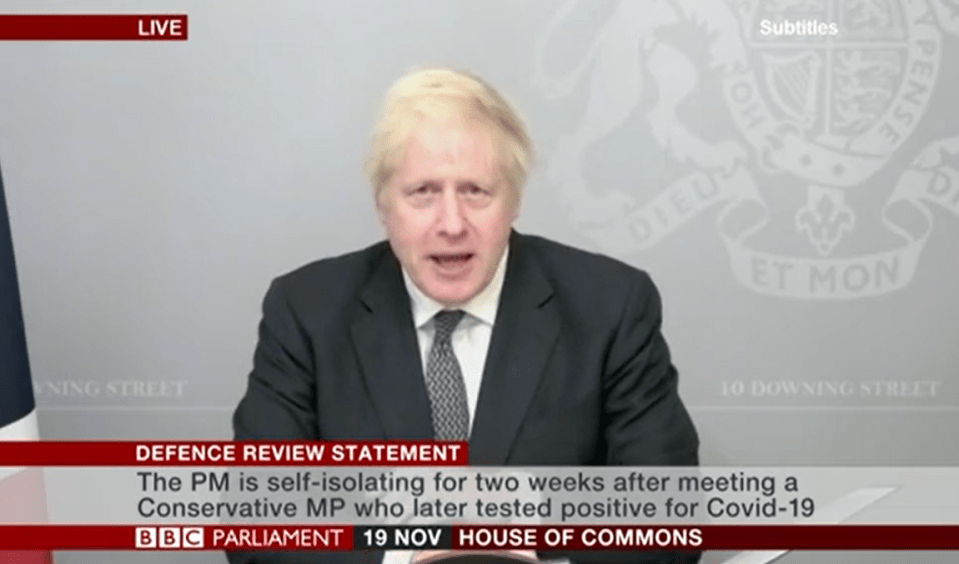