BORIS Johnson tonight confirmed Freedom Day WILL be delayed for at least a month – to save thousands of lives and stop hospitals being swamped.

At a gloomy press conference tonight the PM said current restrictions will stay until July 19 – as the NHS rushes to jab more people, quicker to beat the Delta variant.

Sobering modelling predicted hospital admissions would soar to the peak of the first wave if Mr Johnson ploughed ahead with the roadmap on June 21.

A sombre PM said tonight: “Today I cannot say that we have met all our four tests for proceeding with step four.

“On June, the 21st, I think it is sensible to wait just a little longer.

“Now is the time to ease off the accelerator. Because, by being cautious now, we have the chance in the next four weeks to save many thousands of lives by vaccinating millions more people.”

Flanked by his top scientists, he assured a short delay would buy more time in the race against the virus.

He warned that there were “millions of younger adults who have not been vaccinated” – but that 23 and 24-year-olds could book jabs from tomorrow.

And he warned that “sadly”, some elderly and vulnerable may still get ill, even if they have had two jabs.

Yet he gave hope for July 19 relaxing all rules, saying he was hopeful he would not need to delay again.

It was also announced that:

And he stressed there was no need to slam into reverse and put in place extra restrictions again.

Brides and grooms were also given a much-needed boost as the PM scrapped the 30-guest cap on weddings.

Boris said he would review the data again on June 28 – and suggested that could be eased early on July 5 if the Covid outlook improves, but that was unlikely.

MPs are set to vote on the roadmap delay within days – with fuming backbenchers set to savage his delay. 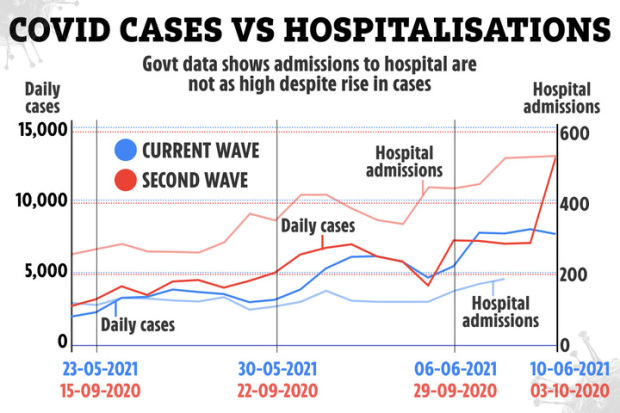 Despite anger from MPs, fresh polling today found Mr Johnson has the public on his side.

An overwhelming 71 per cent of adults support delaying Freedom Day, including 41 per cent who strongly back pushing it back.

Only 24 per cent oppose his decision, according to YouGov.

In happier news, two Covid jabs stops hospitalisation from the Delta variant by up to 96 per cent, it was found today.

Both Pfizer and AstraZeneca’s vaccines are hugely effective against severe illness when double dosed, encouraging new data has revealed.

New Public Health England data shows that after two doses the Pfizer vaccine is 96 per cent effective against hospitalisation and the AstraZeneca slashes the risk by 92 per cent.

Dr Mary Ramsay, Head of Immunisation at PHE, said: “These hugely important findings confirm that the vaccines offer significant protection against hospitalisation from the Delta variant.

“The vaccines are the most important tool we have against COVID-19. Thousands of lives have already been saved because of them.

“It is absolutely vital to get both doses as soon as they are offered to you, to gain maximum protection against all existing and emerging variants.”

Prof Chris Whitty and Sir Patrick Vallance came armed with alarming data that the Indian “Delta” variant was up to 80 per cent more infectious and was doubling in a third of places.

Hospitalisation rates are increasing by an average 15 per cent every week – and a staggering 66 per cent in the afflicted North West.

The PM warned that binning all legal restrictions on social contact on June 21 – as planned – would see the NHS inundated with Covid patients.

It means the Government’s four-step checklist to safely ease lockdown without fuelling hospitalisations has not been satisfied.

Modelling by Imperial College London warns without a delay to June 21 the Delta variant could “lead to a significant third wave of hospitalisations and deaths similar to or larger than the winter wave”.

The experts said: “Delaying step 4 by a few weeks would reduce the size of the third wave, while simultaneously buying time to more accurately estimate the characteristics of B.1.617.2 and consider other control strategies.”

And separate analysis by Warwick University shows how daily Covid admissions could hit 2,500 a day if June 21 unlocking went ahead – news which has spooked the PM.

Scientists claim delaying the end of lockdown by a month would reduce the peak in hospital admissions by half.

In a meeting on June 9, they pointed out: “These would be Covid admissions and deaths avoided rather than simply delayed.”

They concluded that longer delays prevent more hospitalisations and deaths, but a four-week pause was most beneficial.

Sage documents released today reveal: “This is partly because four weeks is long enough to ensure significantly more vaccination coverage and would push step 4 close to the school holidays, when transmission is expected to be reduced.”

However, Sage experts warn even with the four-week delay, the number of Brits being taken to hospital with the bug will still soar to 1,420 by the end of July.

They warned that there was a lot of “uncertainty” around NHS hospital admissions – with considerable “risk” with the full opening up as planned.

They said it “wasn’t possible” to know whether the NHS would be put under unsustainable pressure.

With a heavy heart the PM announced England will remain in Step 3 of the roadmap until at least Monday July 19.

There will be a review of the data on June 28, with the possibility to bring forward the unlocking to July 5 if there’s a massive improvement, but the PM appeared pessimistic about this.

The Government believes the four-week window will allow all over-40s who were jabbed in May to be double jabbed – and will accelerate this by reducing the gap between doses from 12 to eight weeks.

By July 19 ministers also hope to have offered a first vaccine to all over-18s.

Cabinet signed off on the delay this afternoon and will now have to extend emergency Covid laws due to expire on June 30.

He said that he was hopeful that they could still go forward with step 4 in another four weeks time.

But he refused to rule out another delay – only saying he was confident he wouldn’t need another one.

“We will be in a much better position as a country to continue with the full opening up,” he said.

“I confident that July the 19th will be, as it were, the terminus date, and that we’ll be able to take things forward from there.

“At that point people may want to keep social distancing, and keep being sensible, but I think we’ll be in far better position as a country.”

All over 18s will have been offered a vaccine by this point, Patrick Vallance added.

He said: “These vaccines are really highly effective against the Delta variant.” 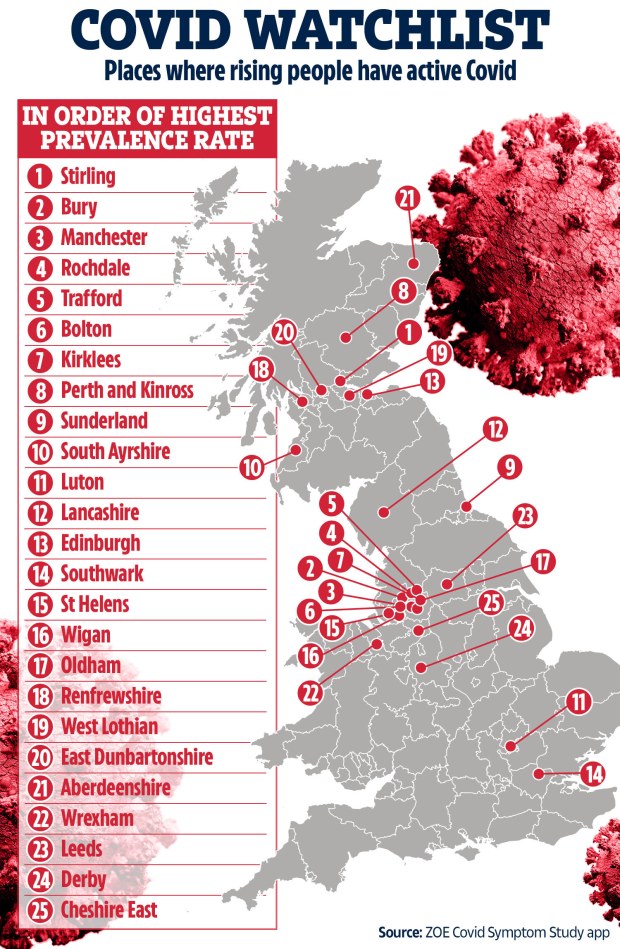 Today’s news paves the way for a crunch Commons vote on Wednesday when the PM will face a rebellion from his lockdown-sceptic backbenchers.

Furious Tory MPs today railed against the postponement, with Philip Davies branding it “completely unjustifiable” and “idiotic” while former Tory leader Sir Iain Duncan Smith lashed out against the “spiral of fear”.

However the extension will likely sail through Parliament with the backing of Labour MPs.

Sir Keir Starmer – who has supported every lockdown – threw his support behind the delay following a briefing with scientists this afternoon but called on ministers to extend financial help for cash-strapped firms. 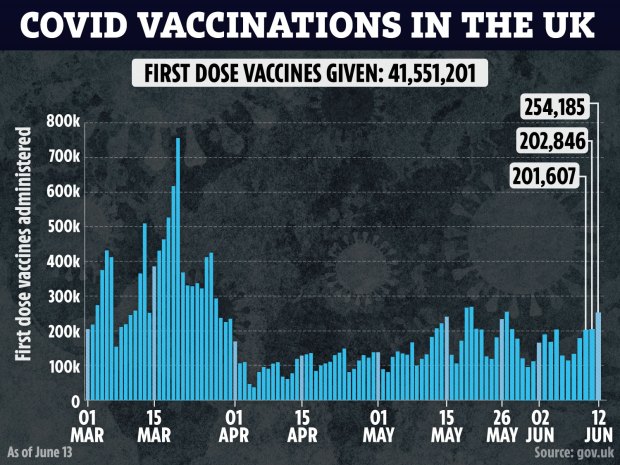 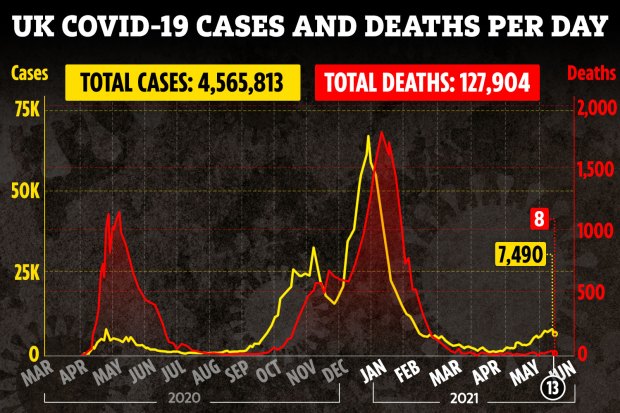 Yet the Government is not planning to pour additional financial support into businesses despite tight restrictions in place.

Downing Street said the furlough scheme will not be extended and still end in September as planned.

The PM’s official spokesperson said: “We deliberately extended furlough support well into the autumn because of the unknown uncertainty.”

Hospitality venues have been especially hard-hit by lockdown and industry bosses are warning of a £3billion economic shock from the delay – and want more cash help to get them through the worst of it.

The Nighttime Industries Association today forecast a quarter of businesses could go to the wall without more Government support.

June 14: Boris Johnson addresses the nation and revealed his plan to push Freedom Day back to July 19
June 21: The original end of lockdown under the PM’s roadmap, which has now been delayed
July 5: The PM will run the rule over the data for a two-week ‘break-clause’ review. If hospitalisations haven’t increased significantly, restrictions could be relaxed early.
July 19: The proposed new ‘Freedom Day’ date where all remaining rules should be lifted.

But the PM did make a peace offering to engaged couples by announcing the 30-person cap for weddings would be dropped.

He said “sorry for the disappointment” to couples but hoped today’s news would bring some relief.

Brides and grooms-to-be who have planned ceremonies for after Freedom Day have been racked with nervousness about whether it will go ahead.

Newlywed Mr Johnson tonight said they can now celebrate with as many loved-ones as the venue can fit while keeping social distancing.

Yet their big day will still be hampered with restrictions banning dancing – except for the first dance – and limiting receptions to table service only still.

Downing Street also announced that vaccine passports will be trialled at some Euros matches.

Thousands of spectators will still allowed to go to the F1 at Silverstone, and matches at Wimbledon.

Bosses at Silverstone have already staged preliminary talks with the Government about hosting next month’s British Grand Prix in front of a capacity 140,000 crowd.

And for the first time in 15 months some of the pilot events will be at maximum capacity.

A review into Covid-status certification is currently being led by Michael Gove – but has been pushed back until Freedom Day.


Lockdown lift could drag on to AUGUST due to Indian variant, ministers admit

Yet in a clue at what the post-lockdown world might look, the Government today revealed plans to pilot them at around 15 upcoming events.

This includes some upcoming Euros matches at Wembley as well as at indoor theatre and music venues. 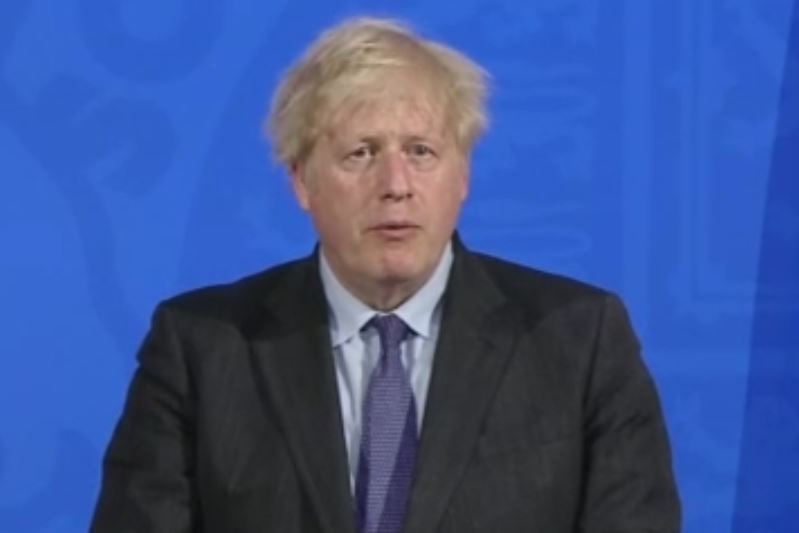 Lockdown update: Face masks and so...

‘Did they have any choice?’ Goalke...