Close
Trending News
HomeBusinessWorst financial crash coming: ‘US is the LARGEST DEBTOR NATION in the history of the world’ – legendary investor Jim Rogers

Worst financial crash coming: ‘US is the LARGEST DEBTOR NATION in the history of the world’ – legendary investor Jim Rogers

Worst financial crash coming: ‘US is the LARGEST DEBTOR NATION in the history of the world’ – legendary investor Jim Rogers

While monetary stimulus may have provided short-term relief to the financial markets, the enormous amount of debt created as a result will create negative consequences for the economy in the long-term.

That’s according to investment guru Jim Rogers, whose Quantum Fund returned 4,200 percent in the first ten years since its establishment.

Rogers told Kitco News that the rally in equities since March was largely due to the debt build-up from quantitative easing. “Six months ago, the United States was the largest debtor nation in the history of the world. Never has anybody been so deep in debt. Since then, the US has increased its debt by trillions more. If you give me a few trillion dollars, I will show you a very, very good time,” he said.

The next financial crash could be even worse than what we saw this year, Rogers warned. “This certainly has been the worst in my lifetime. We’ve had a huge rally because governments everywhere have printed and spent staggering amounts of money, but it just means that the next time it’s going to be worse still.”

On the subject of gold, the investment guru said prices still have a lot of room left to climb: “If I’m right, gold is going to go much, much, much higher before this is over. Gold may well turn into a bubble. I hope it doesn’t, because if it turns into a bubble, I’ll have to sell it and I never want to sell it. I want my children to have my gold and silver someday.” 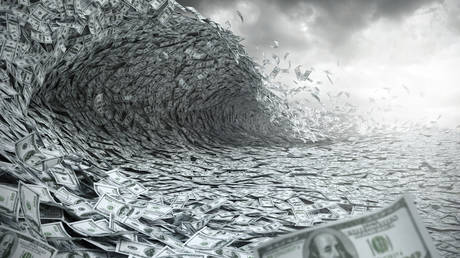