Close
Trending News
HomeBusinessWorst drop EVER: US economy plunges over 31% in second quarter

Worst drop EVER: US economy plunges over 31% in second quarter

Worst drop EVER: US economy plunges over 31% in second quarter

US gross domestic product (GDP) fell by a 31.4 percent annualized rate last quarter, marking the steepest drop in output since the government started keeping records in 1947, the Commerce Department said on Wednesday.

The previous worst quarterly drop was observed in the first three months of 1958, when GDP fell 10 percent on an annualized basis.

The new data reflects a slightly upward revision, with output previously reported to have contracted at a 31.7 percent pace during the period.

“The decline in second quarter GDP reflected the response to COVID-19, as ‘stay-at-home’ orders issued in March and April were partially lifted in some areas of the country in May and June, and government pandemic assistance payments were distributed to households and businesses,”  said the Bureau of Economic Analysis.

“This led to rapid shifts in activity, as businesses and schools continued remote work and consumers and businesses canceled, restricted, or redirected their spending,” it added.

The US economy fell at a five percent rate in the first quarter, signaling an end to a nearly 11-year-long economic expansion, which was the longest in the nation’s history.

Economists expect growth to slow significantly in the final three months of this year, to a rate of around four percent. The economy could plunge back into a recession if Congress fails to pass another stimulus measure, or if there is a resurgence of the coronavirus, they say. 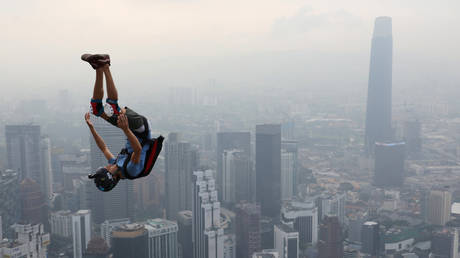