Global debt is expected to skyrocket to a record $277 trillion by the end of the year as governments and companies continue to spend in response to the Covid pandemic, the Institute for International Finance (IIF) has said.

According to the IIF, whose members include over 400 banks and financial institutions across the globe, global debt has ballooned by $15 trillion this year to $272 trillion as of September. “There is significant uncertainty about how the global economy can deleverage in the future without significant adverse implications for economic activity,” it said, warning of an “attack of the debt tsunami.”

The report pointed out that among advanced nations debt surged above 432 percent of GDP in the third quarter, which is a 50-percent increase on 2019. The United States, which has implemented one of the biggest stimulus packages in the world, accounted for almost half of that rise. Total US debt is on track to hit $80 trillion in 2020, up from $71 trillion in 2019, said the IIF.

As for the eurozone, government actions led to an increase of $1.5 trillion in public debt over the same period, to reach $53 trillion. That is still below the region’s all-time high of $55 trillion seen in the second quarter of 2014, when it was dealing with the sovereign debt crisis.

According to the research, debt levels in emerging markets rose to over 248 percent of GDP, with Lebanon, China, Malaysia, and Turkey experiencing the biggest rises in non-financial-sector debt.

“The pace of global debt accumulation has been unprecedented since 2016, increasing by over $52 trillion,” the IIF said. “While some $15 trillion of this surge has been recorded in 2020 amid the Covid-19 pandemic, the debt build-up over the past four years has far outstripped the $6 trillion rise over the previous four years.” 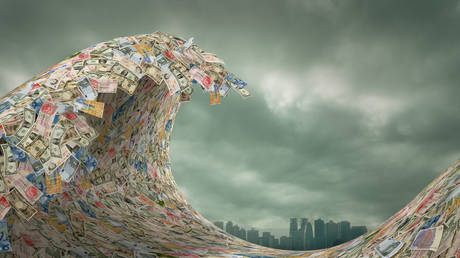 Will the United Arab Emirates with...

Priti Patel set to be given ‘forma...