With Facebook’s indefinite suspension of Trump judged ‘inappropriate,’ Boom Bust asks when the former president be allowed back on

With Facebook’s indefinite suspension of Trump judged ‘inappropriate,’ Boom Bust asks when the former president be allowed back on

Facebook’s oversight board on Wednesday upheld the social platform’s ban of former US president Donald Trump but said the company was wrong to make the suspension indefinite.

They gave Facebook six months to determine a “proportionate response.”

While the board said the term ‘indefinite’ was inappropriate because it violated Facebook’s own publishing guidelines, the company didn’t give a clear timeline of when his suspension might be lifted, RT’s Boom Bust co-host Ben Swann explains.

“The board says, ‘You can keep him suspended right now but you have to make a ruling on how long it will be’ – is it a temporary suspension, then for how long, if not, then it’s a permanent suspension, which means you’re gone forever.”

Swann continues: “I have a suspicion here that what you’re not going to see is Trump being allowed to return before the 2022 midterm elections. I think it’s very unlikely they would allow him back before that, but in the event they do, it would have to be sometime relatively soon cause you’re not going to say ‘three and a half years’… How long is it actually going to be? We just don’t know.” 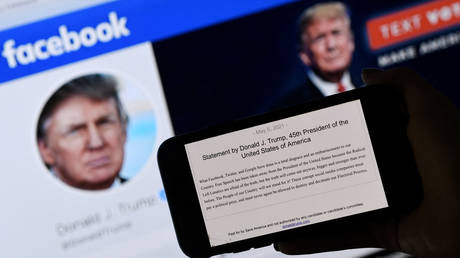 Boris Johnson under pressure to fo...