Investing in bitcoin has already yielded US electric car producer Tesla its first gains of around $1 billion. The figure leaves the company’s profits from selling its electric vehicles (EV) far behind.

Earlier this month, Tesla revealed that it had bought $1.5 billion in bitcoin in a filing with the US Securities and Exchange Commission, vowing to accept the cryptocurrency as a form of payment for its products in the near future. The news immediately sent bitcoin’s price surging to a new high.

According to data tracked by Bitcointreasuries, Tesla’s paper profits from its investment into bitcoin has amounted $1.08 billion. The gains may not be regarded as profit since the company still owns its 48 tokens.

The estimated $1.08 billion gain is nearly 30 percent more than its $721 million revenue from electric vehicles in 2020, according to the corporation’s annual report.

Edinburgh-based investment house Baillie Gifford, one of the biggest shareholders in Tesla, called for discussion of the issue. James Anderson, a partner of Baillie Gifford, told the Times he was “content” with the $1.5 billion purchase of bitcoin. However, the investors are planning to put limits on the size of bets of this kind. 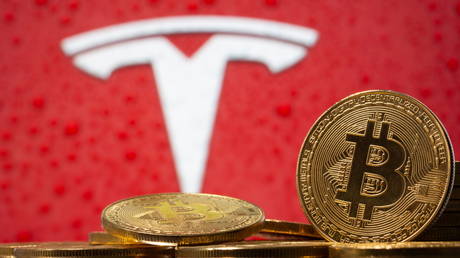