Watch out, Bezos! Elon Musk on track to become THIRD-RICHEST person on the planet

Watch out, Bezos! Elon Musk on track to become THIRD-RICHEST person on the planet

Billionaire Elon Musk is set to become the world’s third-richest man, after his electric-car company Tesla is set to join the prestigious S&P 500, an index of America’s top 500 corporations.

Musk’s wealth grew by $15 billion to about $117 billion as the announcement sent Tesla shares 14 percent higher in after-hours trading on Tuesday. The company’s stock is up about 335 percent year-to-date. With a market capitalization of over $400 billion, Tesla will be one of the 10 most valuable companies on the index when it joins it on December 21.

According to The Guardian, Musk’s wealth rose around $90 billion during 2020. He is Tesla’s largest individual shareholder, closely followed by Oracle CEO Larry Ellison.

Musk’s gain would thus knock fellow billionaire and Facebook CEO Mark Zuckerberg down a notch from the Bloomberg Billionaires Index. Zuckerberg’s net worth is currently hovering at around $106 billion.

Amazon’s Jeff Bezos is number one on the list, with a staggering total net worth of $184 billion, followed by Warren Buffett, with his $129 billion fortune. Changes have not been yet made to the Bloomberg index. 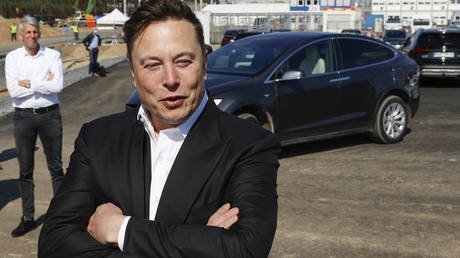