Crude shipments from oil-rich Venezuela have hit new lows, tumbling in June to levels unseen since 1943. Caracas is struggling to reach buyers for its crude due to increasing US sanctions.

Venezuelan state-owned oil company PDVSA carried around 379,000 barrels per day (bpd) of crude and refined products, according to Refinitiv Eikon data and shipping documents seen by Reuters. According to this data, June’s exports are around 18 percent lower than they were a month earlier.

Scarce exports include 130,000 bpd sent to Europe, which were legal under exemptions for debt payments and swaps. Supplies to Cuba rose by around 15,000 bpd to reach 82,300 bpd in June. Exports continued to fall as the Trump administration tightens sanctions to cut Venezuela’s oil exports, one of the main sources of the South American country’s revenues.

Mexican businesses became one of the latest victims of US political pressure against Venezuelan President Nicolas Maduro. Earlier in June, the US Treasury’s Office of Foreign Assets Control (OFAC) added Mexican companies, oil tankers, international shipping firms and individuals to its list of sanctioned entities.

The US plans to extend restrictions to include an additional 50 vessels to the list. The threat has already forced some tankers sailing towards Venezuelan shores to turn around, according to Reuters. Meanwhile, tankers already loaded with Venezuelan oil are reportedly idling at sea across the world, unable to find buyers for their cargo. It is believed that at least 18.1 million barrels of unsold oil – equal to two months of Venezuela’s production – is stuck on some 16 ships. 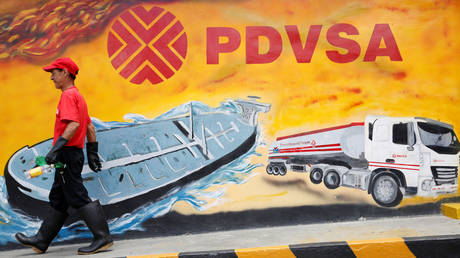 Who is Gavin Williamson’s wife Joa...