Another 1.4 million Americans are expected to have filed for unemployment in the week ending July 4, with the coronavirus pandemic still raging in the country.

The US Labor Department is set to release weekly data later on Thursday. According to economists’ forecasts, initial jobless claims are set to stand at around 1.38 million. This would be nearly 500,000 less that than the labor agency reported last week.

The number of new filings is set to remain above one million for the 16th consecutive week, bringing the total number of claims during the coronavirus crisis to around 50 million.

“Don’t expect this to fall that much until the very generous unemployment benefits expire in [their] current form on July 31st,” Peter Boockvar, chief investment officer at Bleakley Advisory Group, said earlier this month, as cited by CNBC.

Meanwhile, continued regular jobless applications, reflecting the number of people who have filed for unemployment benefits for at least two consecutive weeks, are expected to fall again. Analysts reportedly expect them to stand at 18.8 million, down from 19.3 million the previous week.

As the US economy started to reopen, some 4.8 million jobs were created in June. While President Donald Trump says the figure proves the national economy is “roaring back,” the survey, taken in the middle of the month, does not reflect the virus’ resurgence in some states, which could trigger a second wave of layoffs. 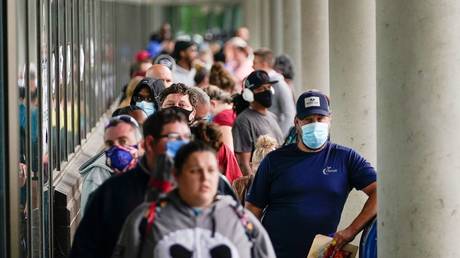 Higher taxes WILL come to pay for...