Washington has reached an agreement to include additional sanctions against Russia’s natural gas pipeline to Germany in a must-pass defense bill, Bloomberg reported on Wednesday, citing sources familiar with the issue.

According to the report, the fresh sanctions against Gazprom’s Nord Stream 2 pipeline would target insurance and certification companies working with Russian vessels on the completion of the project. They would be included as part of the 2021 National Defense Authorization Act, which must be passed by the end of the year.

The US will now have to notify its allies before imposing the new sanctions. This provision was added after House Foreign Affairs Chairman Eliot Engel of New York expressed concern that the sanctions would hurt Germany and European countries, while letting Russia “off the hook.”

“Spit on our closest friends, let Russia off the hook?” Engel said back in July. “Doesn’t sound right to me.”

Last month, the US State Department said it had extended sanctions against the Nord Stream 2 project to firms that provide services or funds to upgrade or install equipment on ships for laying the gas pipeline.

The new sanctions legislation specifies that previously enacted sanctions apply to all pipe-laying activities and insurance.

The US has been seeking to block the completion of the pipeline, aiming to derail the project that will carry Russian natural gas to Germany via the Baltic Sea. Washington has repeatedly urged Europe to buy more US liquefied natural gas instead.

The new pipeline, which was designed to boost gas supplies to Germany and other European states by 55 billion cubic meters per year, is currently nearing completion in the Baltic Sea.

Russia had to dispatch its own vessels to lay the final kilometers of the route, after Swiss-Dutch company Allseas withdrew its ships due to the threat of US sanctions in December 2019. 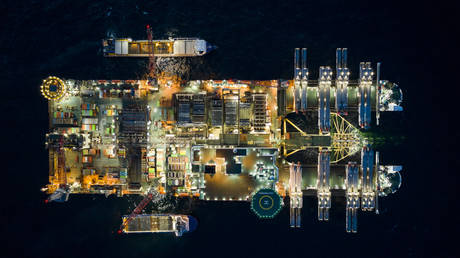 India could be the next BREAKOUT n...

Covid tier system to be ripped up...

Indonesia to set up its own bu...