The United States has been raising its imports of fuel oil from Russia over the past year and a half after the US imposed sanctions on Venezuela’s exports, Reuters reported on Monday, quoting data from Refinitiv Eikon.

Venezuela’s heavy crude oil is suitable to process in complex refineries on the US Gulf Coast, but the sanctions have cut off Venezuelan oil flows to the United States.

Last year, when the US began slapping sanctions on Venezuela, refiners started to raise their imports of fuel oil from Russia, importing a record-high volume of 11 million tons for the full year 2019, double the fuel oil imports from Russia in the previous year.

This year through June, American imports of fuel oil from Russia amounted to 5.3 million tons and are currently on track to match last year’s record imports, according to Refinitiv Eikon’s data.

This happened just after the beginning of maximum US pressure was placed on Venezuela and Maduro early last year when the Trump Administration essentially banned American imports of Venezuelan oil and oil products in an effort to stifle Venezuela’s oil export income and choke off US dollar revenues for Maduro and his circle.

There is demand for fuel oil from Russia in the United States because it is cheaper than Russia’s flagship Urals crude grade, which saw its price recently spike because of the record OPEC+ production cuts.

The margins are better for the cheaper fuel oil than from the pricier Urals, one trader told Reuters.

The Russian fuel oil is predominantly shipped to the US Gulf of Mexico—to Houston and Galveston in Texas and to Pascagoula in Mississippi, data from Refinitiv Eikon showed. 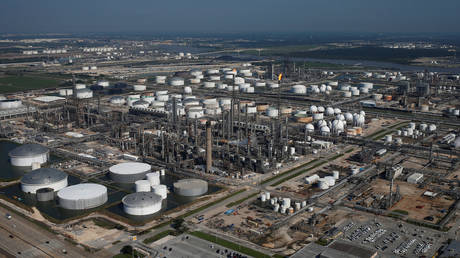