The second-largest US lender, Bank of America, has warned that the “extreme rally” seen after the market crash triggered by the pandemic formed a bubble in asset prices, and it could be about to burst.

The analysts were referring to the US Federal Reserve’s (the Fed’s) monetary actions, as well as fiscal stimulus policies designed to mitigate the devastating impact of the pandemic. According to the bank’s predictions, the Fed’s balance sheet will amount to a record 42 percent of the country’s economy this year, while the US budget deficit may hit 33 percent of gross domestic product (GDP).

Key US stock indices hit new all-time highs this week, amid hopes for a robust earnings season and as the new US President Joe Biden took office. Despite the S&P 500 and the Dow retreating from the record highs by the end of the week, they were still up 1.9 percent and 0.6 percent for the week respectively. Meanwhile, the tech-savvy Nasdaq became the only exemption on Friday as it secured another record close.

The new records came after the coronavirus pandemic triggered a historic sell-off on the markets in March. Since then, global stocks have soared nearly 80 percent, led by the US. However, the rally cannot go on forever, and the Bank of America expects a market correction in the first quarter. The analysts also warned that “a late-stage speculative blow-off” may come as “those who want to stay rich start acting like those who want to get rich,” referring to rising interest to high-risk speculation among wealthy investors.

Bank of America is not the first corporate giant to suggest the markets are heading into bear territory. Earlier this week, Goldman Sachs warned that stocks are facing a growing risk of correction. It said that the ongoing gains come as the market is still driven by good news, choosing “to largely ignore weaker data and rising infection rates.” An earlier survey by Deutsche Bank also signaled that investors see US tech stocks as the second-largest bubble risk, putting it right after bitcoin. 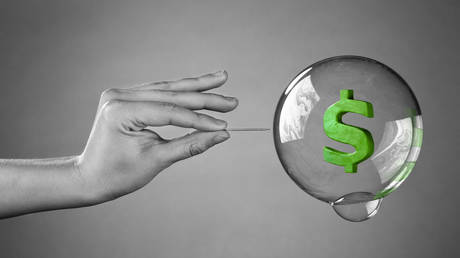