About a dozen US attorneys general are seeking a combined $26.4 billion from three major drug distributors and drug maker Johnson & Johnson (J&J) to settle opioid litigation against the firms, the Wall Street Journal reported.

According to its sources, the states want a collective $21.14 billion from the distributors, which include McKesson, AmerisourceBergen, and Cardinal Health, and $5.28 billion from J&J.

New York state is seeking to claim $165 billion, sources said, noting that an official acknowledged that the states are not likely to actually recoup that figure. A closely watched opioid trial pitting New York state against McKesson, Johnson & Johnson, and others was postponed in March due to the Covid-19 outbreak.

The central claim in the lawsuits is that drug makers overstated the benefits of opioids while downplaying the risks, while distributors allegedly failed to flag and halt a rising tide of suspicious orders.

The companies deny allegations that they are responsible for fueling the public health crisis. They have attempted to pin the blame on doctors for over-prescribing drugs and claim they complied with all state and federal laws.

Meanwhile, according to an HHS report, some 10.3 million Americans aged 12 and over misused opioids in 2018. The number includes 9.9 million prescription pain relief abusers and 808,000 heroin users.

In a landmark opioid case that went to trial, an Oklahoma judge last August ordered Johnson & Johnson to pay $572 million for its “kingpin” role in causing the opioid crisis by pushing pain pills and lying about their safety. “Johnson & Johnson, motivated by greed and avarice, is responsible for the opioid epidemic in our state,” Oklahoma Attorney General Mike Hunter then said. The sum was reduced to $465 million in November.

While choosing to sue drug makers instead of distributors, Oklahoma has also filed suit against Purdue Pharma, which invented OxyContin in 1996. Litigation had led the company to file for bankruptcy in September 2019. 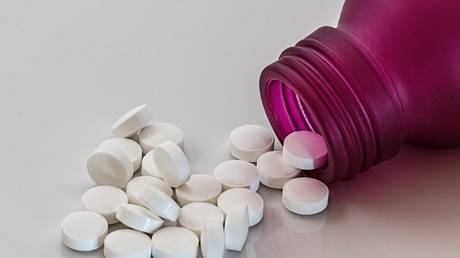