Fracking giant Chesapeake Energy has filed for bankruptcy amid soaring company debt driven by the collapse in oil prices.

The Oklahoma City-based company said it had been forced to enter chapter 11 protection because its debts of $9 billion were unmanageable. It has entered a plan with lenders to cut $7 billion of the debt and said it will continue to operate as usual during the bankruptcy process.

“We are fundamentally resetting Chesapeake’s capital structure and business to address our legacy financial weaknesses and capitalize on our substantial operational strengths,” Chesapeake President and CEO Doug Lawler said.

“By eliminating approximately $7 billion of debt and addressing the legacy contractual obligations that have hindered our performance, we are positioning Chesapeake to capitalize on our diverse operating platform and proven track record of improving capital and operating efficiencies and technical excellence,” he added.

A leader in the fracking industry, Chesapeake Energy was using unconventional techniques to extract oil and gas from the ground. The company was founded in 1989 by Aubrey McClendon and Tom Ward with an initial $50,000 investment. It has focused on drilling in underdeveloped areas of Oklahoma and Texas, largely abandoning traditional vertical well drilling, employing instead lateral drilling techniques to free natural gas from unconventional shale formations. The method has come under scrutiny because of its environmental impact.

The energy major, which has reached a market valuation of more than $37 billion, was first hit during the global financial crisis of 2008, which sent energy prices into the abyss.

The 2020 oil price crash during the coronavirus pandemic has caused the company’s untapped oil and gas reserves to decline in value, making it hard to borrow against those assets.

Chesapeake posted an $8.3 billion net loss during the first quarter of 2020. It also reported nearly $9.5 billion in long-term liabilities, and just $82 million in cash.

Earlier this month, Chesapeake skipped interest payments of $13.5 million, according to filings with the US Securities and Exchange Commission. The company had a 30-day grace period before it would be considered in default.

The energy giant’s share price has dropped more than 93 percent since January, from $172 to $11.85 as of close on Friday.

A study released by the global accountancy firm Deloitte this month said that the US shale industry is entering a period of “great compression” and could face up to $300 billion in losses and a wave of bankruptcies due to the Covid-19 pandemic. More than 200 US oil producers have filed for bankruptcy protection in the past five years. 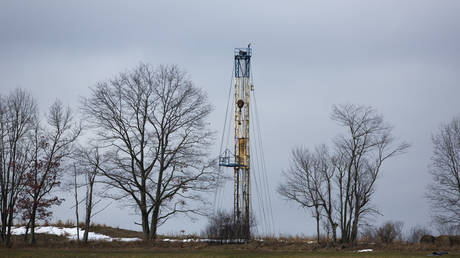