The US economy is expected to have added three million jobs in June, with the unemployment rate declining to 12.5 percent as business resumes. However, a surge in new infections is expected to slow the reopening of the economy.

The US Department of Labor will release the June jobs report on Thursday instead of the usual first Friday of the month because of the Independence Day holiday. If the report comes in line with expectations, it will mark the second month of employment gains since a record 20.5 million job losses and a 14.5 percent rise in unemployment in April.

In May, the economy unexpectedly added a net 2.5 million non-farm payrolls for the biggest gain on record, based on data extending back to 1939. A loss of more than seven million jobs had been expected beforehand.

Barclays economist Michael Gapen pointed to “the possibility that the burst in employment was temporarily fueled by [Paycheck Protection Program] lending requirements that simply pulled forward hiring that was previously expected in June.”

“If so, this would suggest that the surge in May hiring was more of a one-off event and we could see some give-back in June employment,” he said in a note seen by Yahoo Finance.

US Federal Reserve Chair Jerome Powell this week acknowledged the rebound in activity, saying the economy had “entered an important new phase and [had] done so sooner than expected.” However, he cautioned that the outlook “is extraordinarily uncertain” and would depend on “our success in containing the virus.”

The reopening of businesses has unleashed a wave of coronavirus infections in large parts of the United States, including California, Florida and Texas. Several states have even paused re-openings since late June, sending some workers home.

READ MORE: The Covid SECOND WAVE is coming. I can’t wait for governments to BLAME it all on you, me and the rest of the p*ssed-off public

“As the economy is reopening, a lot of the jobs lost have come back and activity is coming back as well,” chief US economist at TS Lombard in New York Steven Blitz told Reuters. “The problem is the virus still has a big say in determining the trajectory of the recovery,” he said.

The United States is the country hardest-hit by the coronavirus pandemic, with over 2,780,000 people infected and more than 130,000 dead. 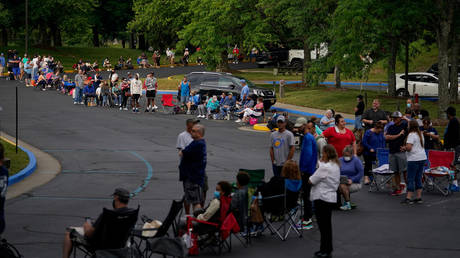