One of the doctors advising Joe Biden on the coronavirus has said the US needs to impose a complete lockdown for four to six weeks as the government can just pay everybody. Peter Schiff says such a proposal is ridiculous.

“Shutting down the economy for four to six weeks, according to this guy, would really let us jumpstart the economy because we’d really eradicate the disease – even though there’s really no proof that a lockdown is really going to do anything,” Schiff said  on his podcast. “But what this genius is proposing is that, well, it’s not really going to hurt the economy, because according to this guy – I guess he’s not just a Covid adviser, I guess he’s an economic adviser too – but what he’s saying is, ‘We’ll just have a federal government pay everybody.’”

The economist pointed out that the US government just ran a $284 billion deficit in October, which is the highest October budget gap in American history.

At the same time, more than 700,000 people filed unemployment claims, according to the latest weekly report issued on November 12. “If the economy is recovering, why are so many people still losing their jobs?” Schiff asked.

He explained that all the money printing by the Federal Reserve would do far more damage to the economy than any damage caused by Covid-19. “Even if the lockdown ended up somewhat bending the curve and saving some lives, is it really going to be worth the cost? In fact, who knows how many more people may die as a result of not only the lockdown but of the economic damage done by all the money the Fed has to print to support the lockdown.”

Talking about the growing debt burden on American retirees, the veteran stockbroker said it’s just a sign of a huge bubble economy completely supported by debt.

“It shows you how weak the economy is. Because if we actually had a strong economy, do you think 70 and 80-year-olds would have to go into debt? No! Why are so many older Americans being forced to take on debt? Because they’re broke. Because they can’t afford to survive without the debt.” 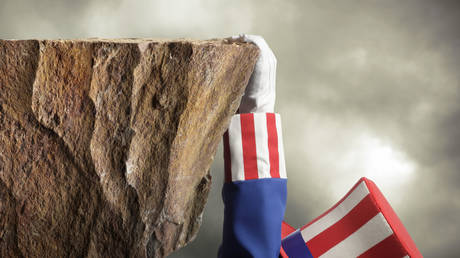