US currency will continue to weaken even as geopolitical risks fall after the presidential election, and the next stimulus package could be smaller than expected, Citi Private Bank strategists predict.

The greenback is poised to weaken further, even in the event of victory by Democratic candidate Joe Biden, whose administration could reduce uncertainty in international trade policy, they said.

“Victory for President Elect Biden means a return to more conventional governance. As the province of the President, it will result in a major shift in the way foreign policy is conducted. Alliance building will return. ‘Tariff threat first’ negotiating tactics will end,” the bank’s chief investment officer, David Bailin, and Steven Wieting, chief investment strategist and chief economist, wrote, in a note seen by CNBC.

According to the analysts, that will benefit many of the world’s financial markets, especially in emerging markets.

“Perhaps the greatest clarity post-election is for global trade. US foreign policy will enter a more predictable phase without escalating tariff threats. We see a declining US dollar and rising emerging markets as highly likely,” they said.

The US dollar index, which tracks the greenback against a basket of its peers, fell to 92.456 on Friday, its lowest level since September 2. The dollar continued diving sharply to around 92.162 on Monday amid projections over the weekend that Biden could win the US presidential election.

In Asia trading on Tuesday, the dollar bounced on Pfizer coronavirus vaccine hopes to trade at 92.813, which is still below the 94-level seen earlier this month.

Meanwhile, Asian currencies strengthened in the last few days, with the offshore Chinese yuan hitting a 28-month peak on Monday and appreciating further to last trade at 6.61 against the US dollar on Tuesday morning. The Japanese yen hit an eight-month peak of 103.18 against the greenback on Friday, according to Reuters. 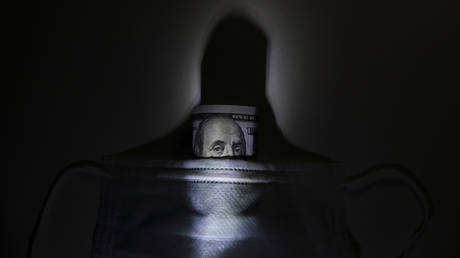 ‘Together against ISIS’: Protester...