Global markets remained steady on Tuesday after Washington and Beijing reaffirmed their commitment to their historic trade agreement even as the two economic giants have disagreements on multiple fronts.

Top US and Chinese officials in charge of the implementation of the trade deal – Chinese Vice Premier Liu He, US Trade Representative Robert Lighthizer and Treasury Secretary Steven Mnuchin – continued telephone discussions on Tuesday. The trade talks, originally scheduled for August 15, became the first formal conversation on the matter between the two sides since early May.

In brief statements after the talks, both delegations described the deal’s progress as positive. China’s Ministry of Commerce said that Beijing had “a constructive dialogue” with Washington, adding that the sides agreed “to continue pushing forward” the Phase 1 trade deal.

The US Trade Representative’s office (USTR) confirmed that the two countries are committed “to taking the steps necessary to ensure the success of the agreement.” However, Lighthizer’s office also noted that the significant increases in purchases of US products by China were also part of the discussion, together with “future actions needed to implement the agreement.”

The call came as investors globally raised concerns over increasing tensions between the two economic superpowers. Chinese stocks ended slightly lower on Tuesday, with Hong Kong’s Hang Seng sliding around 0.2 percent and Shanghai Composite falling 0.4 percent. Elsewhere in Asia, stocks were trading higher, including in Japan, with its Nikkei 225 gaining around 1.4 percent.

The Trump administration continues to attack Beijing over a slew of issues – from the handling of the Covid-19 outbreak to national security threats allegedly posed by Chinese tech companies. The last escalation saw Chinese tech firm ByteDance filing a lawsuit challenging the US government’s crackdown on its video app TikTok, which faces the threat of a ban in the US.

Washington also says Beijing is not holding up its end of the bargain in the trade deal amid the coronavirus pandemic. According to the agreement signed in January, China is supposed to buy $77 billion in additional US goods and services in 2020 and $123 billion in 2021 to meet the $200 billion total. Trade data suggests that China is far from reaching the target, despite recently boosting American farm goods purchases, including soybeans. According to the Peterson Institute for International Economics, China’s year-to-date total imports of covered products from the US stood at $40.2 billion, meaning that its compliance is less than 50 percent. 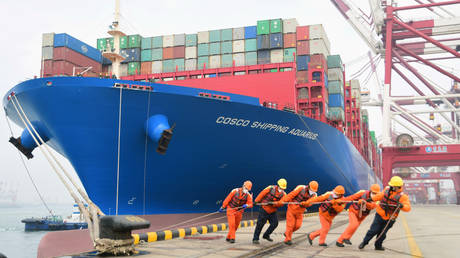