The uncertainty triggered by the coronavirus crisis that has led to delays of big-budget films offers grim prospects for the US box office, an analyst from research company MoffettNathanson believes.

Movie theaters were left high and dry after studios recently decided to reschedule their big releases, with Denis Villeneuve’s much-anticipated film adaptation of ‘Dune’ being one of the latest to be pushed back for at least one year. The delays come at a sensitive time for the movie industry which was hit hard by the coronavirus outbreak, as cinemas only reopened less than two months ago after strict lockdowns.

“2020 unfortunately now looks like a year where the domestic box office is set to plummet 81 percent,” MoffettNathanson’s Robert Fishman wrote earlier this month as cited by the Hollywood Reporter.

The industry is not going to rebound even next year, when most blockbusters are supposed to finally hit the big screens, according to the Wall Street analyst firm. Fishman forecasts that revenues from ticket sales will be by more than a third lower next year compared to 2019. The market can rebound only in 2022, possibly growing 23 percent to $9.1 billion.

In order to deal with the lack of content, MoffettNathanson’s analyst suggested partnering with streaming services, which have long been considered direct rivals of traditional theaters. Fishman says that the likes of Netflix and Amazon platforms can offer “a lifeline to get more product on movie screens.”

“Despite the lack of major tentpole releases until at least the end of November, we would recommend reaching agreements with their studio partners on alternative windowing strategies to help ease the decision making process for studios to bring back their movies,” the analyst noted.

Some industry players have already tried to adjust to the new reality by switching to online platforms. Earlier this year, Disney used its online service to release its newest film ‘Mulan’, leaving it for cinemas only in those countries that don’t have the streaming service. Apart from cashing in on the online premiere, for which the company charged $30 in addition to the monthly subscription fee, Disney also managed to boost the user base for the platform.

“While some may try to point to the studios for not taking more risk or partnering with exhibitors to come to a solution, the reality of the current stock market to hugely value all things streaming is helping convince management teams to more fully embrace the future as seen with Disney’s latest decision to move Pixar’s Soul to Disney+,” Fishman said. 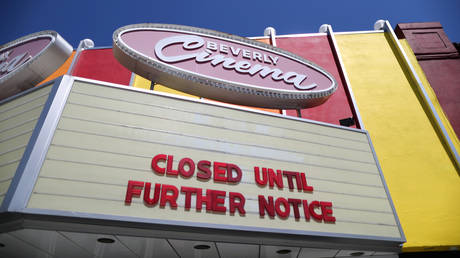